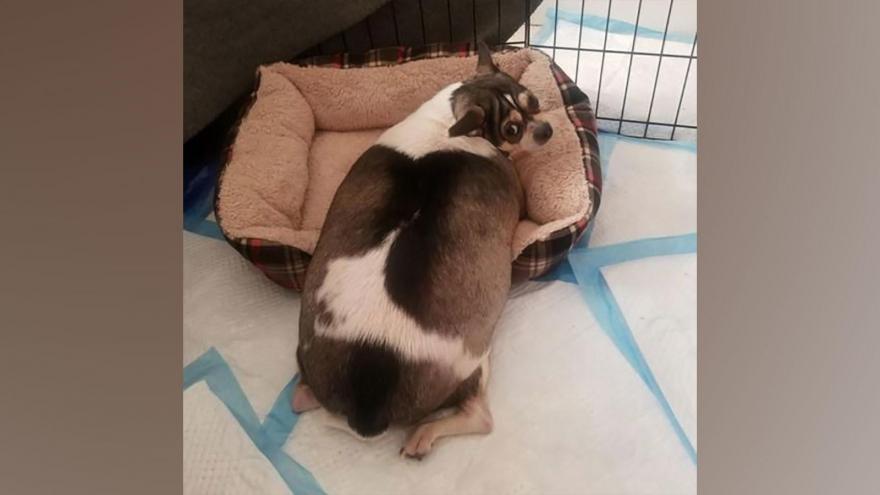 Stanley was found off Route 80 in New Jersey.

(CNN) -- A disabled dog is on the mend after he was found locked inside a crate off the side of a New Jersey highway.

A middle-aged Chihuahua, who has since been named Stanley, was found on the side of Route 80 by animal control on April 29, said Megan Brinster, executive director of Ramapo-Bergen Animal Refuge. Stanley was with animal control for about a week before the animal refuge was able to take him in.

When he was found, Stanley was locked inside a crate and was "frozen in fear," according to a post from the refuge's Facebook page. In addition, the dog weighed 21 pounds, about twice the amount a Chihuahua his size should weigh.

All four of his legs are "bowed in like a pretzel" to the point that it's almost impossible for him to walk, Brinster said. A veterinarian has looked at him and said he doesn't seem to have any health issues besides his weight, she added.

Stanley is now living with a foster mom who has a history of taking care of disabled and elderly animals, Brinster said. At first they were having issues getting him to eat a low-fat diet, but have since started feeding him fresher wet food that he finds more appetizing. He is already starting to lose some weight, she said.

Stanley, who has bonded a lot with his foster mom, is described as very loving and affectionate. While he loves being close to people, he is also liking his own space and adapting to his new life. Once he is healthier, he will be put up for adoption.

"Animals go through such incredible trauma, and yet they are so sweet and resilient," Brinster said.

The shelter is currently raising money to buy Stanley a custom wheelchair and provide him with physical therapy. It's unclear how much has been raised as the shelter just started the campaign, but Brinster said they've gotten lots of calls asking how to help Stanley.