A Denver woman is suing after giving birth in a jail cell. The sheriff's department says it acted by the book 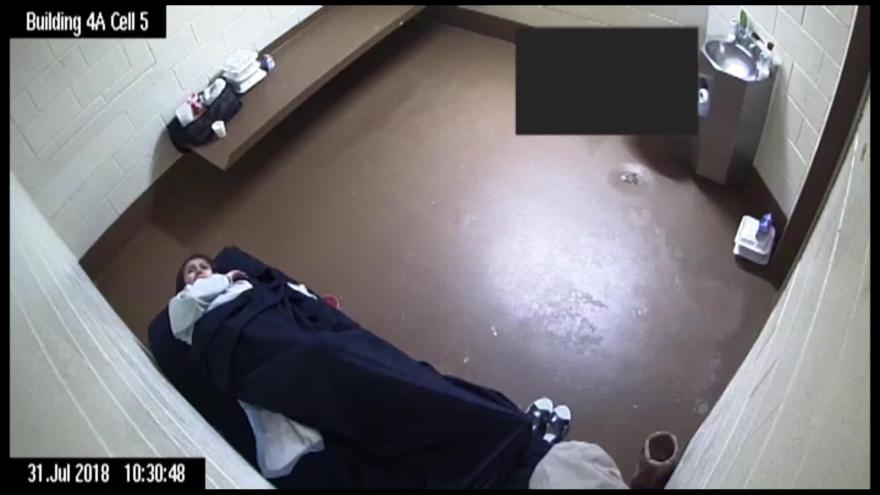 A Denver woman is suing after giving birth in a jail cell. The sheriff's department says it acted by the book.

Almost five hours later, her water broke. But she says she never went to the hospital.

She couldn't. The now-27-year-old was locked up at the Denver County Jail, and she says her pleas for help went unanswered. Almost six hours after she says she first told the guard on duty she was in labor, she delivered a baby boy alone in a jail cell.

Those are the allegations being made in a newly filed civil lawsuit against Denver Health Medical Center, the city and county of Denver and six sheriff's deputies and nurses. The lawsuit, filed in US District Court in Denver, is seeking damages and policy changes. Sanchez's lawyer, Mari Newman, called her client's experience "profoundly disturbing."

"What we're looking for is for Denver and Denver Health to ensure that this never happens to anyone else, and to take accountability for this horrific incident," she told CNN.

The Denver Sheriff Department has denied its deputies did anything wrong, but have changed their policies regarding women in labor as a result.

The ordeal was caught on closed-circuit video recorded inside Sanchez's cell. An edited version of the silent tape that Newman provided to CNN shows Sanchez talking to someone at the door of her cell around 6:30 a.m. By 9:43 a.m. Sanchez is seen knocking on her cell door, apparently trying to get someone's attention.

According to the lawsuit, she told the jail staff that her water had broken and that she had abdominal pain. Childbirth was imminent. About 15 minutes later, someone slid what her lawyer described as a folded white absorbent pad under the door. The video shows Sanchez unfolding it and putting it on the cot in her cell. She pulled her pants down to her knees and laid down on top of it.

Thirty minutes later, the video shows Sanchez clearly in pain, writhing under a navy-blue sheet. Less than 15 minutes later, at 10:43 a.m., Sanchez appears to be screaming in pain and trying to control her breathing.

She's still the only person inside the cell, from what can be seen of the video. Seconds later, she takes her pants off one leg and then her underwear. Finally, a guard appears at the doorway, takes half a step inside and goes back out while Sanchez appears to continue to scream, the video shows. With her weight shifted to one side of her body, Sanchez gives birth to a baby boy, with the guard still standing in the doorway. Then a nurse enters the room, according to the video.

"The nurse that finally does come in looks down at the baby that has been born as if it had just dropped down from outer space. The way he picks up the baby is as if he's never seen a baby before," said Newman, explaining that the appearance of a baby should not have been a surprise.

She says Sanchez told jail staff -- both sheriff's deputies and nurses -- that she was having contractions at least eight times that morning and that an ambulance wasn't called until after the birth. Instead, the lawsuit says that staff ordered a "non-emergent van" to take her to the hospital.

Sanchez herself was not made available for an interview, but last year, weeks after giving birth, she spoke to CNN affiliate KDVR.

"I felt helpless. Nobody was helping me. There were so many people there and nobody lifted a finger basically," she told the station. "That pain was just -- it's indescribable, and what hurts me more, though, is the fact that nobody cared."

According to the lawsuit, Denver Health nurses contracted by the jail as staff members were unprepared even after the baby was born -- unable to find clamps to cut the umbilical cord, the lawsuit says.

"Despite multiple requests, no clamps were found. No nurse at the jail ever clamped or severed the umbilical cord," the suit said.

It was more than 30 minutes after the birth that Sanchez and her newborn baby finally arrived at a hospital, according to the lawsuit.

Sanchez was at the county jail awaiting trial on identity fraud charges, according to her lawyer. She was later sentenced to two years' probation. Newman says Sanchez also struggled with a heroin addiction, and that her client had informed jail officials that she was prescribed methadone to prevent withdrawal symptoms. The attorney said that also made the pregnancy particularly high-risk.

Sanchez was housed in a dedicated medical unit, and "under the care of Denver Health medical professionals at the time she gave birth," Denver Sheriff's Department spokeswoman Daria Serna said in a statement she sent to CNN. "We empathize with anyone who is in jail while pregnant including Ms. Sanchez."

At the time, the incident did prompt an internal investigation, but the probe found that "the Deputy Sheriffs took the appropriate actions under the circumstances and followed the relevant policies and procedures. As a result, [Denver Sheriff's Department] policy was clarified to mandate that when an inmate is in labor an emergency ambulance will be called," read a separate sheriff's department statement that was released last November.

"To make sure nothing like this happens again, the Denver Sheriff Department has changed its policies to ensure that pregnant inmates who are in any stage of labor are now transported immediately to the hospital," the statement said.

That same statement also stressed that the medical staff provided by Denver Health are responsible for inmate care and well-being.

Denver Health spokesman Simon Crittle declined to comment on the incident, citing the litigation, but in a statement said that "Denver Health provides high quality medical care to thousands of inmates every year. Our patients are our number one priority and we make every effort to ensure they receive the proper care."