A delivery driver was killed at a Denny's. Manhunt intensifies as FBI and Virginia police offer $10,000 reward 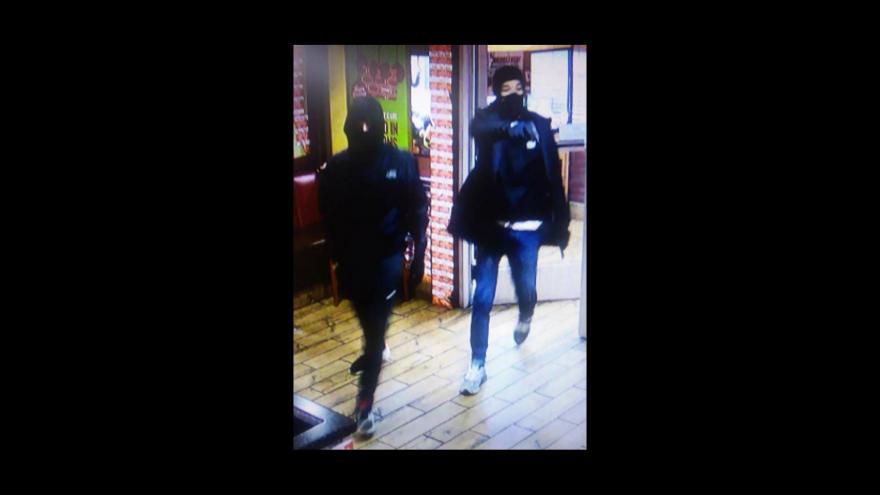 (CNN) -- The FBI and Virginia police are offering $10,000 for information leading to an arrest and conviction in the killing of a food delivery driver.

Two men, described by Prince William County police as in their late teens to early 20s, were robbing a Denny's restaurant early Thursday morning in Manassas, police said in a statement Thursday.

Surveillance footage shows the men running into the restaurant. One suspect brandished a firearm and the other wielded a baton, the FBI posted. Police shared portions of the video with the public to help identify them.

"The men ordered the patrons of the restaurant and employees to the ground while demanding their cell phones and wallets. The men further demanded money from the business," the police statement says.

As the two men, wearing black coats and hats that covered much of their faces, were leaving the restaurant, they shot one man who police say had been sitting on the floor and cooperating. Police note the men took no money or items from the restaurant itself.

Yusuf Ozgur, 56, entered the restaurant to pick up an order as the two suspects were leaving, according to the statement.

Ozgur "was walking into the Denny's and unknowingly held the door for the suspects as they exited," according to police. One suspect struck him with a baton and the other shot him.

Both Ozgur and the first victim were taken to local area hospitals, where Ozgur, a DoorDash delivery driver, was pronounced dead. The wounded man is expected to survive, according to the police statement.

"We are saddened to hear of the incident earlier today at our Manassas, VA restaurant, and our thoughts are with those injured and their families," Denny's said in a statement to CNN.

"We are cooperating fully with the authorities in their investigation. Denny's has shared the surveillance video with all of the relevant authorities as per our policies and will continue to do so throughout the remainder of the investigation."

DoorDash released a statement on Thursday.

"We are deeply saddened by the loss of Yusuf Ozgur, a Manassas-area Dasher. Our thoughts are with his family, friends and loved ones, and we are reaching out to his family to offer our full support during this difficult time," it said. "We are in contact with law enforcement and cooperating with their investigation of this horrific crime."

There may be a link between this heist and three other recent robberies in the area, according to Prince William County Police Chief Barry Barnard.