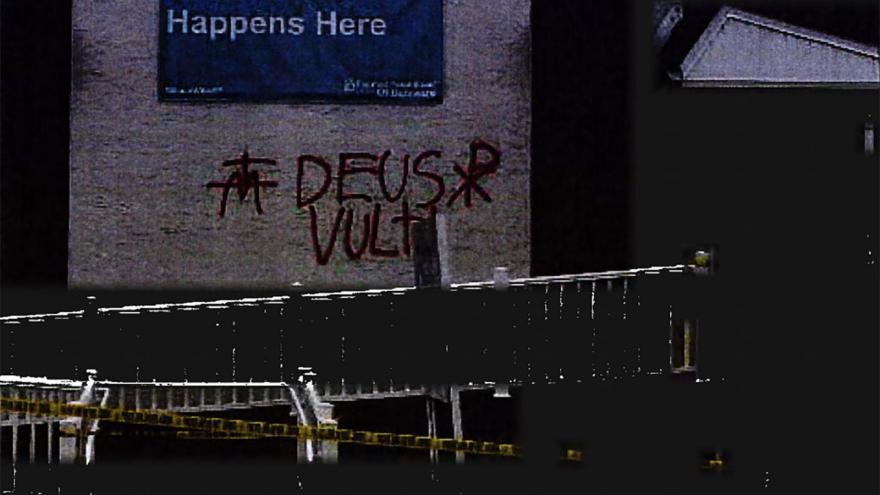 Federal prosecutors say a Delaware resident threw a lit incendiary device at a Planned Parenthood facility and spray-painted the words "Deus Vult," which means "God wills it," in Latin on the building.

(CNN) -- A Delaware man threw a lit incendiary device at a Planned Parenthood facility and spray-painted the Latin words for "God wills it" on the building, federal prosecutors said Monday.

Samuel James Gulick, 18, of Middletown, was charged with intentionally damaging a building that provides reproductive health services and maliciously damaging a building used in interstate commerce through the use of fire or a destructive device, the US Attorney's office in Delaware said.

Gulick was also charged with possession of an unregistered destructive device under the National Firearms Act in connection with the January 3 incident at the Planned Parenthood facility in Newark, Delaware.

"I view this as a an act of domestic terrorism, and an attack on health and reproductive rights and yet another way to limit women's freedom to have body autonomy," Ruth Lytle-Barnaby, CEO and president of Planned Parenthood of Delaware, told CNN. "I think everybody should be able to access healthcare without fear, shame or stigma, and this kind of attack is a way to thwart that."

Video surveillance showed Gulick spray-painting the words "Deus Vult" in red letters on the building and throwing the lit incendiary device at the building's front window, according to the complaint. The object exploded but self-extinguished after about a minute, prosecutors said.

"Deus Vult" is Latin for "God wills it," according to Merriam-Webster.

Authorities identified the car Gulick drove away from the scene.

Law enforcement identified Gulick through his social media posts, including several with the words "Deus Vult" and several anti-abortion posts, according to court documents. The US Attorney's office has not released the video.

Gulick was arrested on Saturday.

He faces up to 20 years in prison and a fine of $250,000 if convicted of the most serious charge of maliciously damaging the Planned Parenthood facility, prosecutors said.

Lytle-Barnaby said what she would like to see happen next is justice, adding that arson "is a new level for us."

"We've been here for 85 years. We've weathered other storms. We will weather tomorrow, and we will not let this or any other acts keep us from providing reproductive healthcare."