A deadly California wildfire was set to cover up a woman's murder, authorities say 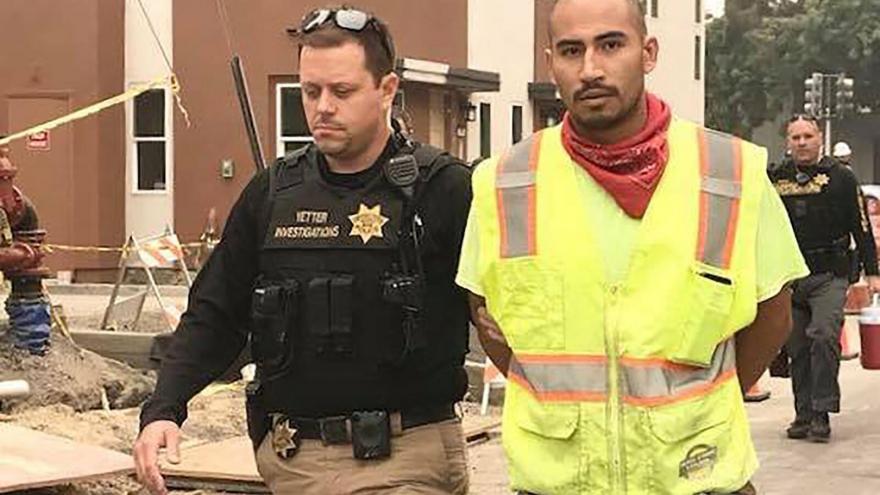 Victor Serriteno, right, was arrested in September on murder charges.

(CNN) -- A 2020 wildfire that killed two people in Northern California and eventually became part of one of the largest fires in the state's history was set intentionally in an attempt to cover up a woman's murder, authorities announced Wednesday.

Douglas Mai, 82 and Leon "James" Bone, 64, died in the Markley Fire, which started on August 18 in the Stebbins-Cold Canyon area, near Lake Berryessa, according to the Solano County Sheriff's Office.

The two men died in their homes, which were several miles away from the lake.

A month later, Vacaville, California, police arrested Victor Serriteno in the murder of 32-year-old Priscilla Castro, whose burned body was found in the same area where the fire started.

"Based on an extensive 8-month long investigation, we believe Serriteno deliberately set the Markley Fire in an attempt to conceal this crime. Earlier this morning, Sheriff's detectives arrested Serriteno for additional charges including murder and arson," said Solano County Sheriff Tom Ferrara at a news conference Wednesday.

Serriteno has been in custody since his initial arrest and online records show he was arrested on the new charges at the Solano County Jail.

Police said that Castro met Serriteno, 29, for a date on August 16 and she was never seen or heard from again. Castro's car was found abandoned two days after her date with Serriteno.

Detectives used cell phone records and other data to narrow down her location and started a grid search on September 2, which led to the discovery of her body.

"You pull anything out of your mind to hope to see her again, that it didn't really happen," Castro's mom, Lisa Phelps Nunez, told CNN affiliate KOVR after the announcement.

She told KOVR that Castro had a 9-year-old daughter and dreamed of owning a hair salon.

CNN is attempting to reach a legal representative for Serriteno.

The Markley Fire later merged with the Hennessey Fire before becoming a part of the LNU Lightning Complex Fire, the fifth-largest fire in California history. It killed six people, charred 363,220 acres and destroyed almost 1,500 structures in Sonoma, Lake, Napa, Yolo and Solano counties, according to Cal Fire.

"We really feel for them because we know the pain, we know how they feel to lose the one you love," Castro's sister, Jasmine Castro told KOVR. "He doesn't deserve to get away with not one bit of this."

Solano County District Attorney Krishna Abrams announced Wednesday that Serriteno is also being charged with two more counts of murder with special circumstances and arson charges, including arson during a state of emergency.

He is scheduled to be in court on Friday afternoon to face the new charges, Abrams said.