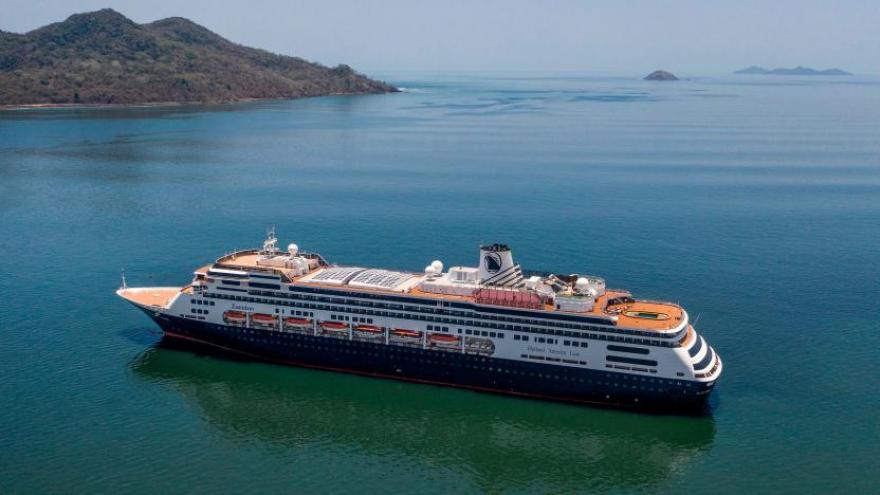 Holland America's cruise ship Zaandam was anchored off Panama for days while waiting for approval to enter the Panama Canal.

(CNN) -- A cruise ship scheduled to arrive in Florida this week has reported at least 189 people are suffering flu-like symptoms on board.

Holland America's Zaandam began transiting the Panama Canal late Sunday night after being docked off the coast of Panama for several days. The boat and its occupants have been in limbo for weeks awaiting permission to disembark after several South American ports denied the ship's entry.

Four people have died aboard the ship, the cruise line announced Friday. At least two people tested positive for coronavirus on the ship on Thursday, according to Holland America.

Zaandam and another Holland America ship, the Rotterdam, are traversing the canal "under extraordinary conditions and for humanitarian reasons," a statement from the Panama Canal said Sunday.

Passengers not experiencing symptoms were transferred from the Zaandam to the Rotterdam Saturday, Holland America said in a statement.

The ship could arrive in Florida Wednesday

Holland America previously announced its intention to travel to Fort Lauderdale, but officials at Port Everglades said Sunday that passengers were not cleared to disembark at that port.

It will take about three days for the ships to reach South Florida once they start transiting the canal, the statement from Port Everglades said.

Holland America must submit a plan prior to arrival that addresses a long list of Unified Command requirements for entry into Port Everglades before being allowed to port, according to the statement.

The ship departed Buenos Aires on March 7 and no one has been off the ship since March 14 in Punta Arenas, Chile.

The Zaandam had booked transit through the Canal for April 1, 2020 since April 2018, according to the canal statement.

A total of 189 people -- 73 guests and 116 crew members -- on board the Zaandam are suffering from flu-like symptoms as of late Sunday night, according to a statement from Holland America.

Some on board the ship say the situation is dire and passengers have been confined to their state rooms for weeks.

Maximilian Jo's parents, Jae, 76, and Julitta, 75, are both on board the Zaandam.

Jo told CNN in an email Sunday that his father was suffering from a fever for hours before being brought Tylenol by the crew. He has been communicating with his parents by email, he said.

The couple, from Long Island, New York, departed on the ship March 7 days before the cruise line announced they would suspend global operations, Jo said.

They had considered not going on the cruise but when they reached out to Holland America they were told a refund would not be given for their scheduled trip, according to Jo.

Another passenger on the ship, Clifford Kolber, told CNN Friday he and his wife have been in isolation on the Zaandam since last Sunday. Both have pre-existing conditions.

He hopes that they will be able to dock and disembark before thing get worse.

"We just want the ports in the country to help us because don't want more people to die," Kolber said.