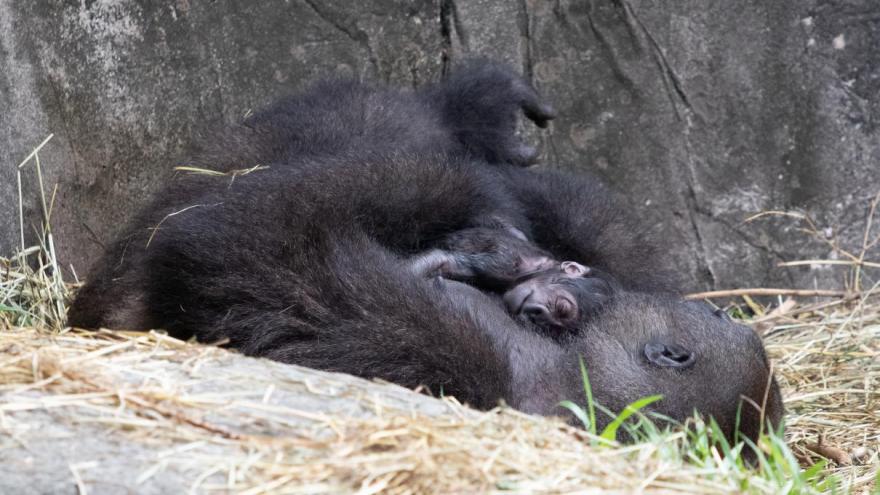 Tumani and her baby.

(CNN) -- Just days after a New Orleans zoo celebrated the first gorilla to be born there in 24 years, the infant has passed away.

The six-day-old baby gorilla born to 13-year-old Tumani at Audubon Zoo died on Thursday. The cause of death is undetermined, but zoo officials plan to perform a necropsy to determine why the baby died.

"Animal care staff noticed on Wednesday evening the gorilla infant seemed lethargic and weak in the arms of the mother," Audubon Zoo said in a statement. "The infant was transferred to the Zoo's animal hospital, but the veterinarian team could not revive the infant. Tumani is currently being monitored by Audubon's veterinary team and the entire troop was given the opportunity to grieve the loss of the infant."

Tumani is one of the Audubon Zoo's critically endangered western lowland gorillas. The zoo's animal care team spent months preparing the expecting mom and the baby's father, Okpara, a 26-year-old silverback gorilla, as well as the rest of the gorilla troop on how to care for the baby.

Tumani and her baby, which hadn't been given a name, "initially appeared to be doing very well," the statement said. The baby was eating and progressing fine, however, there appeared to be a lack of "adequate lactation" from Tumani to support her baby.

"We are heartbroken over the loss," Ron Forman, president of the Audubon Nature Institute, said in a statement. "This has been a work in progress for many years, from the introduction of the new troop members to the announcement of the birth, everyone involved has worked tirelessly. I am incredibly proud of our team. We will continue to contribute to the conservation of this amazing species."

The birth of the baby had become a symbol of hope for the future of western lowland gorillas, which have been assessed by the International Union for Conservation of Nature as critically endangered after experiencing a population decline of more than 80% because of illegal hunting, disease, and habitat loss.

Audubon Zoo, which specializes in gorilla conservation efforts, said that while it isn't unusual for a first-time gorilla mom to lose her baby, the death has caused "a profoundly hard time for the Audubon family."