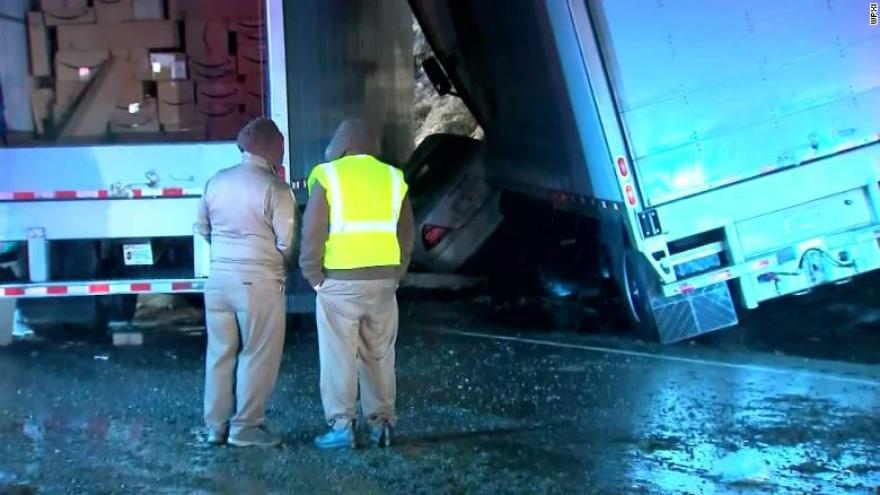 The crash happened around 3:34 a.m. on the Pennsylvania Turnpike in Mount Pleasant Township, southeast of Pittsburgh, the Westmoreland County Department of Public Safety said.

The bus, which was headed from New Jersey to Cincinnati, was traveling on a downhill grade when it failed to negotiate a corner, went up an embankment and rolled over, Pennsylvania State Police spokesman Stephen Limani told reporters.

"When the bus turned over, a lot of them had all their clothing and their personal belongings contaminated by diesel," he said. "They all came in scared. It was dark and cold."

Images of the crash site show the tour bus lying on its side with the damaged tractor-trailers splayed around it and packages spilling onto the ground.

The section of the turnpike where the crash occurred was closed to traffic in both directions for about 12 hours. Around 4 p.m., the eastbound lanes reopened, CNN affiliate WPXI reported.

Around 60 people were taken to hospitals

The five victims were found dead at the scene, county coroner Ken Bacha said. Authorities haven't said what vehicles they were riding in.

"Our drivers will be missed and our thoughts and prayers go out to their families," a UPS spokesperson said in a statement.

Eleven patients, ranging from 15 to 67, were taken to Forbes Hospital in Monroeville, Pennsylvania, hospital spokeswoman Stephanie Waite said. Two patients were in critical condition and nine were in fair condition, Waite said.

Rubino said the tour bus passengers who came to Forbes Hospital were "a mixture of people" speaking Spanish and Japanese.

"There were students. There were adolescents, which really concerned us because there were deaths at the scene. We had some family members. ... They were very interested in supporting each other," he said.

Forbes Hospital brought in social workers and psychologists as well as translators to help the passengers, he said. Passengers were given clean clothes, Rubino said, thanks to a grant the hospital used to purchase clothing for such a situation.

"That kindness and compassion meant so much to them in this state of stress they were in," he said.

The NTSB will investigate

Some of the people at the scene described a change in weather prior to the crash, including precipitation, Limani said.

"We are so early in our investigation it's hard to pinpoint anything specific," Limani said.

Craig Shuey, chief operating officer of the Pennsylvania Turnpike Commission, said that section of the turnpike gets a lot of snow, so crews had been dropping salt and cinder on the roadway since Saturday night.

Pennsylvania Turnpike spokeswoman Renee Colborn said the speed limit is 70 mph in the crash area. The road conditions seemed to be "fine" and the roads are treated 24/7, she said.

FedEx spokeswoman Allie Addoms said the company extended its condolences to the families of those involved in the crash.

"There is no higher priority for FedEx Ground than safety, and we are cooperating fully with investigating authorities at this time," the statement said.

A UPS spokesperson said one of their vehicles was involved in the crash.

"UPS is cooperating with authorities in the investigation and we express our deepest sympathies to the victims and their families and friends," the spokesperson said in a statement.

Pileups have occurred on the turnpike in the past. In February 2014, 100 vehicles were involved in a wreck north of Philadelphia that injured at least 30 people.