Couple wants wedding with 175 guests during pandemic; New York judge will decide if they can 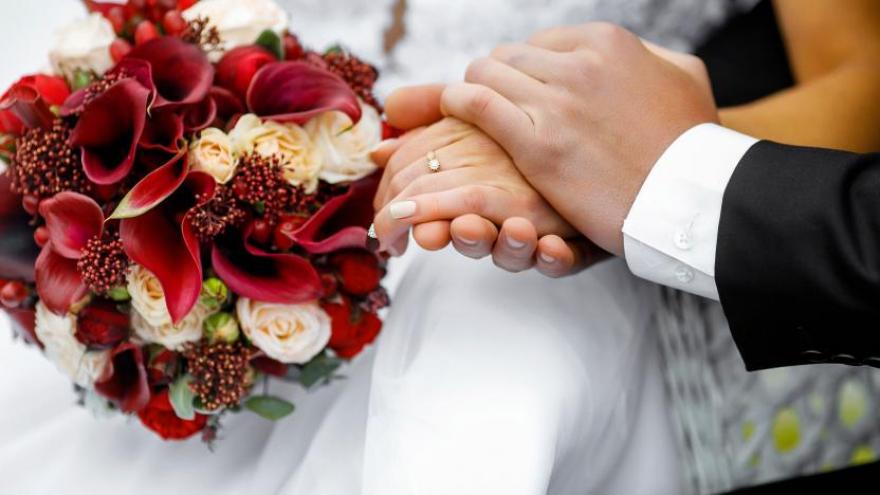 The Covid-19 pandemic is imposing knotty complications on seemingly everything -- including weddings. Take the case of two couples in New York state who sued to hold their weddings at their desired venue with the number of guests they wanted.

(CNN) -- The Covid-19 pandemic is imposing knotty complications on seemingly everything -- including weddings. Take the case of two couples in New York state who sued to hold their weddings at their desired venue with the number of guests they wanted.

While one couple was able to proceed, the August 22 wedding of Pamella Giglia and Joseph Durolek remains up in the air.

They continue to battle state and county officials in court over Gov. Andrew Cuomo's Covid-19 executive order that restricts weddings to 50 individuals or fewer.

But if allowed to take place, the Giglia-Durolek wedding could be a potential "super-spreader" event, warned Dr. Howard Zucker, state health commissioner, in a written declaration.

He cited spikes of Covid-19 cases in other states connected to their premature reopening of bars and restaurants.

"Even if a venue promises to enforce social distancing protocols, and to assure that guests wear masks at all times when not seated at their tables, there are practical limits on a venue's ability to fulfill such promises when hosting a large gathering such as that at issue here, where 175 friends and family will join together from various locations to mingle and celebrate," Zucker wrote.

Zucker's declaration followed a judge's ruling that allowed the couple's co-plaintiffs in the lawsuit -- Jenna DiMartile and Justin Crawford -- to hold their own wedding at the same venue, the Arrowhead Golf Club in Akron, New York. Because their wedding was scheduled earlier, they were able to proceed with their event.

According to the complaint, filed in the Northern District of New York, the plaintiffs said the officials were violating the two couples' constitutional rights by preventing their weddings with more than 50 guests from taking place.

That's because the order treats religious ceremonies differently from gatherings at restaurants and outdoor graduations, along with the racial justice protests following the killing of George Floyd, they argued.

On August 7, Chief US District Judge for the Northern District of New York Glenn Suddaby ruled in favor of the couples on the grounds of their equal protection claim.

The 50-person limit on nonessential gatherings was "impermissibly arbitrary" for the two particular weddings since the venues, The Sterling and The Timberlodge at the Arrowhead Golf Club in Akron, New York, could serve well over 50 people under the 50% capacity rule for restaurants, and because the owners assured they would abide by mask-wearing and social distancing protocols, Suddaby wrote.

There was "no rational basis" for the state to treat weddings differently from restaurants in this case, he said.

"The purpose and the effect of this Decision and Order is to place Plaintiffs' weddings on an equal footing with such restaurant operations, because that is what the Equal Protection Clause guarantees," the judge wrote.

In a statement to CNN, Cuomo press secretary Caitlin Girouard called Suddaby's order "irresponsible at best" and said it would "endanger public health."

One couple's wedding goes through

The ruling came down just 15 minutes before the wedding of co-plaintiffs DiMartile and Crawford was set to start, Tony Rupp, an attorney for the plaintiffs, told CNN.

Though it was too late for the state to try to stop the DiMartile-Crawford wedding, the state is now seeking to halt the second one from taking place on August 22 as it appeals the ruling in the Second Circuit Court of Appeals.

The court "failed to differentiate between social gatherings and ordinary dining" since customers at restaurants do not normally mingle around with other patrons, the state argued in its request for a stay.

However, the plaintiffs argue that the state can't assume they won't abide by the New York's Covid-19 rules for restaurants.

"You can't just label people law breakers just because you think they might not follow the rules. It's discriminatory, really, what they're doing," Rupp continued. "The US doesn't categorize groups of people and say you're likely to be a law breaker. We just don't do that in this country."

For Giglia and Durolek, the pending stay request means their 175-person guest list could be severely trimmed down, or the wedding could be called off all together.

Lucas James and Clinton Holcomb, co-owners of Arrowhead Golf Club, told CNN they had originally received guidance from the state in early July giving the all-clear to hold the weddings under the 50% capacity restriction for restaurants.

The Sterling at Arrowhead, where Giglia and Durolek want to have their wedding, has a maximum occupancy of 438 people. Events like weddings account for roughly a third of the Arrowhead's gross revenue, James said.

James and Holcomb said they were left scratching their heads, however, when they got further guidance from the state the next week stating they could only hold events with fewer than 50 individuals.

According to his written court declaration, James had a conversation on July 1 with Jennifer Delaney, Erie County's director of environmental health, who said they could operate under the state's restaurant rules. Then on July 10, he received an email from Delaney stating that weddings had to be limited to 50 people or fewer.

By that time, the venue had to notify couples of the change in guidance since they already had told them their scheduled weddings could go on as planned, James said.

The Erie County Department of Health told CNN it does not comment on pending litigation. Cuomo's office could not immediately be reached for further comment.

"I had one of my wedding coordinators coming to me in tears crying, saying that she just could not do this anymore," James said. "There's something about that that's just unequivocally unfair."

"Our real goal here was to get clarification for our couples," Holcomb said.

Reply and rebuttal papers on the state's request are set to be delivered this week, with a possible additional hearing before the couple's Saturday wedding.