A couple received a note shaming them for their unpainted house, but now hundreds have donated to help them 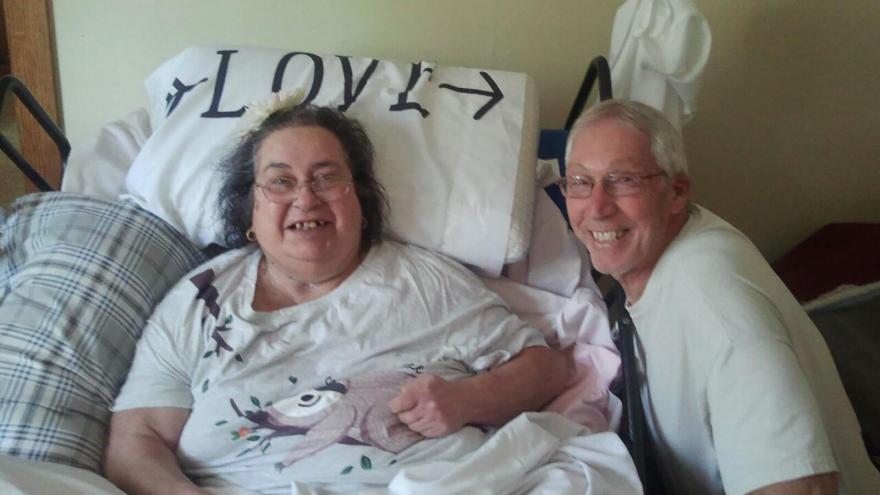 Marilyn and Jimmy Curcuru in their Gloucester home. Marilyn was diagnosed with multiple sclerosis and has been bedridden for about four years, her husband said.

(CNN) -- Jimmy and Marilyn Curcuru have lived together in their house in the Portuguese Hill area of Gloucester, Massachusetts for more than 50 years. They raised their three children there, and previously owned a small business in the community.

But in late July, the couple received an anonymous note, purportedly from a neighbor, in their mailbox. "Please paint me!" the note said, calling their house an "eyesore."

Jimmy, 71, said he was "very upset at first," not because of what the letter said, but that whoever wrote the note "didn't have the nerve to sign it."

He said they knew their house had fallen into disrepair, but various health issues had recently prevented him and his wife from doing large home improvements.

"It was cowardly of them to write a letter like that," Curcuru said.

In 2006, Curcuru had a heart attack and quadruple bypass surgery. His framing business was subsequently closed for months and "never really recovered from that," his daughter, Michelle Curcuru Baran, told CNN. Curcuru also developed kidney issues the next year from medication he was taking following the surgery.

Curcuru's wife, Marilyn, 72, was diagnosed with multiple sclerosis several decades ago and had been using an electric wheelchair, but became bedridden about four years ago. Their oldest daughter, Lynanne, left her job to become her mother's caretaker.

Curcuru had been working part-time at a hardware store until two months ago. His doctor had advised that he stop working there until the Covid-19 pandemic improved, but Curcuru decided two months ago to retire altogether to "stay home more and be with [Marilyn] a little more."

Baran said her father always did the best he could, but health issues have made home repairs both physically and financially difficult for the Curcuru family.

She found out about the anonymous note mailed to her parents, and posted a photo of the note on Facebook.

"To my concerned neighbor, thank you for letting me know my house needs to be painted. Guess what? I know. I've been working on it for almost four years," Baran wrote. "I myself always drive by houses that look like mine and wonder what's up in their lives. I don't judge them not knowing what they may be going through."

Hundreds of people have donated to help them repair their home

Once Baran made her post public, the response and outpouring of support for her family was swift, she said.

The very next day, people were offering to paint the house for her. The mayor of Gloucester even stopped by to ask how she could help. Within the next few days, a neighbor started a GoFundMe page for the family and soon after, local news outlets started reporting the story, Baran said.

"The [Facebook post] was written the day that it happened, so our original thought was anger, especially my sister who lives in the home with them and has sacrificed so much...it's hurt and anger at the beginning," Baran said. "But as the weeks have gone by and you see this outpouring from the community, at this point the person who wrote the note doesn't really matter."

As of Saturday evening, the GoFundMe page had raised nearly $43,000 from over 650 donors from across the globe. The money will fund not only a new paint job, but repairs to the home's leaky roof, and replacements to rotted clapboard siding and some windows that have not been updated since the 1950s, Baran said.

While they still don't know who wrote them the note calling their home an "eyesore," the Curcurus, who recently celebrated their 51st wedding anniversary in June, say they are thankful for everyone who has come out in support of their family.

"It's very emotional for me to talk about it. For everybody who put money in, who sent us checks, we're going to send a thank you note to every one of them. There are no words for me to say...to thank them properly for what they're doing," Jimmy Curcuru said.