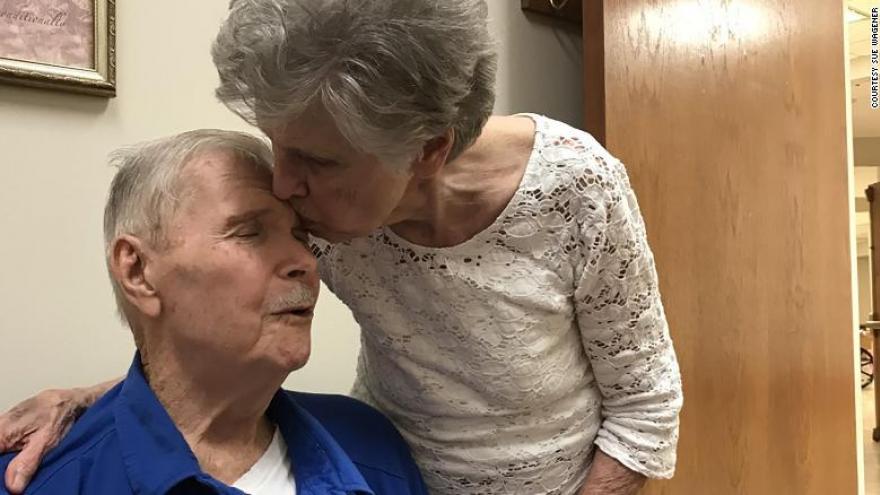 Jack and Harriet Morrison have been together since 1955. The passed away on the same day hours apart.

(CNN) -- A couple that was married for 65 years died just hours apart after spending some time together one last time.

Jack and Harriet Morrison both died earlier this month at a nursing home in St. Louis, Missouri. They spent their final hours together thanks to the nursing staff at The Woodlands of Arnold.

"This is what movies are made of," their niece, Sue Wagener, told CNN. "They were truly in love."

Scour the headlines and you'll find many cases where when one half of a long-married couple dies, the second death follows. Doctors often call it broken heart syndrome. But even if the cases aren't rare, they're no less heartbreaking.

Jack met Harriet in 1955 and never looked back. He was 21 years old, and was following in his father's footsteps at the family business, V-K Bus Lines.

He met Harriet, then 18, when he was driving one of the company's buses.

"They were always holding hands," Wagener said of the couple. "You never see them without them touching one another or his arm around her."

As the business grew, Jack eventually sold it to retire in his early 50's. When he became a licensed pilot, the two traveled around the world.

Harriet was admitted to the nursing home about a year and a half ago. She tripped over the dog and was hurt.

Jack suffered an injury not long after that, and he joined her there.

In the last few months, she developed dementia, so there were days when she remembered him and other days when she didn't, Wagener said.

"Those nurses were wonderful to them," the niece said. "When she had a good day, they would put them together. They'd eat breakfast or have coffee and they would just sit there and hold hands."

Their separate rooms were just four doors down from one another at the nursing home, and in their final hours, the staff moved them together.

"I love, I miss them," Wagener said of the couple. "I know that they're happy together, again."