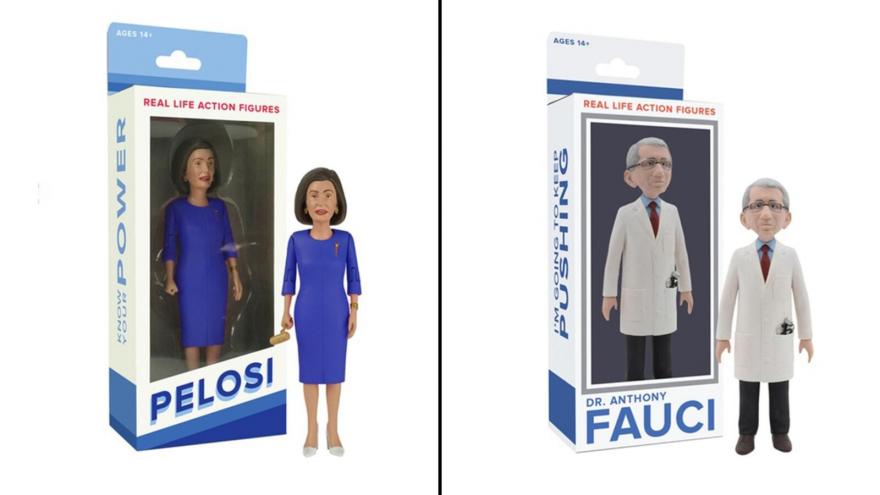 FCTRY, a Brooklyn-based company, raised over $200,000 on Kickstarter to help them produce the action figures.

(CNN) -- House Speaker Nancy Pelosi and Dr. Anthony Fauci, director of the National Institute of Allergy and Infectious Diseases, are getting the action figure treatment.

FCTRY, a Brooklyn-based product design company, said it raised over $200,000 on a Kickstarter page -- surpassing its initial $15,000 goal -- to help them produce the toys.

"These are imperfect times but still they could be worse," the company wrote on its Kickstarter page. "Imagine a parallel universe where everything else is exactly the same, except there is no Nancy Pelosi to act as a check on power. Kind of terrifying, right? Pelosi has basically been leading the Resistance these last few years...We should probably thank her."

Dr. Fauci's figurine is dressed in a white coat and removable mask. The action figure sports the doctor's signature glasses, and has his stethoscope ready to go in his front pocket.

Because of his work as a key member of the White House's coronavirus task force, Fauci has garnered a large fan base -- and businesses across the country have plastered the doctor on everything from cupcakes to socks.

FCTRY said it decided to create a Fauci figure after raising "a good deal more than we need to produce the first run of Pelosi action figures."

The action figures -- which will cost $20 each -- are designed by Mike Leavitt, a Seattle-based artist who has spent the last 20 years mastering the craft of sculpted caricature, according to the company.

"Heroes give us a sense of hope and direction, which is especially necessary during tough and confusing times," FCTRY wrote on the fundraising page. "Collectively, we've got huge challenges to face right now and there are no superheroes swooping in to save the day - just ordinary people who are willing and able to confront extraordinary problems."