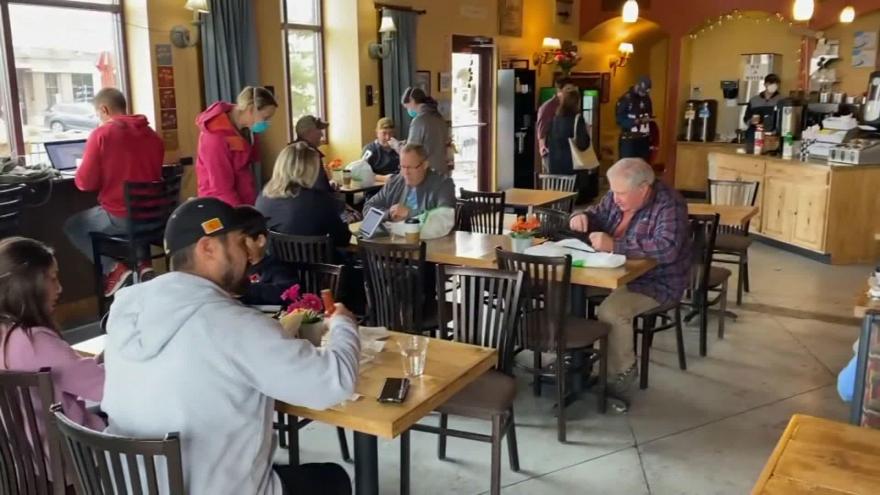 Video shows many people, mostly without masks, crowded into a Colorado restaurant on Mothers Day.

(CNN) -- A restaurant in Colorado was forced to shut down Monday after reopening on Mother's Day with no social distancing protocols in place.

Video shot and posted on social media by Nick Puckett for Colorado Community Media showed large crowds of people in C&C Breakfast and Korean Kitchen in Castle Rock, about 25 miles south of Denver. Most patrons were not wearing masks, the video showed, and there was no social distancing in place.

In the video, nearly every table is occupied, large groups of people are huddled waiting for their orders and a line of patrons are wrapped around the block.

Governor and health department both 'disappointed'

Tri-County Health Department closed the restaurant Monday due to the violations.

"We are disappointed that C&C Breakfast & Korean Kitchen, a Cookies and Crema Company in Castle Rock, has decided to ignore the Governor's Safer at Home order and open up yesterday with no attention to social distancing," a spokesperson for the Tri-County Health Department wrote in an email to CNN Monday.

Governor Jared Polis said he was disappointed by what he saw on the video during a Monday press conference.

"I was so disappointed that anybody would be so irresponsible and put their own business at risk of closure, with the indefinite closure for hazardous health conditions, that would jeopardize their patrons, probably even friends or loved ones of the employees and the owners," Polis said.

"The most effective way to limit the suffering of our fellow Coloradans and ourselves and to get our economy back on track sooner rather than later ... is we need to obey the public health orders that save lives and reduce the duration of this economic disruption."

Owners wanted to make a statement

April Arellano, who owns the restaurant with her husband Jesse, told CNN affiliate KCNC they knew there would be consequences but they "were willing to make a statement."

Prior to their reopening the restaurant tweeted Saturday, "We are standing for America, small businesses, the Constitution and against the overreach of our governor in Colorado!!" CNN has reached out to the owner of C&C for comment.

Safer at Home order in place

Although Colorado lifted the Stay at Home order for most of the population last week, the state is currently under a level 2 Safer at Home Order. That means that residents aren't required to stay home but are encouraged to. Non-essential businesses have reopened but are required to enforce social distancing practices such as maintaining six feet of distance between people and only allowing 10 patrons into a business at a time.

Under the new order, facial coverings are encouraged but not required.

The health department says they were forced to shut down the restaurant for in-house dining but will continue to stay in touch with the business.

"We will follow up with this restaurant to ensure that they, like other restaurants in the county, take appropriate steps to protect the public health, by limiting service to curbside and take-out service," a spokesperson for the Tri-County Health Department said.