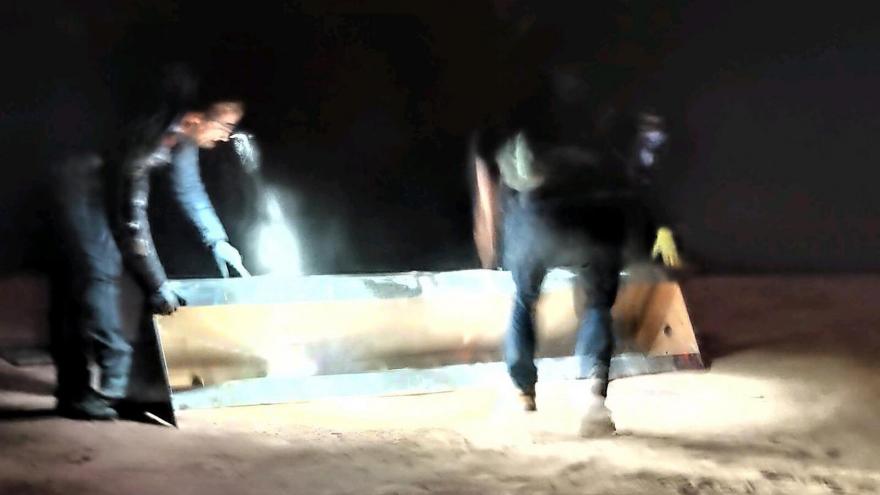 A group of four was captured removing Utah monolith.

(CNN) -- The mysterious monolith discovered last week in a Utah desert just disappeared -- but it wasn't taken by aliens or government conspiracies. It was moved by another phenomenon: TikTokers.

Bernards, who has about a decade of experience in hiking and navigating deserts, set out to capture photos of the world-famous monolith with a group of friends last Friday after determining its location earlier in the week.

After he and his friends had reached the location of the monolith and had been taking photos for over an hour, they heard the voices of a new group rounding the corner toward the location. Bernards assumed the group of four was there to take photos as well, but that was not the case.

"They immediately started really pushing on it, like throwing their whole-body weight into it," said Bernards. "It took them maybe three big pushes to get that thing to pop up a little bit and start turning on its side."

As soon as they were able pry the entire monolith loose, it fell straight on the ground and made a loud bang. It sounded as if someone threw their largest stew pot off a ladder as hard as they could, Bernards said.

"Once that happened, one of them said this is why you don't leave trash in the desert," said Bernards.

The group of four took the big pieces of the monolith and placed them in a wheelbarrow and said "leave no trace" as they rolled it away, said Bernards.

According to Bernards, the phrase "Leave No Trace," is a known principle in the outdoor community that encourages people who visit the outdoors to protect the environment by minimizing their impact.

Bernards and his friends did not stop the group from removing the monolith because they agreed that it needed to be removed because the area is not set up for the type of attention it was receiving and could cause damage that would negatively impact the land, he said.

"It was a cool thing to see, but it also just needed to go," said Bernards. "The wilderness areas -- Mother Nature is the artist up there and we need to leave the art to her."

One of the individuals who helped remove the monolith announced in a post on social media Tuesday that he and a team were responsible for removing the monolith on the night of November 27 at around 8:30 p.m.

Sylvan Christensen, who has almost 30 thousand followers on TikTok, posted a video of the monolith strapped to a wheelbarrow and carried away with the faces of the individuals removing the structure blurred. The post has since been viewed almost 200 thousand times on TikTok.

"Don't abandon your personal property on public land if you don't want it to be taken out," Christensen wrote in a caption along with a hashtag #LeaveNoTrace.

Christensen identifies himself as a guide for Moab Adventure Tours, according to his social media.

"We removed the Utah Monolith because there are clear precedents for how we share and standardize the use of our public lands, natural wildlife, native plants, fresh water sources, and human impacts upon them," the group said in an emailed statement to CNN. "The mystery was the infatuation, and we want to use this time to unite people behind the real issues here -- we are losing our public lands -- things like this don't help."