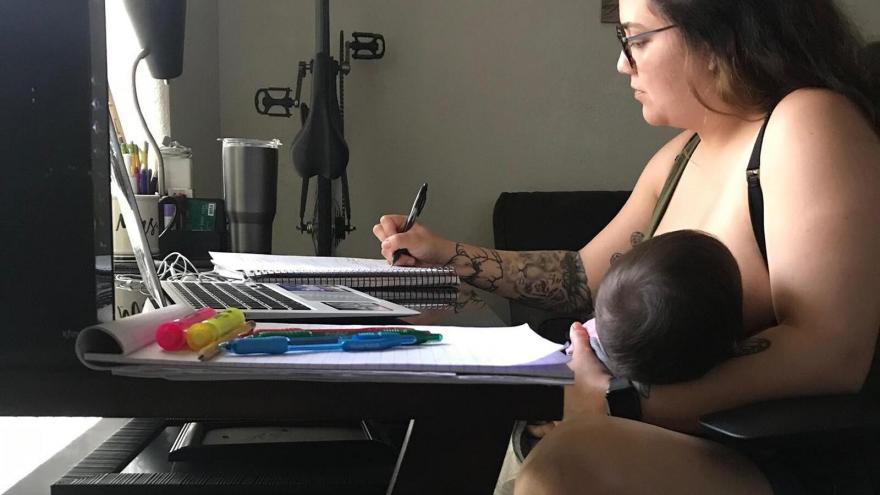 Marcella Mares, a college student, says her professor told her not to breastfeed her 10-month-old daughter during online class.

(CNN) -- A California college student says she was told by her professor she could not breastfeed her baby during an online class, prompting an apology from the instructor after she raised concerns to the school.

Marcella Mares, mother to a 10-month-old girl, received an email from her Fresno City College instructor on September 23 about a new class rule requiring students to turn on cameras and microphones during online classes for attendance purposes.

Mares wrote back and said she could leave her camera and microphone on but may turn it off when she needs to breastfeed her daughter.

With the pandemic in the US entering its seventh month, many parents have had to redefine their work-life balance as many workplaces and schools remain virtual. Mares sent the email to her instructor in hopes that it wouldn't impact her grade, but instead received an unexpected response.

"I am glad to hear that you can have your camera and microphone on, but please do not breastfeed your daughter during class time because it is not what you should be doing," the instructor replied. "Just do that after class."

Mares said she was shocked at his response.

"I was upset about it," she said. "I didn't like the feeling of him telling me what I can and can't do with my baby, especially in my own home because school is online right now."

On the same day, Mares said, the instructor announced during class that he received a "weird" email from a student who wanted to do some "inappropriate" things during class.

This made her even more upset because she said she felt "he publicly outed me in front of the class."

She reached out to the school's Title IX coordinator, Lorraine Smith, regarding the incident and a few days later, the instructor emailed Mares an apology.

"I am sorry for the inconvenience in regard to your intention of breastfeeding your baby. From now on, you have the right to breastfeed your baby at any given time during class, which includes doing group worksheet, listening to the lecture, and taking the quiz or exam. You may turn off your camera at any given time as needed," he said in an email to Mares on September 26.

Mares eventually dropped the class for reasons unrelated to the incident, but said she expected the school to take further action regarding the incident.

Fresno City College Public Information Officer Kathy Bonilla confirmed to CNN that the school received a complaint from a student who was told not to breastfeed during her online class.

"Dean Lorraine Smith communicated with her, confirming her rights according to California law and we worked with the instructor to make sure that her rights weren't being violated," Bonilla said. "The instructor also reached out to her to correct his directive."

According to Bonilla, "the instructor was not aware of the law pertaining to breastfeeding and now understands that his directive was not correct."

"California law requires that schools accommodate students for conditions related to pregnancy and childbirth including lactation," Bonilla explained. "The accommodation includes providing the time away from class to breastfeed without academic penalty."

Mares told CNN that she has not had any issues with breastfeeding in any of her other classes during her first semester as a mom. Other instructors have been supportive of her, she said.