A cold front is pushing away smoke from wildfires that blanketed the East Coast. But it could return again soon 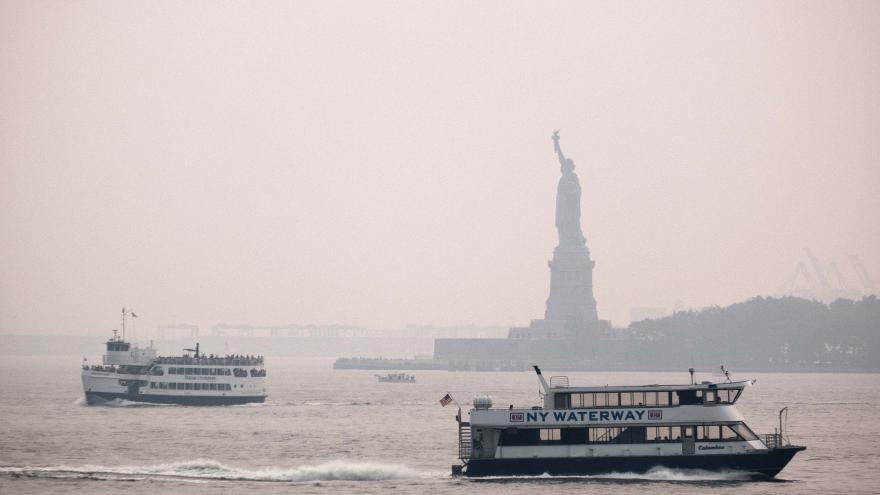 (CNN) -- After a day of poor air quality stretching as far as the East Coast, some people may soon get to breathe a little easier with the help of a new cold front pushing out the smoke created by wildfires in Canada and on the West Coast -- but not for long.

By Thursday night, smoke from wildfires could possibly return, and another front will push through the region on Saturday into Sunday to help clean it out again, according to CNN meteorologist Michael Guy.

This will be the pattern until the jetstream changes direction and/or the fires have diminished, he said.

With 78 large fires burning across 13 states, more than 20,000 wildland firefighters are battling blazes across the country. The fires have collectively scorched at least 1.35 million acres as of Thursday, according to the National Interagency Fire Center (NIFC).

And in Canada, a state of emergency was declared for British Columbia, where 3,180 firefighters are working on 300 fires across the province, officials said.

The intensity of the fires was so strong that high-level winds had carried their smoke to the East Coast, where New York City recorded its worst air quality day in over a decade.

In the West, where extreme drought hasn't let up for months, the fires have destroyed structures, led to power outages and compelled Oregon officials to deploy the National Guard to fight the nation's largest wildfire -- the Bootleg Fire -- that has been burning for nearly 10 days.

In California, where the NIFC says eight active fires have already burned nearly 200,000 acres, additional evacuations were issued Wednesday around the Dixie Fire in Butte County.

"Firefighters fought the fire aggressively from the ground and the air. ... The fire is burning in a remote area with limited access and steep terrain," according to a statement from InciWeb, the US clearinghouse for wildfire information.

Bootleg Fire remains the largest in the US

The Bootleg Fire in southern Oregon swelled by 6% from Tuesday, bringing it to 395,463 acres with a containment of 38%, the fire's Public Information Officer Sarah Gracey told CNN.

And although the fire expanded, Gracey said the small increase seems like progress.

"The fire has only grown 2,000 acres in the past two days, this is a small amount which is significant," she said. "We are turning a corner on this fire, we feel."

She added the "good, safe, and aggressive firefighting on the ground" has been key, but officials are conscious that the fight isn't over yet.

"We do have critical fire weather conditions through the weekend, but we are not anticipating additional Red Flag Warnings. So, while our weather is slightly better for the rest of the week, we do still have critically dry fuels which means the potential for large fire growth remains very high."

It is now the third-largest fire in Oregon since 1900, Marcus Kauffman, spokesperson for Oregon Department of Forestry told CNN's Poppy Harlow Thursday.

"It's kind of a dubious honor," Kauffman said. "But it's not all bad news. In the last couple of days, the fire has only grown 1,000 acres per day, and for a fire of this size, basically that's a really strong signal that fire behavior is moderating."

Record-breaking, triple-digit temperatures and severe drought have devastated parts of Oregon. Those conditions have been fueling the fire and forcing evacuations.

Campfires will be banned in all state parks and state-managed forests east of Interstate 5 starting Thursday, the Oregon Parks and Recreation Department said Wednesday. That covers all regions of the state except the Pacific coast and a portion of the Willamette Valley.

The ban includes not only charcoal and propane fires, but also tiki torches and even candles.

Oregon Gov. Kate Brown has pointed to climate change as the culprit behind the fires, ice storms, record-breaking high temperatures and drought emergencies hitting her state.

"There's absolutely no question that climate change is playing out for before our eyes," Brown said at a news conference Tuesday. "We saw the heat dome event a few weeks ago; we unfortunately lost a lot of Oregonians through that event. In February, we saw devastating ice storms, over a half a million people lost power last fall, as you are well aware. We've had unprecedented wildfires."

Fire potential is being driven by drought conditions, with 90% of Oregon in either exceptional, extreme or severe drought, Doug Grafe, chief of fire protection at the Oregon Department of Forestry, said while predicting a "long, difficult fire season."

He said it's possible that another 50,000 to 100,000 acres could burn before the Bootleg Fire is contained.

"The future for us for the remainder of the season continues to look above normal dry and above normal temperatures," Grafe said. "So this is not going to return to normal anytime soon."

Elsewhere, Montana currently has 17 wildfires -- the most in the country -- that have charred more than 100,000 acres, and Idaho is seeing 16 active wildfires that burned 175,000 acres, according to NIFC.

Following Oregon, the states with the most acres burned are California, Idaho and then Alaska.

The Dixie Fire in California's Butte County has scorched more than 90,000 acres since it began last week and remained contained at 15% Wednesday. Evacuations have been ordered in the area, and the fire already destroyed two structures and threatens more than 800 others.

On Tuesday, Pacific Gas and Electric said the fire may have been sparked by equipment it manages.

In a preliminary filing with the California Public Utilities Commission, PG&E detailed an outage alert July 13, the same day the fire started. A responding utility worker found three blown fuses and a tree leaning into a pole, with a small fire on the ground near the base of the tree.

Butte County is the site of California's deadliest and most destructive wildfire in 2018, the Camp Fire. It destroyed 18,804 structures and killed 85 people.