A Coca-Cola semi-truck crashed into a Pennsylvania home 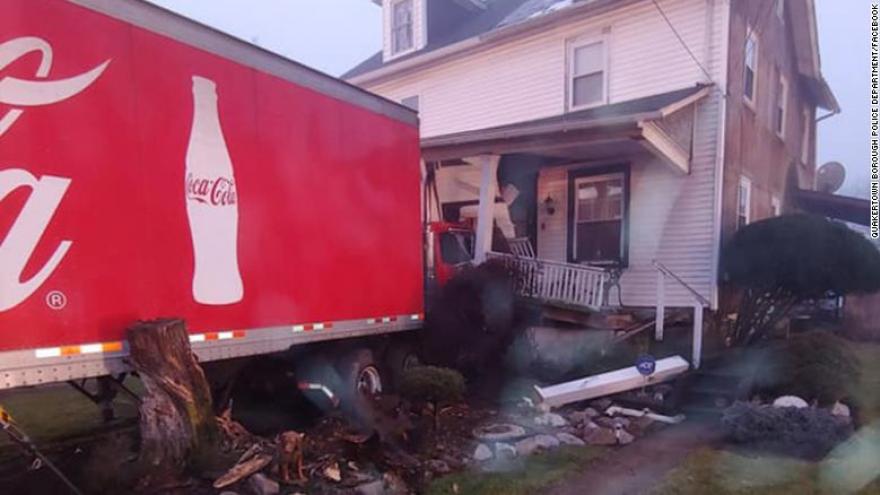 Maryland police are looking for a person they say deliberately lured a group of birds and ran over them.

(CNN) -- A Coca-Cola tractor-trailer crashed into a Pennsylvania house on Saturday, destroying the front of the home and causing road closures.

The accident happened around 6:30 a.m. Saturday in foggy conditions in Quakertown, Pennsylvania.

The truck was driving on East Broad Street when it approached an intersection that required it to turn. But instead of turning, the truck continued straight over a curb and a large landscaping boulder before going airborne into the twin house, Quakertown police Sgt. Bryan Lockwood told CNN.

Liberty Coca-Cola Beverages, the local Coca-Cola bottler that owns the vehicle, said in a statement the thick fog in the area that morning may have "diminished the visibility of the intersection where the incident occurred."

"The safety and security for our employees, customers and surrounding residents is our number one priority. Thankfully, there were no injuries and we are deeply sorry to the family at the home that this unfortunate accident happened," according to the statement sent by spokesman Brian Dries. "We are conducting an internal review with our driver and vehicle."

Though no one was seriously injured, the truck driver had a few minor injuries. He managed to get out of the truck through a window, Lockwood said. Liberty Beverages said the driver is a 23-year veteran of the company and was taken to a local hospital as a precaution.

The front of the home was significantly damaged, and the truck is totaled, Lockwood said.

Police initially told residents to stay clear of the area, but after six hours, authorities were able to remove the truck from the home and reopen the road, Lockwood said.