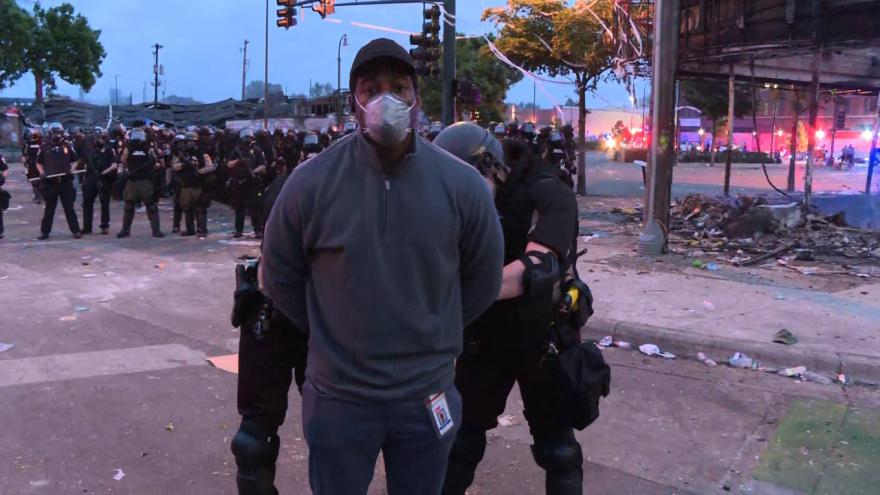 CNN correspondent Omar Jimenez was handcuffed while reporting on Minneapolis protests live on the air Friday.

(CNN) -- A CNN crew was arrested while giving a live television report Friday morning in Minneapolis -- and then released about an hour later -- as the crew covered ongoing protests over the death in police custody of George Floyd.

CNN correspondent Omar Jimenez told Wolf Blitzer his mother and grandmother were watching when he was arrested with his producer and his photojournalist shortly after 5 a.m. CT.

"As you can imagine, they both were watching on air as this was happening and so in the time I did not have my phone and was being transported to the public safety building downtown, my mom, as I found out later, was calling every single person on the planet basically trying to figure out where I was going," Jimenez said, adding that since he had not been booked there was no record of where he was.

This worried his mother and grandmother even more.

When Jimenez was finally released about an hour later, CNN Worldwide President Jeff Zucker told him after he got out that "he made the most important call of my life for me."

"I assumed it was to the governor, and he said 'No, that most important call of your life was to your mother,'" Jimenez said. "He called my mother to tell her and let her know that I was OK."

Jimenez said his grandmother told him that she was arrested during the civil rights movement as a protester.

"She looked at me, almost saying it as a badge of honor, for sticking up for and standing your ground," he said. "I'm thankful to say we were able to do that by doing our constitutionally protected job. At the end of the day there were a lot of scary moments, even more so for my friends and families and loved ones watching what was happening."

Jimenez could be seen holding his CNN badge while reporting, identifying himself as a reporter, and telling the officers the crew would move wherever officers needed them to. An officer gripped his arm as Jimenez talked, then put him in handcuffs.

"We were just getting out of your way when you were advancing through the intersection," Jimenez continued.

Police told the crew they were being detained because they were told to move and didn't, one member of the CNN crew relayed to the network.

Minnesota Gov. Tim Walz told Zucker that he deeply apologizes for what happened and would work to have the crew released.

Later, after the crew was freed, Walz told reporters: "We have got to ensure that there is a safe spot for journalism to tell the story."

The troopers were clearing the area at Walz's direction, he said, adding there was "absolutely no reason" for the journalists' arrests and that he takes full responsibility.

Stelter: Arresting reporters at a protest is an affront to the First Amendment

Jimenez, Kirkos and Mendez were taken to the city's downtown public safety building after their arrest, but were released after 6 a.m. CT.

Jimenez, after his release, reported live outside from downtown and said he'd been treated cordially after he'd been led away.

"We're doing OK, now. There were a few uneasy moments there," Jimenez said.

The Minneapolis State Patrol said this about the incident:

"In the course of clearing the streets and restoring order at Lake Street and Snelling Avenue, four people were arrested by State Patrol troopers, including three members of a CNN crew. The three were released once they were confirmed to be members of the media."

CNN disputed the state patrol's characterization in a statement on Twitter.

"This is not accurate -- our CNN crew identified themselves, on live television, immediately as journalists. We thank Minnesota @GovTimWalz for his swift action this morning to aid in the release of our crew."

Another CNN reporter says he was 'treated much differently'

CNN's Josh Campbell, who was in the area but not standing with the on-air crew, said he, too, was approached by police, but was allowed to remain.

"I identified myself ... they said, 'OK, you're permitted to be in the area,'" recounted Campbell, who is white. "I was treated much differently than (Jimenez) was."

Jimenez is black and Latino. Kirkos is white, and Mendez is Hispanic.

"A CNN reporter and his production team were arrested this morning in Minneapolis for doing their jobs, despite identifying themselves -- a clear violation of their First Amendment rights. The authorities in Minnesota, including the Governor, must release the three CNN employees immediately," CNN said in a statement shortly after their arrest.

Charles Ramsey, a former Philadelphia police commissioner and a CNN law enforcement analyst, said the arrest made no sense.

"State police are going to have a lot to answer for this arrest here," Ramsey said. "(Jimenez is) standing there ... you can see his credential. Just move him where you want to be."

"They should have a designated (media) area, and just tell them to move to that area."

"We saw a reporter who is educated, who is brown, who is doing his job better than anybody ... (who) was in harm's way, letting the American people see what's going on, on the ground. He complied. He said he would move. ... You almost have to laugh not to just be furious."

What happened before the arrest

Hours before the CNN crew's arrest, crowds charged over a fence and threw firecrackers at the Third Precinct building overnight. Minneapolis police officers deserted the building, which eventually was set ablaze.

More fires burned, including at a four-story building that had contained restaurants and an event space down the street from the precinct.

Police appeared to have abandoned the area for hours. Crowds had thinned, though some people still were throwing things into the burning four-story building, Jimenez reported around 4:30 a.m. CT.

Intermittently, an officer told people over a loudspeaker to "disperse immediately" or face arrest.

By the time Jimenez was reporting live shortly after 5 a.m. CT, troopers were advancing down the street where Jimenez was standing.

The troopers soon approached the three-person crew while moving in to arrest a fourth person behind them.

After the crew was detained, Mendez's camera was set on the ground and continued to transmit live images.

Journalists assert First Amendment rights to press freedom when covering protests in public spaces, and infringements are relatively rare in the United States.

Numerous journalists were detained while covering the 2014 protests in Ferguson, Missouri. At the time, The American Society of News Editors called it a "top-down effort to restrict" First Amendment rights.

The arrests wound up being embarrassing for the police, and four of the journalists sued St. Louis County. In a settlement deal in 2016, the county agreed "to adopt policy changes that will address the issues raised by this lawsuit."

Since then, researchers at the US Press Freedom Tracker have counted a handful of other cases of journalists taken into custody while covering protests.