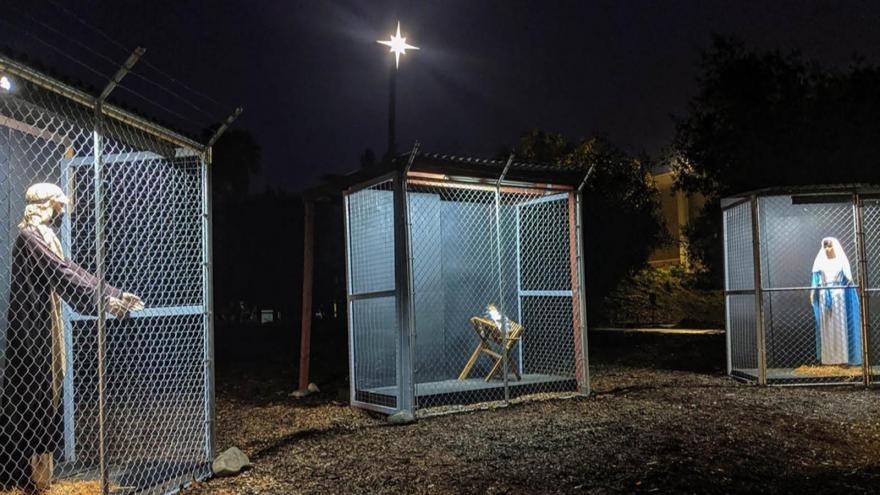 A California church is displaying a nativity scene depicting Jesus, Mary and Joseph as refugees in cages to draw attention to the conditions faced by migrants seeking asylum in the United States. CREDIT: Pastor Karen Clark Ristine/Claremont UMO/Facebook

(CNN) -- A California church is displaying a nativity scene depicting Jesus, Mary and Joseph as refugees in cages to draw attention to the conditions faced by migrants seeking asylum in the United States.

The Claremont United Methodist Church, about 30 miles east of Los Angeles, posted the photo on its website showing the three held in separate cages topped with barbed wire. The baby Jesus is wrapped in a silver foil blanket.

Lead Pastor Karen Clark Ristine spoke with CNN affiliate KABC about the scene outside of the church. "We thought about the most famous refugee family in the world, the family of Jesus," Ristine said.

In a Facebook post, Ristine said the display came from the idea of "What if this family sought refuge in our country today?"

The biblical story of Mary and Joseph fleeing from Israel to Egypt to escape King Herod's decree that all baby boys be killed is symbolic of the plight of thousands of refugees seeking asylum in America, she said.

"In the Claremont United Methodist Church nativity scene this Christmas, the Holy Family takes the place of the thousands of nameless families separated at our borders," Ristine said in the post. "Imagine Joseph and Mary separated at the border and Jesus no older than two taken from his mother and placed behind the fences of a Border Patrol detention center as more than 5,500 children have been the past three years."

"If this sparks conversation, that would be one good goal," Ristine told KABC.

It certainly has sparked conversation.

"It is disrespectful in my view to put the King of Kings, Lord of Lords in a cage at any time. Your political views should not be mixed with the birth of our savior. Shame on you!" wrote one user.

Another thought the scene was a very powerful display.

"Does the world's most famous and worshipped refugees separated in cages make you uncomfortable USA? ...it does?... Good!"