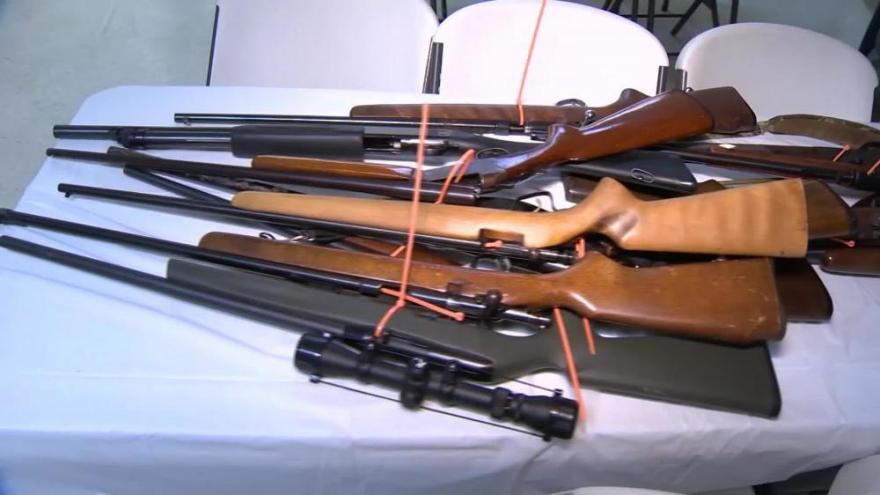 Almost 150 guns were turned in as part of a church's gun buyback on MLK Day. The Church of the Holy Cross ran the program in honor of Rev. Martin Luther King Jr.'s legacy of nonviolence.

(CNN) -- A church in Pittsburgh is overwhelmed after hosting a gun buyback program that ran out of money within an hour.

"In the first 45 minutes, we actually ran out of money," the Holy Cross church senior warden Sylvia Wilson told CNN. "Some people were just bringing the guns in and they didn't want the money. They just wanted to get the guns out of their homes."

The church posted a sign on its door when it ran out of money, according to CNN affiliate WTAE.

"The gun buyback response has been overwhelming. Thank you," the sign read. "We have run out of cash for this buyback. Sorry to turn so many away. You can still turn in guns though."

Even after the money was gone, people were still streaming in the doors to drop off their firearms, Wilson said. Others came to the church with money to give toward the gun buyback.

The church was expecting about 100 guns, but the number they received exceeded that, she added.

At least 146 firearms were surrendered, as of Monday afternoon, according to Rich Creehan, director of external relations for the Episcopal Diocese of Pittsburgh. The gun breakdown included 104 handguns and 42 rifles. Two of those were AR-15s.

Parishioners and community members also donated another $1,000 toward the gun buyback, Creehan said.

Honoring Martin Luther King Jr. and his belief in nonviolence were why the church decided to host the gun buyback on MLK Day.

"It's very overwhelming but it actually is quite apropos for us because we were doing this to honor Dr. King, who we consider the apostle of nonviolence," Wilson said.

"We didn't realize that in Virginia they would be marching today," she said, referencing a gun rights rally in Richmond on Monday. "We see that as dishonoring his legacy because they're marching on this holiday representing him. It's the total opposite of what we're trying to do today."

The church was the site of a double homicide recently and keeping its community safe was another reason to get guns off the streets, she said.

"We had a double homicide outside our church about two months ago," Wilson said. "It's time for this violence to stop. It's time for people to stop having a disregard for human life. We want people to live their lives fully without having to fear some unexpected gun violence, which happens all too frequently in many communities."

The church hopes it can do more gun buybacks in the future.

"We've gotten more assault weapons off the street in less than 40 minutes than we would have imagined," Church of the Holy Cross Rev. Torrey Johnson told WTAE. "And we want to continue to get the efforts going if we can, but we can't right now because we don't have the money."