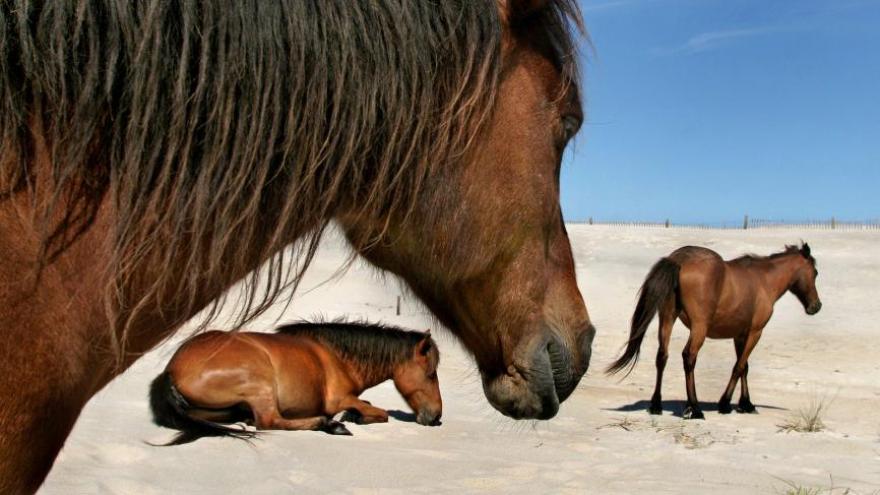 Research that included DNA sequencing on archaeological remains from Puerto Real, an early Spanish town located in modern-day Haiti, has provided clues to the origin of the wild horses of Assateague.

(CNN) -- The unexpected discovery of a 16th-century horse tooth in modern-day Haiti has provided credence for an age-old folk story about the origin of feral horses on an island off Maryland and Virginia.

The famous wild Chincoteague ponies have lived for centuries on Assateague Island, a barrier island on the Atlantic coast. But no one is quite sure how they got there. A 1947 children's book inspired by local legend, "Misty of Chincoteague," suggests that the ponies are the descendants of Spanish horses who swam to the island after a Spanish ship wrecked off the coast of Virginia, reverting to a feral state over the years.

But research published in PLoS ONE by scientists from the Florida Museum of Natural History on July 22 provides new scientific support for the theory based on the discovery of the oldest known DNA from a domesticated horse in the Americas.

Nicolas Delsol, a postdoctoral researcher at the Florida Museum of Natural History, was researching cow bones from 16th-century archaeological sites in an effort to understand the introduction of domesticated cows to the Americas during Spanish colonization. He conducted DNA sequencing on a "huge collection of archaeological remains" from Puerto Real, an early Spanish town located in modern-day Haiti. The town was established by the Spanish in 1507 but abandoned in 1578.

"One of the bones that I thought was from a cow was misidentified," Delsol explained in an interview with CNN. "A small fragment of tooth was actually (from) a horse."

The discovery was "completely unexpected," said Delsol. "We quickly realized it was maybe the first domestic horse genome that we had from the early colonies of America."

The genetic analysis "confirms what we could expect from the historical documents, saying that the first horses were boarded on boats from the Iberian peninsula from southern Spain, most likely," said Delsol. Horses were a crucial part of Spanish society, he said -- so important that Spanish colonizers brought them on the grueling and logistically challenging journey across the Atlantic Ocean.

But the genetic analysis of the 16th-century tooth also helped Delsol identify the closest living relative of the early domestic horses: the Chincoteague ponies. The genetic similarity lends credence to the belief that the ponies are descendants of early Spanish horses, says Delsol.

"It might show some veracity behind this legend, that it is rooted in an actual event," he said.

However, just because the feral ponies are likely descended from Spanish horses doesn't mean they came from a shipwreck, the researcher noted.

"The Spanish could have left them on the island like they did with some other species, like pigs or cattle, left them to breed to have some local stock," he explained.

"It shows something that is not widely known but is partially studied, that the Spanish were not only present in the Caribbean region, and in Mexico and in South America, but also exploring their options much farther north on the east coast of the US in the mid-Atlantic region," said Delsol. "We have some evidence of Spanish presence, Spanish expeditions inland in the Carolinas."

Going forward, Delsol and his team hope to expand their research on the Puerto Real specimens -- and explore how early colonizers depended on horses for cattle ranching in the Americas.