A cave full of ancient Indigenous paintings sold for more than $2 million. The Osage Nation says it belongs to them 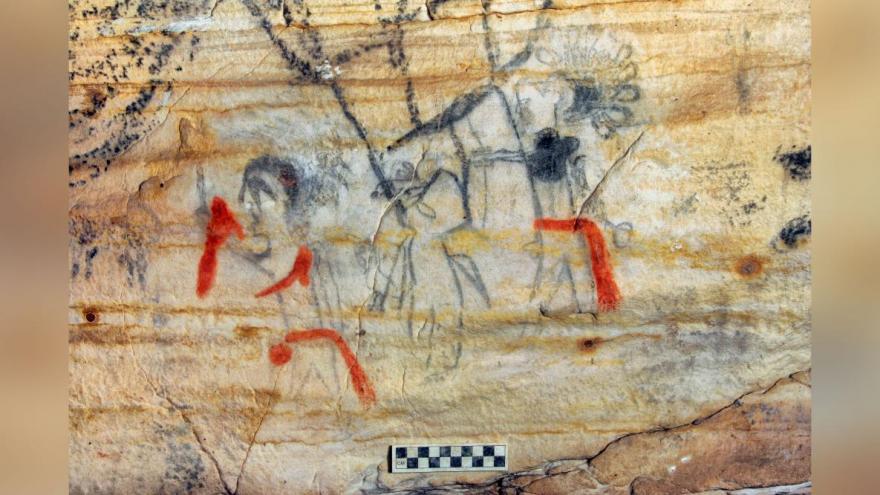 A Missouri cave containing artwork created by the Osage Nation about a thousand years ago was sold at auction earlier this week.

(CNN) -- More than 1,000 years ago, Indigenous people journeyed into a dark cave on the land now called Missouri and painted nearly 300 detailed images on its walls.

The cave was a sacred space, where tribes performed ceremonies, made sense of the universe and buried their dead. A millennium later, the paintings contained within it continue to offer clues about how those civilizations lived and what they believed.

On Tuesday, Picture Cave -- as it's commonly known -- sold at auction for $2.2 million. And for the Osage Nation, whose ancestors created much of the artwork in the cave, the sale came as a huge blow.

"It is our ancestors who are buried there in that cave," Andrea Hunter, tribal historic preservation officer for the Osage Nation, told CNN. "It is our ancestors that created the images that are on the walls and conducted the rituals that took place. It is absolutely the most sacred site that we have. And it rightfully should be in our ownership."

For decades, a private family owned the site

Since 1953, Picture Cave and the 43 acres of land on which it sits had been owned by a St. Louis family who used it mainly for hunting. But in recent years, the family began to discuss the possibility of selling the site, according to Bryan Laughlin, executive director of Selkirk Auctioneers & Appraisers, the company that managed the auction.

Once the Osage Nation learned their sacred site might soon be up for sale, the tribe knew they wanted to reclaim it, Hunter said.

Over a period of several months, the Osage Nation, in conjunction with the Conservation Fund and the US Fish and Wildlife Service, discussed an arrangement with the family that would have allowed the tribe to purchase the site directly. Ultimately, however, the parties were unable to agree on a price, Hunter added.

During this time, the family had the site valued by real estate appraisers, whose estimates ranged from $420,000 to $450,000, Laughlin said. Unhappy with that valuation, the family presented their situation to the auction house, which estimated the site would sell for anywhere between $1 million and $3 million at auction.

"To me, it was just mindboggling how they wouldn't be able to realize that the significance and the historical intrinsic value would make it so much greater than just the acreage times a certain number," he added.

Earlier this year, it was announced that Picture Cave would be coming up for auction. For some, however, the notion of putting a price on a site with such historical and cultural significance to Indigenous people was alarming.

Carol Diaz-Granados, an anthropologist who along with her husband James Duncan spent more than two decades researching the cave and wrote a book on its mysteries, called the sale "both wrong and unethical."

"It really sends the wrong message -- that ancient sacred American Indian sites can be purchased for the 'right' amount of money, irregardless of their patrimony," she wrote in an email to CNN.

The new buyer hasn't been identified

Though Hunter said the Osage Nation, represented by the Conservation Fund, were among the bidders on Picture Cave, an anonymous buyer ended up winning out on the sale earlier this week -- much to the heartbreak of the tribe.

"It's hard to put into words," Hunter said, of her feelings after the sale.

In recent years, tribes in the US have reclaimed ancestral lands through various methods: Some have raised funds to buy back the lands themselves, while others have had their lands repatriated by previous owners. It's unclear, though, whether the Osage Nation will eventually be able to reclaim Picture Cave.

The new buyer has not been publicly identified, but Laughlin described the entity as cave conservationists who have worked to preserve other caves in the Midwest and around North America. He said he's optimistic that the site will continue to be taken care of, both because the auction house had limited who could bid and because a Missouri law makes it a crime to damage a human burial site or profit off of cultural items from there.

"Regarding time and unforeseen occurrence, I cannot say, but all indications thus far would be that the cave is going to be preserved very well," Laughlin added.

As for now, the Osage Nation is attempting to connect with the buyer to ensure that the tribe's sacred site remains preserved and protected, according to Hunter. But the point remains, she said: Picture Cave was theirs to begin with, and to them it should have been returned.

"That's good that they have an interest in preserving it," she added. "But why should it be some cave conservationist in control?"