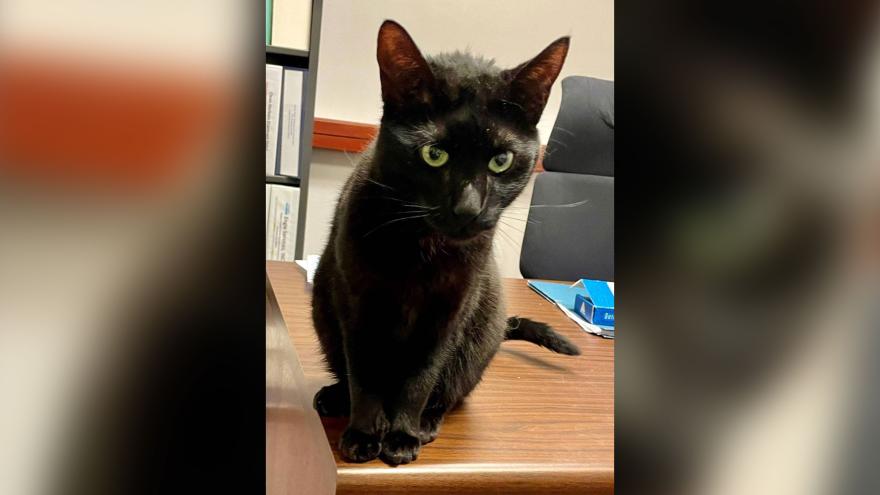 (CNN) -- A pet cat who has spent a harrowing three weeks on the loose in Boston Logan International Airport was finally found and is set to be reunited with her family.

The cat, fittingly named "Rowdy," escaped her kennel after the arrival of her Lufthansa flight from Germany on June 24, according to a press release from the airport.

Rowdy roamed the airport for a total of 20 days before finally being captured with a trap set by staff on Wednesday, says the airport.

"Whether out of fatigue or hunger we'll never know, but this morning she finally let herself be caught," said the airport in the release. "Searching for Rowdy became a community effort, with everyone from construction workers to airline staff constantly on the lookout hoping for a positive outcome."

The airport handed Rowdy over to Boston's Animal Rescue League, and she is expected to be reunited with her family on Saturday at around 10 a.m., says the airport.

Patty Sahli, Rowdy's owner, told CNN that the frisky feline has always had an "energetic" personality. "She'd fly everywhere," she said. She adopted the kitten four years ago for her daughter, who is currently attending college in Pennsylvania.

The mishap occurred amid a transatlantic relocation. After 16 years living in Germany, Sahli and her husband made the decision to move back to the United States to be closer to family. In May, Sahli flew to Florida with the couple's other cat, an 8-year old rescue named Iggy. Then, in June, her husband followed with Rowdy, who was placed in the plane's cargo hold.

When Sahli arrived at Boston Logan International Airport to meet her husband and the cat, she received a call from him with bad news. "When they unloaded the cargo section, the door of her carrier fell out and she ran out chasing a bird," said Sahli. "Three people tried to chase her but they were not successful."

A three-week rescue operation ensued, with Sahli contacting local animal shelters and animal welfare organizations for help. Sahli said that officials at Massport, which operates the airport, told her they thought Rowdy was likely in an underground part of the airport where conveyor belts move cargo. So airport staff set up cages in the hopes of catching the elusive cat, complete with Rowdy's favorite "Temptations" treats and shirts from Sahli and her husband to attract Rowdy using their familiar scent.

Finally, Rowdy was caught with a trap set in an area where several workers had reported sightings of the cat.

"We're so glad it's a happy ending," said Sahli. "I couldn't think about what if we never found her, or she got hurt."

Staff at the Animal Rescue League shared videos of Rowdy post-capture with Sahli, who said she "looks cool as a cucumber in that rescue center."

Sahli expressed her gratitude for the Animal Rescue League, Massport, the construction workers, Lufthansa, and everyone else who helped locate Rowdy.

"Everybody took a personal interest and everybody was so happy when it happened," she said.