A cat shot through the head with an arrow is recovering after surgery. His rescuers named him Cupid 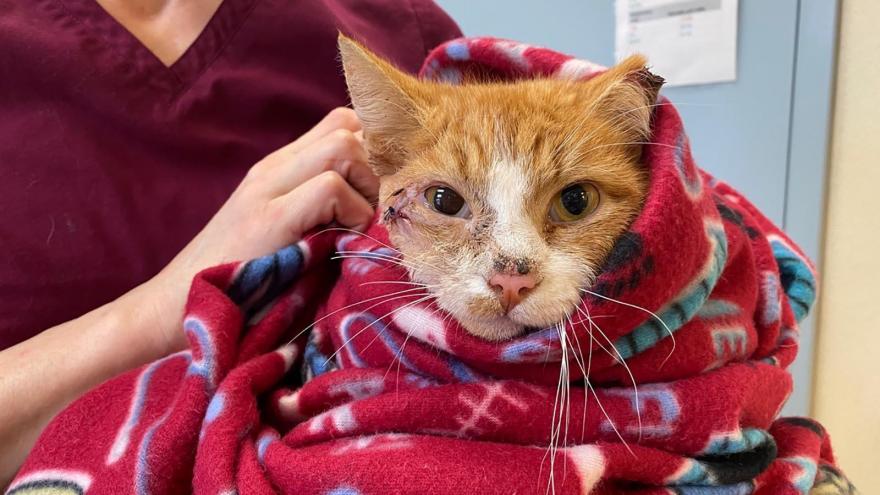 Cupid the cat is recovering from surgery after he was found with an arrow through the head on February 14.

(CNN) -- An orange tabby cat got a new lease on life and a name to go with it after veterinarians removed an arrow that someone had shot through his head.

Cupid, as the cat is now named, is on the road to recovery after a surgery at the Animal Welfare League of Arlington in Virginia last weekend.

"We believe the arrow may have been there for up to a week," spokeswoman Chelsea Jones told CNN. She said the arrow had gone through the cat's head and lodged in his shoulder.

Rescuers rushed Cupid to a local animal hospital on February 14 after a woman in Hardy County, West Virginia, found him on her porch. Veterinarians there were able to give him pain medication but weren't able to perform the surgery.

They called on the team at Arlington to help.

The center's veterinarians picked up Cupid on Saturday and transported him to an animal emergency room for additional pain medication and x-rays.

He had surgery on Sunday, and that's when he got his name.

"We named him Cupid partly because he was found on Valentine's Day and also because of how incredibly sweet and affectionate he was -- despite being in such pain and discomfort," Jones said.

Surprisingly, veterinarians discovered the arrow had not penetrated any major organs or arteries when in surgery. It did cause a serious infection.

The entire process took about two hours to remove the arrow, clean the infection, insert drains, sew up the wound and neuter him.

And despite the pain, Cupid remained in great spirits. But he still has a long road ahead.

"He is doing well today but our next hurdle is fighting off the severe infection he has from the arrow wound," Jones said.

"But he's a fighter and doing great so far," she said. "He has a great appetite and adores people. All he wants to do is eat and snuggle."

The total bill for his hospital visit and surgery will be about $6,500. The animal welfare league is accepting donations to help foot the bill. They set up a part of their website just for it titled: "For Cupid, with love."

Correction: This story was updated to correct the Animal Welfare League's location.