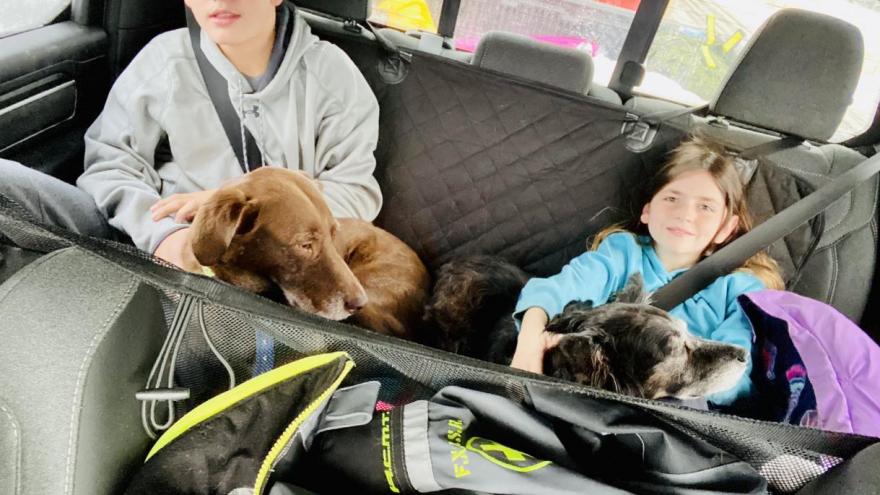 Payton and Rebecca Marchessault, holding their dogs during their road trip from Georgia to Alaska.

(CNN) -- There's nice, and then there's Canadian-nice, which sometimes involves driving a total stranger, her two kids, a pair of elderly dogs and a cat named "Midnight" more than a thousand miles through a snowstorm to another country.

It all started because Lynn Marchessault, her 13-year-old son Payton, 10-year-old daughter Rebecca and the family pets needed to get from Georgia to Alaska. Marchessault's husband, a staff sergeant in the US Army, is stationed at Fort Wainwright in Fairbanks.

So Marchessault packed up all their belongings, bought a 4x4 truck that could handle Alaska winters, rented a U-Haul, and made plans for a cross-country family adventure during the balmy days of early fall.

Marchessault waited months for the travel documents that would allow her to drive from Georgia, through Canada and up to Alaska. Due to the coronavirus, Canada had instituted strict guidelines for Americans traveling through the country, en route to Alaska.

By the time she got things in order, her September road trip was pushed to November. Besides the restrictions placed on her by the Canadian government, she knew she'd have to keep up a good driving pace to avoid the worst of winter weather.

O'er the roads we go

The first 3,000 miles of the trip went well. The weather was good, the kids were glued to electronic devices, the dogs behaved and the cat slept.

They entered Canada through the province of Saskatchewan. Border authorities checked Marchessault's paperwork and warned her to keep to the main roads and stop only when necessary for food or gas.

The family would have to order any food to-go, even at motels they stayed in along the way. She was allotted five days to drive through Canada and get to the US border in Alaska.

White-knuckling it all the way

The farther north they traveled, the worse the weather got. Marchessault, who was raised in the South, encountered her first winter white-out conditions. Then she ran out of windshield wiping fluid. Slush covered her windows and she couldn't see to drive. Even scarier -- her tires seemed to be losing traction.

"So I pull up to the gas station," she said. "My kids had to go to the restroom, they put their masks on, so I was out at the vehicle ... I'm a complete wreck -- I was crying at this point -- and a woman came out of the gas station. She says 'Are you okay?'"

"At this point, I just needed to vent to somebody, and it all just started to come out. I explained how I was having trouble getting up the road, and I wasn't getting any traction, and she said: 'Let's check your tires.' I was under the impression I had all-weather tires, that's what the dealership told me, but she checked and she said: 'Honey, these are summer tires.' "

Frozen windshields and a shredded tire

That good Samaritan drove Marchessault to a tire store, where they were able to change them on the spot.

But Marchessault was done with driving.

"I told my husband: Border patrol can just come and get us where we are. That's the only way we're leaving Canada at this point."

The Marchessaults found a motel and went to bed. That's when the kind folks in and around Wonowon, British Columbia, got to work, putting out a plea on Facebook for someone to drive the Marchessaults, their truck and their U-Haul the last 1,056 miles to the border. The trip takes a good driver, familiar with the perilous Alaska Highway, about two days.

Marchessault's husband wasn't thrilled about the idea of a stranger driving his family that far, but he wasn't legally able to enter Canada during the pandemic to go get them himself.

And if the Marchessault family didn't get to the border soon, they would go past the five-day maximum they were given to get to Alaska.

Gary Bath, a ranger whose job includes training members of the Canadian military to survive the Arctic, was at home when he saw his friend's post about the stranded American family.

"After watching the post for a bit I saw no one was able (to help), so I talked to my wife and we made the decision that I would drive her the whole way to the border," Bath said.

Both families met over the internet, and when they decided they were all comfortable with the plan, Bath and his wife drove to meet the family at the motel.

While Marchessault admits making the trip so late in the year turned out to be an error in judgment, allowing Bath to drive them wasn't.

"I'm a very good judge of character, I knew that I made the right choice, and these were good people," Marchessault said.

With Bath behind the wheel, Marchessault was able to relax and reflect on what she'd been through when she'd try to drive under the same conditions.

"I'm sure my son was happy he didn't have to comfort me anymore as I cried ... it was more of a 'dry heave' cry," she explained, while laughing.

"You can't cry with actual tears because then you can't see the road -- and I was just gripping the steering wheel with white knuckles."

And home to Alaska tonight!

Bath found the long drive uneventful (except for a blown tire that was fixed quickly) and the company enjoyable.

"We both have military experience so we talked about military life, told stories of family, the kids played games, and Lynn and I found out we are both weird and like the MRE's -- the military food," Bath said.

He drove them to a Canadian border checkpoint where the Marchessaults handed in their paperwork and the new friends parted ways.

"We just clicked from the get-go," Marchessaults said said of Bath. "Just like old friends. it was a really nice drive. He deserves all the credit. He's a good guy."