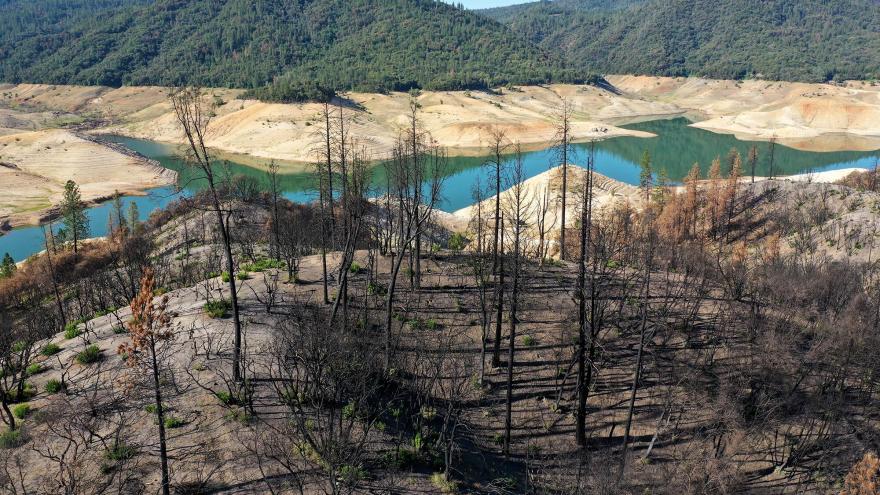 An unrelenting drought and record heat have pushed the water supply at Northern California's Lake Oroville to deplete to "alarming levels," which will likely force the first-ever closure of the Edward Hyatt Power Plant since it opened in 1967, California Department of Water Resources spokesperson Lindsay Buckley told CNN.

(CNN) -- Water in a key California reservoir is expected to fall so low this summer that its hydroelectric power plant will be forced to shut down for the first time, officials said Thursday, straining the state's already-taxed electric grid.

An unrelenting drought and record heat, both worsened by the changing climate, have pushed the water supply at Northern California's Lake Oroville to deplete rapidly. As a result of the "alarming levels," officials will likely be forced to close the Edward Hyatt Power Plant for the first time since it opened in 1967, California Energy Commission spokesperson Lindsay Buckley told CNN.

The water in Lake Oroville — the state's second largest reservoir — is pumped through underground facilities to generate electricity, which can power up to 800,000 homes when operating at full capacity.

While the water level in the reservoir is currently hovering around 700 feet above sea level, if it continues to fall at the currently projected rate to 640 feet there will not be enough water to continue operating the Hyatt plant in two to three months, coinciding with the typical peak of the summer heat and wildfire season.

"If lake levels fall below those elevations later this summer, DWR will, for the first time, cease generation at the Hyatt power plant due to lack of sufficient water to turn the plant's electrical generation turbines," said Liza Whitmore, Public Information Officer of DWR's Oroville Field Division.

"Amid a major heat wave that is stressing energy grids in states across the western United States, Governor Gavin Newsom today signed an emergency proclamation to free up additional energy capacity," Newsom's office said in a press release.

The governor's declaration, citing "extreme peril" to the safety residents due to the heat wave, suspends permitting requirements to allow the immediate use of back-up power generators to help alleviate stress on the state's energy grid.

California energy grid officials have called on residents to reduce power through Friday, especially during the evenings when electricity use is at its peak. Scaling back on using power during this peak time of the day will help avoid unneeded rolling power outages and damaged power lines, state officials previously said.

As of 2018, hydro-power plants generated around 13% of the state's electricity. Hyatt power plant is the fourth largest hydroelectric energy producer statewide, according to the state's energy commission. Due to the already low water supply at Lake Oroville, the plant's output has been reduced to 20% of its total capacity and officials have relied on other facilities to avoid major power interruptions to homes and businesses, Whitmore said.

A similar situation was playing out at the Hoover Dam, which forms Lake Mead, the United States' largest reservoir and produces enough electricity for nearly 8 million Americans, where record-low water levels have reduced energy capacity by roughly 25 percent.

A hydroelectric plant downstream of the Hyatt facility in California will also operate at reduced levels this summer despite increased power demands during the typical summer peak, Whitmore said.

In addition to encouraging power-saving measures, officials statewide are urging Californians to reduce their water consumption as much as possible during the hot summer months ahead. They recommend curtailing water use by taking shorter showers, fixing leaks at home, planting drought-tolerant trees, and reduce watering home landscapes. Some officials in Northern California have already taken a stricter approach by declaring a water shortage emergency and issuing mandatory water restrictions that are punishable by fines for noncompliance.

"Water is a precious and limited resource, especially in drought-prone California where the next dry period could be right around the corner," the state's water resources department said. "As a result, water conservation and the efficient use of California's water supply are major priorities."

Correction: A previous version of this story misidentified Lindsay Buckley's title. She is a spokesperson for California Energy Commission.