A California animal sanctuary sent two planes to Iowa to rescue 1,000 chickens that were going to be euthanized 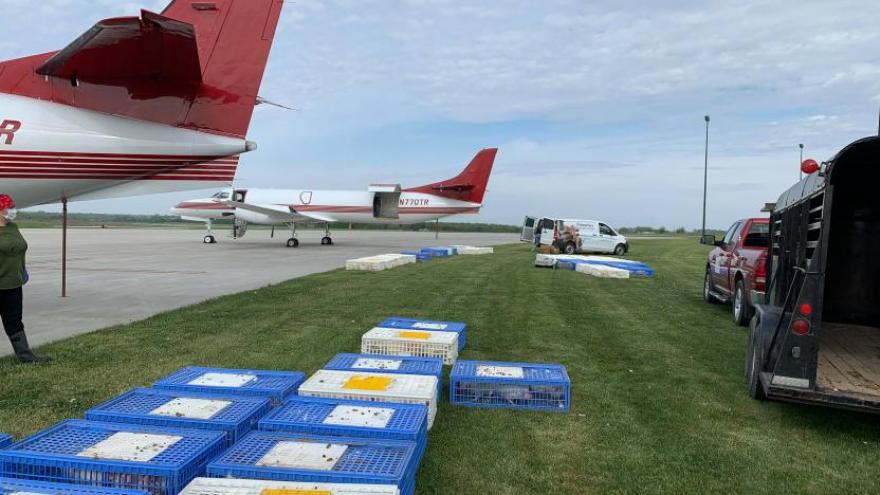 The rescued animals about to be loaded on planes.

(CNN) -- A California animal sanctuary said it rescued 1,000 hens that were going to be euthanized from a struggling Iowa egg farm this weekend.

The farm, which the rescue did not name, had to scale down due to the pandemic disrupting supply chains, according to a press release from Animal Place, an animal advocacy group.

The egg farm decided to scale down operations and planned to euthanize more than 100,000 hens with carbon dioxide gas. The Iowa farm agreed to allow Animal Place, a large animal sanctuary in northern California, to rescue 1,000 of those hens.

The pandemic has severely impacted the food supply chain -- meatpacking plants have closed and farmers have been unable to sell their products. Last month, two million chickens on several farms in Delaware and Maryland were euthanized due to a lack of employees at chicken processing plants, according to a statement from Delmarva Poultry Industry Inc.

Animal Place chartered two private planes -- that was paid for by a donor -- to Iowa on Saturday to transport the animals to their new home in California. Two of the animal sanctuary's staff members also made the nearly 30-hour drive to the farm to oversee the rescue.

"With funds running low, the farm had not been feeding the hens well for a week prior to rescue," according to the sanctuary's press release. "The farm employs a battery cage system with cages stacked four to five high, and 10 hens per cage."

During the rescue, other local animal advocates assisted Animal Place to remove the birds from the wire cages and placing them into plastic crates for transportation. The group noted that they found dead hens inside the barn and in cages with surviving hens.

The hens were then loaded up on the planes in Fort Dodge, Iowa, and flown to Truckee, California. The flight was eight hours long, including a stop to refuel.

"The entire process, from the 27-hour drive, arriving at the farm at 3 a.m., loading and unloading full crates from the planes and vehicles, and going straight to caring for them once we arrived at the sanctuary was the most exhausting experience I've ever had," Hannah Beins, Animal Place animal care director, said in a statement.

"I would do it again in a heartbeat, because until their rescue these hens never got to touch grass or feel the sunshine, and now they can live out the rest of their lives as chickens should."

The animals now live in Grass Valley, California, at Animal Place, one of the oldest and largest sanctuaries in the state, according to the group. The hens will be nursed back to health and available for adoption for backyard flocks throughout the state.

On Sunday, the animal sanctuary posted images of the hens freely walking around their new home stating this was the most room they've ever had to roam.

Animal Place said that any of the rescued hens that are too ill to be adopted will remain at the sanctuary and be given lifelong care.