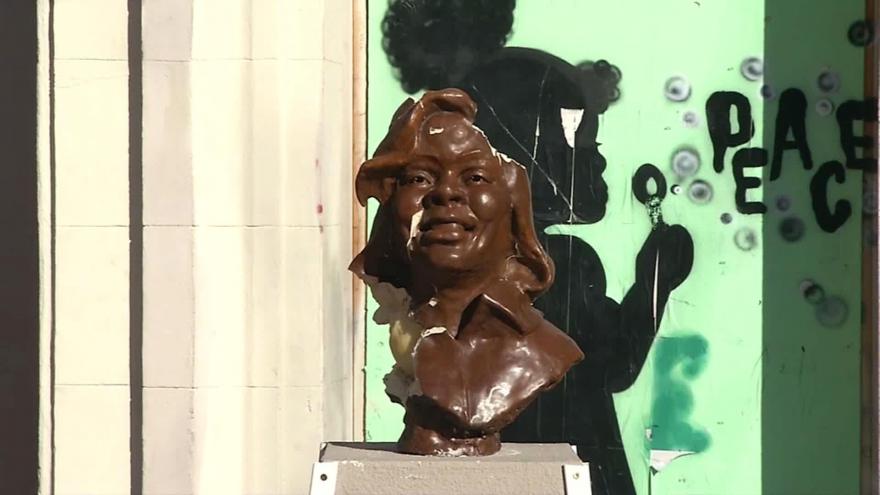 A bust of Breonna Taylor was vandalized two weeks after it was erected in Oakland, California.

(CNN) -- A bust of Breonna Taylor erected to honor her memory was found smashed and vandalized in Oakland, California.

The ceramic bust, which depicts a smiling Taylor, was installed in downtown Oakland near City Hall. The bust was secured on a base with a plaque that read "Say her name: Breonna Taylor."

But on Saturday, just two weeks after its installation, the sculpture was found in pieces. Chunks from the back and side of the bust were missing, and parts of Taylor's ceramic face were chipped.

The Oakland Police Department confirmed to CNN that it's investigating the act of vandalism, though it didn't identify any potential suspects or motives.

Leo Carson, the artist who created the bust, told CNN that he considers it "an act of racist aggression aimed at suppressing the fight for Black freedom."

He found out the bust was damaged in an Instagram message, he said, when a follower sent him an image of its smashed pieces.

The act of vandalism was an affront to Carson's motivation behind the bust, which he said he created to "uplift and embolden protesters" when they gather in downtown Oakland to organize against racism and injustice, he told CNN.

In March, Taylor, a 26-year-old EMT, was shot and killed by police in her Louisville, Kentucky, apartment during a botched raid. Her death at the hands of law enforcement, and its proximity to the killings of Ahmaud Arbery and George Floyd, helped fuel a massive movement for racial justice and police reform.

To prevent future damage to the Taylor bust, Carson intends to rebuild it in bronze with donations from the GoFundMe page, which has already surpassed its $5,000 goal.

"The vandals wanted to intimidate and silence the Black Lives Matter movement, and this is a demonstration that they are few and we are thousands," Carson said of reaching his fundraising goal.

Any leftover funds will be donated to Taylor's family, Carson wrote on the fundraising platform.