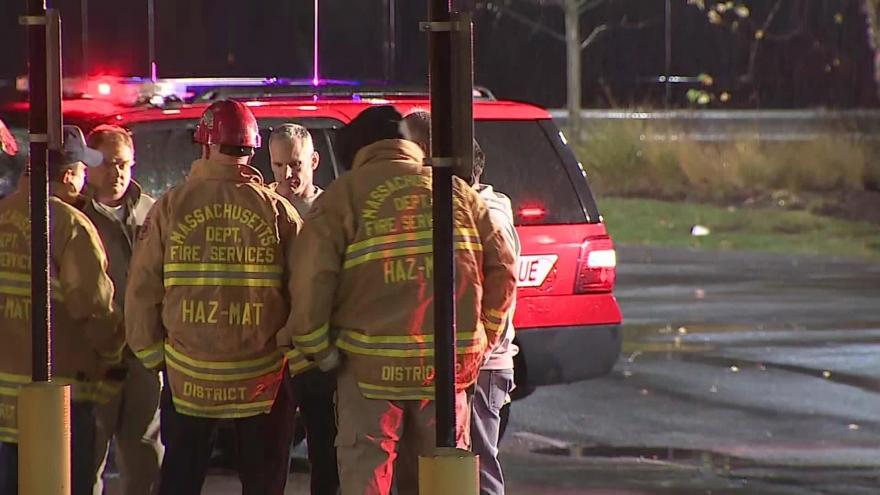 (CNN) -- The general manager of a Buffalo Wild Wings in the Boston area died after two cleaning agents combined to create toxic fumes in the restaurant's kitchen, officials said.

The incident at the restaurant in Burlington began around 5:30 p.m. Thursday, with workers and customers, some coughing, streaming out of the facility as fumes spread, witnesses told CNN affiliate WCVB.

Ryan Baldera, 32, was taken to a hospital, where he died. Thirteen other people -- 11 employees and two patrons -- were also hospitalized with burning eyes and difficulty breathing, the Burlington Fire Department said.

A restaurant employee put a chlorine bleach-based product, Super 8, and acid-based cleaner Scale Kleen on the kitchen floor while cleaning it, the fire department said in a news release, citing a preliminary investigation it conducted with the Occupational Safety and Health Administration.

The bleach and acid reacted with each other, creating toxic fumes, the fire department said.

After that employee was overwhelmed by fumes and left the building, Baldera tried to "squeegee the product out of the building when he was overcome," Burlington Interim Fire Chief Michael Patterson told reporters Thursday.

A manufacturer of Super 8 describes the product as a sanitizer designed for dishwashing by machine or by hand.

Patterson said he was told that Super 8 is a "common product used in floor cleaning."

The cause of the incident is under investigation by the fire department and OSHA.

"We are shocked and saddened to learn of this horrific accident at our franchise-owned sports bar and are working closely with our franchisee and the authorities while they conduct an investigation," Buffalo Wild Wings said in a statement, referring all other questions to local authorities due to the ongoing investigation.

The Burlington Area Chamber of Commerce set up a memorial fund for Baldera's family.

Customers told CNN affiliate WHDH that they could smell a strong chemical odor, and people closest to the kitchen began coughing and moving outside.

"Imagine, like, you're in the pool, but add bleach to that. It smelled horrible," Michael Burnstein told WHDH.

"I think one of the things that went through my mind is, we're sitting there, like, 'What are we supposed to do? Is everything OK? Should we even be breathing this air?'"