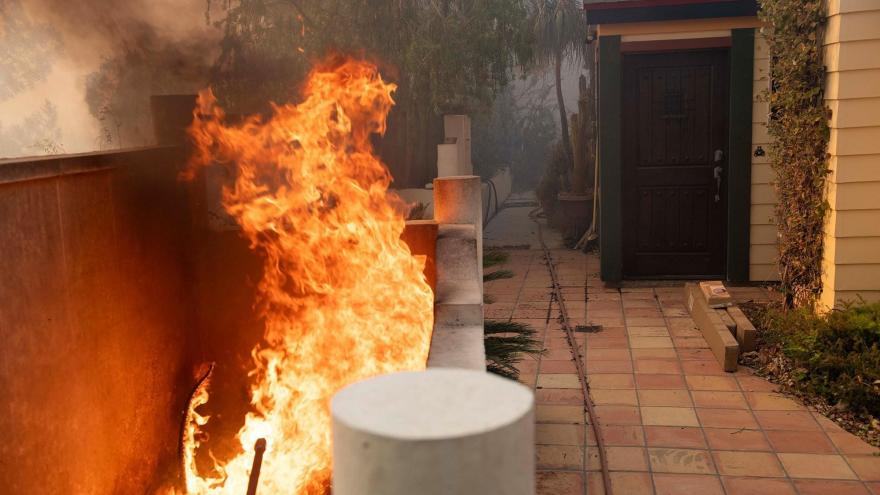 The Tick fire near Santa Clarita broke out Thursday and in just a few hours has burned about 3,950 acres, the Los Angeles County Fire Department said. It was 5% contained by late Thursday.

(CNN) -- Lisa and Dave Gott and about 15 other neighbors rallied as the fast-moving Tick Fire descended upon their neighborhood near Santa Clarita, California.

Firefighters were busy elsewhere and it was time for residents to do what they could to protect their homes north of Los Angeles late Thursday: They used garden hoses to lay down at least a little moisture.

"All those embers would have blown into homes," Dave Gott said Friday.

As it turned out, three homes in their Stone Crest neighborhood were destroyed.

The wildfire forces thousands of residents to evacuate their homes, fire officials said.

The Tick Fire near Santa Clarita broke out Thursday and by Friday morning had burned 4,300 acres, driven by strong winds, the Los Angeles County Fire Department said. It was 5% contained at that time.

About 10,000 structures are threatened, the department said, and an unknown number have been damaged or destroyed.

The cause was unknown.

The Agua Dulce area, where the Tick Fire is burning, was part of the ongoing intentional power outages in the region, said Lois Bruce, a spokeswoman with Southern California Edison.

Mandatory evacuations were ordered for homes in the northern area of Los Angeles County and several shelters were opened.

Mike Bath lives near a neighbor family that lost their home in Stone Crest. His family returned Friday to find their dwelling was OK.

He recalled the fiery scene.

"You wouldn't see anything here but orange triple the height of the houses. We left thinking there might not be anything to come back to." He credited firefighters with limiting the damage.

An animal protection nonprofit group was scrambling to evacuate animals from its farm in Santa Clarita as a large plume of dark smoke was spotted near the property.

"Please support our efforts to activate our emergency plan! We can use all the help possible," the Gentle Barn wrote on Instagram.

The group later wrote it was able to transfer all animals out of the barn after they were ordered to evacuate.

In Northern California, the Kincade Fire scorched 10,000 acres and more than 550 homes were placed under evacuation orders.

The blaze was fueled in part by high winds that had already prompted California electric utilities to intentionally cut power to thousands of residents.