A boy was bullied with anti-immigrant taunts. His mom was beaten when she defended him 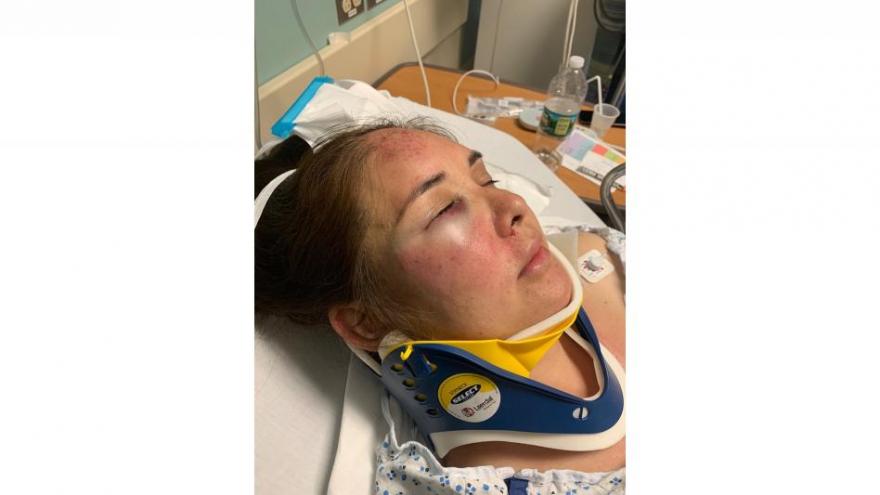 A 13-year-old New Jersey boy faces assault charges for allegedly attacking the mother of a classmate, after the classmate reported him to school officials for anti-immigrant taunts, the Passaic County Prosecutor's Office said in a media release.

(CNN) -- A 13-year-old New Jersey boy faces assault charges for allegedly attacking the mother of a classmate, after the classmate reported him to school officials for anti-immigrant taunts, the Passaic County Prosecutor's Office said in a media release.

The mother, identified as Beronica Ruiz by her attorney, Daniel Santiago, told authorities she was walking down a street in Passaic, New Jersey, with her 1-year-old baby and her 12-year-old son on June 19 when she and her son were attacked.

Santiago told CNN that the conflict began at school the day before the attack, when the 13-year-old and some other boys chanted "go back to Mexico" to a group of students in the cafeteria.

Ruiz's son, who is an American citizen, replied, "What are you talking about? We all come from immigrants," the attorney said.

The group allegedly threatened to beat up the boy after school. This scared Ruiz's son, so he pulled one of the teachers aside and conveyed his fear, according to Santiago.

The teacher called a security guard, who then sequestered Ruiz's son in a classroom for the duration of the school day for his own safety, he said.

Later that day, Ruiz picked up her son from school. As they were walking home, Ruiz's son said to her, "Mommy, the boys that threatened me yesterday are following us," Santiago said. They kept walking, but the three boys caught up to them, the attorney said.

Santiago told CNN that the 13-year-old punched Ruiz's son in the face, knocking him to the ground. Ruiz then put herself between her son and the assailant, asking him to leave them alone, the attorney said. He swore at her, then punched Ruiz in the face, Santiago said.

"When the mother stepped in front of (the boy), he struck her, causing her to temporarily lose consciousness and fall to the sidewalk,'' the statement from the prosecutor's office said.

The three boys then fled the scene. Ruiz called the police after she regained consciousness, and she was treated at a nearby hospital for facial fractures and a concussion. Her son suffered a swollen lip, Santiago said.

The physical pain is healing, but the emotional wounds still linger

The 13-year-old was charged with aggravated assault and later released to his parents, authorities said. He has not been identified publicly because he is a minor.

There is no court date as of yet, said Jason Harding, chief assistant prosecutor at the Passaic County Prosecutor's Office. If convicted on the assault charge, the boy faces up to two years in juvenile detention.

The school, Passaic Gifted and Talented Academy, has offered to pay for Ruiz's medical bills, Santiago said. CNN has reached out to the school's principal and the superintendent's office for comment.

Ruiz's physical injuries are starting to heal, and the pain is starting to fade, but she's terrified for the safety of her son, the attorney said.

"The emotional scar is what the biggest issue is," Santiago said.