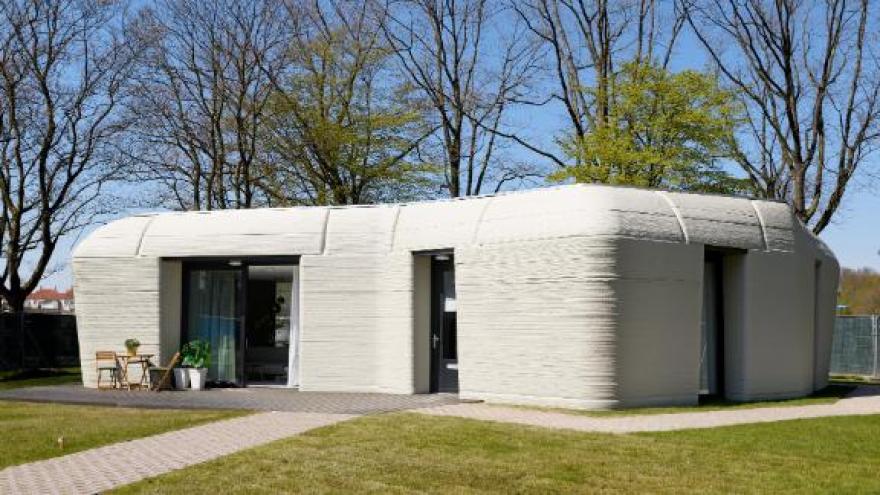 (CNN) -- A Dutch couple have become the proud new tenants of the country's first ever 3D-printed house.

Elize Lutz and Harrie Dekkers have been given the digital key to the gray, boulder-shaped building in the Bosrijk neighborhood of Eindhoven, in the southern Netherlands.

The single-story home has more than 1,000 square feet of floor area, with a spacious living room and two bedrooms.

Lutz, 71, and Dekkers, 67, replied to an advertisement seeking tenants for the groundbreaking project.

Now retired, the former shopkeepers from Amsterdam will move into their new home on August 1 -- although their tenancy will last for just six months.

"We are always looking for special places to live," Dekkers told CNN. "It's so unusual."

According to the project's website, it "is the world's first commercial housing project based on 3D-concrete printing."

More than just an experiment, the house was built to be fully habitable for several decades and designed to resemble a boulder in order to blend with its natural surroundings.

It consists of 24 concrete elements, which were printed layer-by-layer at a plant in Eindhoven. The elements were then transported by truck to the building site and placed on a foundation.

The printer consists of a robot with a mechanical arm that can move on a track in seven different directions to lay mortar in a pattern on a printbed -- as designed on a computer.

The dry mortar in a silo is mixed with water in a mixer and pumped via a hose to a nozzle mounted on the end of the robot arm.

The entire project took around a year to complete, though the physical printing took just 120 hours. The rest, say the project backers, was down to "trial and error" and perfecting the construction process.

The inclining walls presented a particular challenge, but this has now been perfected, a spokesman for the collaboration told CNN.

Vesteda, which owns the house, will rent it out to private tenants.

In principle, houses "printed" in this way can be built much faster and with more flexibility than traditional models. Less concrete is needed, therefore also making them more sustainable.

Lutz said she loved the idea of the project as soon as she heard about it. She said an image she saw of the plans reminded her of childhood walks with her grandfather, who illustrated children's books.

"It reminded me of a special way of living," she said. "It looked very safe."

When they learned about the opportunity to move in, the couple applied immediately -- and were delighted to be chosen. They are now looking forward to moving from their current apartment in Amsterdam, an hour-and-a-half away, to their temporary new home.

"It's completely different," said Lutz. "In Amsterdam we look out at water and there we are in between lots of beautiful trees."

Over the past few years, a number of 3D-printed homes and communities have been conceptualized, promising quick build times and low construction costs, from a 400-square-foot home printed in 24 hours in Russia in 2017, to an entire neighborhood printed in Mexico two years later.

Meanwhile, in Austin, Texas, a series of two- to four-bedroom residences will be ready later this year.

And in the small Italian town of Massa Lombarda, Mario Cucinella Architects has completed a prototype for a 3D-printed home made from clay.

Now that the first house in the Dutch project is complete, work will begin on the other four, which will have more than one story.

Yasin Torunoglu, alderman for housing and spatial development in the Eindhoven municipality, said in a statement: "Innovation is an important pillar in construction. In addition to affordable homes, the market increasingly demands innovative housing concepts. With the 3D-printed home, we're now setting the tone for the future: the rapid realization of affordable homes with control over the shape of your own house."