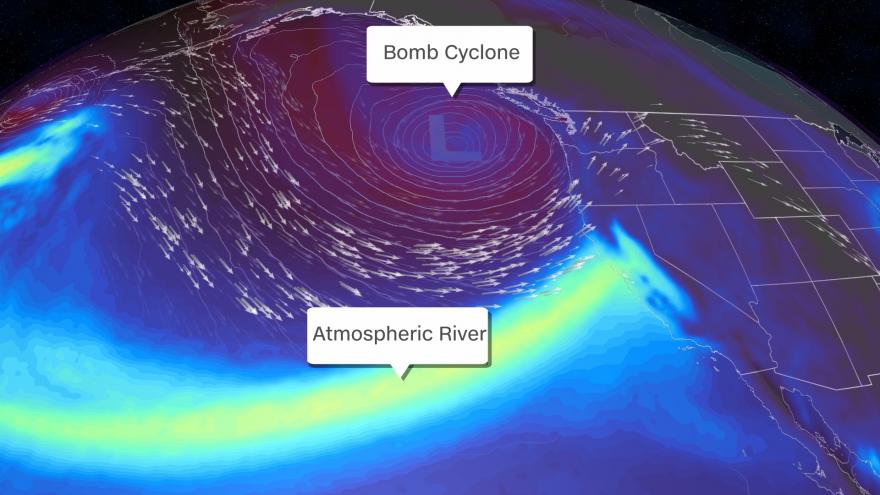 (CNN) -- A "bomb cyclone" with hurricane-like strength and a chart-topping "atmospheric river" will coincide Saturday night into Sunday to unleash flooding rains, wet snow, strong winds and coastal surf across the western US.

This will be the third and strongest in a series of storms to strike the West Coast this week.

A bomb cyclone is a system that drops at least 24 mb in pressure 24 hours or less -- and typically the lower the pressure, the stronger the storm. Atmospheric rivers are narrow bands of concentrated moisture that cruise more than 2 miles above the ocean and release rain or snow when they hit land -- and this one rates level 5 of 5.

These two simultaneous events will result in the season's first heavy, wet snow across the Sierras and periods of soaking rains for the coastline and valleys across central and Northern California. Areas of Washington and Oregon will also see impacts through the weekend.

This system is forecast to rapidly strengthen on approach to the Pacific Northwest, becoming a "bomb cyclone" over the next 24 to 48 hours. This system could be one of the lowest pressure storms to ever develop across the northeastern Pacific Ocean, with a forecast pressure comparable to major hurricanes in the Atlantic.

"I don't think a lot of people realize that these cyclones in the northern Pacific can be equivalent to a hurricane in the Gulf of Mexico or Atlantic," Carly Kovacik, a lead meteorologist for the National Weather Service office in Seattle, told CNN. "A lot of these storms produce very strong winds and high seas, but since they are mid-latitude storms, we just don't call them hurricanes even though the impacts can be very similar."

Like a hurricane, the track of this particular system matters in terms of what impacts will be felt this weekend across the Pacific Northwest.

If the system takes a more northerly track -- like the storm earlier this week did -- the impacts will be lesser across Washington and Oregon, Kovacik explained. But if the center of the storm takes a more southerly track toward Vancouver Island, the impacts to the coast and inland areas will increase, meaning stronger winds and higher swells.

There is more confidence that the strongest impacts of the storm will be felt just offshore and across the open Pacific, where hurricane-force winds and seas over 20 feet are forecast.

Directly along the coast, strong winds with gusts to 60 mph are possible, in addition to high surf.

These high surf conditions could lead to "sneaker waves" that could catch beach-goers Sunday and Monday off guard, knocking them off their feet and sweeping them into the ocean, said Colby Neuman, a meteorologist for the weather service office in Portland, Oregon.

There is also a chance of severe storms that could produce some brief tornadoes Sunday across the Oregon coast.

"There is a mini-season for tornadoes in the late fall months that we do see tornadoes along our coastline on occasion," Neuman told CNN. "It is certainly not every year, but every few years we do get one or two."

The Storm Prediction Center has issued a level 1 out of 5 risk for severe storms Sunday afternoon and evening for the Oregon coast, noting that it could raise the risk to a level 2 out of 5 later this weekend.

"We are going to have these very intense rotating showers, mini-supercells coming onto our coastline, and they could legitimately put down a tornado on Sunday," Neuman said.

Farther inland, heavy rain and river flooding are a concern as widespread rainfall totals of 3 to 5 inches are forecast through Tuesday across the Pacific Northwest.

In addition to the bomb cyclone, California will have to contend with a rare level 5 atmospheric river event.

"An atmospheric river marked as a category 4 or a 5 is capable of producing remarkable rainfall totals over three or more days, likely to exceed 10% to 15% of a typical year's precipitation in some locations," said Marty Ralph, director of the Center for Western Weather and Water Extremes at the University of California San Diego.

Flash flood watches have been issued across the Northern and central portions of California, where widespread rainfall totals of 3 to 6 inches are forecast and isolated locations could see upwards of 8 to 10 inches of rain through Tuesday.

Rain will pound places ravaged by wildfires as far back as 2018 and threaten to send loose fire detritus flooding into surrounding areas.

"When we get moderate to heavy rain over these recent burn scars, they can create ash or debris flows," Anna Wanless, meteorologist for the weather service office in Sacramento, told CNN. "What that means is mud, ash, and other debris such as trees, boulders and rocks can get picked up in a fast-moving flow (of water), and that can be really dangerous if people are caught in that."

Noted the prediction center: "This impressive atmospheric river will result in heavier rainfall amounts and in a shorter time span, leading to more flash flooding and debris flow concerns for burn-scarred areas of California."

Along with the heavy rain threat, feet of snow are also possible across the Sierras, where winter storm watches have been issued.

This is early in the season for a snow storm of this caliber. It is expected to be the first significant heavy, wet snow event for the Sierras this fall-winter season, Wanless told CNN.

"Everyone is pretty excited to get a decent rain/snow at this time of year, especially since last winter was so dry," Wanless said. "So, to see a system like this so early is hopeful, but we cannot guarantee that it is going to continue through the rest of the winter."

The West will need to continue to see many more storm like this over the next several months in order to make a dent in the drought and fill their draining reservoirs.