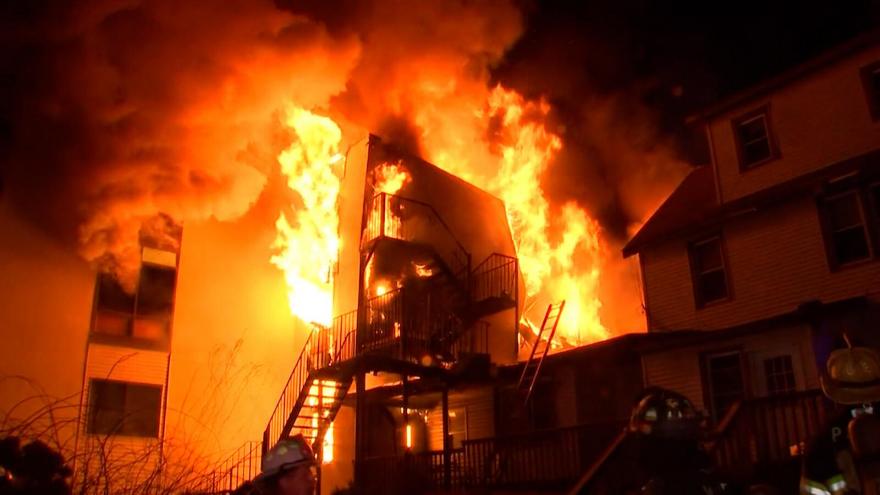 One firefighter was unaccounted for after the fire at a Spring Valley senior assisted-living facility.

Teams were digging through the rubble of Evergreen Court Home for Adults in Spring Valley to find the firefighter recovered a body, officials said Wednesday.

Jared Lloyd's death was confirmed Wednesday by the New York State Division of Homeland Security and Emergency Services. He was 35 years old.

"His loss and heroism will never be forgotten," County Executive Ed Day said. "Over a hundred elderly residents, some infirm, many physically limited, are alive today due to our community coming together to accomplish what can be said is a herculean task."

All uniformed members of the state's Office of Fire Prevention and Control have been directed "to display the black mourning band on their uniform badge until sunset of the day he is laid to rest," State Fire Administrator Francis Nerney said in a notification to New York's fire service organizations.

The fire began overnight and sent Rockland County firefighters streaming inside to rescue disabled and elderly residents unable to escape the flames.

About 20 to 25 residents of the building were rescued, Rockland County Fire Coordinator Chris Kear said. He said Wednesday that 13 residents were injured, and one remains in critical condition.

One firefighter who was trying to rescue someone on the third floor got lost and issued a mayday call during the blaze, Kear said. Other firefighters couldn't find their missing comrade, later identified as Lloyd.

"With the extent of the fire and the volume of fire, the conditions were just too unbearable where firefighters went in, and they just could not locate the firefighter, and they had to back out," Kear said.

The Evergreen Court Home for Adults in a statement offered "our deepest condolences and prayers to the family of Jared Lloyd, the brave firefighter who tragically lost his life Tuesday morning. Words cannot express the pain they must feel at this time. We hope they take comfort in knowing their son is a true hero whose bravery and courage saved countless lives."

Two other firefighters were sent to area hospitals, including one who will remain hospitalized for smoke inhalation and high levels of carbon monoxide in the blood, Kear said.

The resident who perished was pronounced dead at a hospital, Kear said. There is no official speculation on the fire's cause, Kear said.

The fire caused much of the building to collapse.

Despite the destruction, he praised the all-volunteer fire department and other first responders who ran into the burning building.

"It's a sad day on many fronts, but the work by the local fire department mutual aid companies and the Spring Valley Police Department saved numerous, numerous lives here," he said. "There was a lot of heroic actions that were taken here by all the emergency services."

Denise Kerr, the director of the Evergreen Court Home, said in a statement the fire was "an unspeakable tragedy."

"We join the community in mourning the loss of our resident who passed away and pray for the safety of the missing firefighter," she said.

All 112 residents of the facility are accounted for and have been placed in a new home, she added, praising staff and first responders for helping them to safety.

"Our staff was truly heroic in evacuating residents who were inside the building as the fire spread, and we are forever grateful to the first responders whose actions undoubtedly saved lives," Kerr said.

Kerr said the home is cooperating with investigators and has launched its own internal investigation as well.

Seniors in wheelchairs whisked from danger

Spring Valley resident Hershey Green and others saw the flames and ran in to help residents, he told CNN affiliate WCBS.

They "literally ran in and helped out with the seniors," Green said as flames continued to burn through the building behind him. "There was plenty of just good Samaritans out here, about eight of them that literally ran into the building and bring them out in the wheelchairs, walkers, and literally picking them up and physically removing them out of the danger."

Residents were put onto a school bus as their home burned, Greed told WCBS.

Firefighters doused the building with water as towering flames tore through what was left of the structure, video shows.

Raymond Rodriguez was staying at his uncle's apartment near the senior center when the fire started, he told CNN affiliate WABC.

Rodriguez could see firefighters pull two people from the fire, he said.

"It's just a sad day for the people of this town" he told WABC, adding that firefighters evacuated people to the courtyard in the building where he was staying as they fought the blaze.

Charles Crippen, who lives in the building with the melted siding, was prepared to leave his home if the fire spread, he said.

"It's pretty devastating," he told WABC. "That's a lot of old folks that was living over there, handicapped and stuff like that, and they are all out of a home now."

Correction: An earlier version of this story reported an incorrect number of residents taken to the hospital based on information provided by the Rockland County Fire Coordinator. Thirteen people were transported to hospital. The story also incorrectly reported the status of a firefighter based on information from a New York State Police trooper. No firefighter suffered a heart attack on scene.