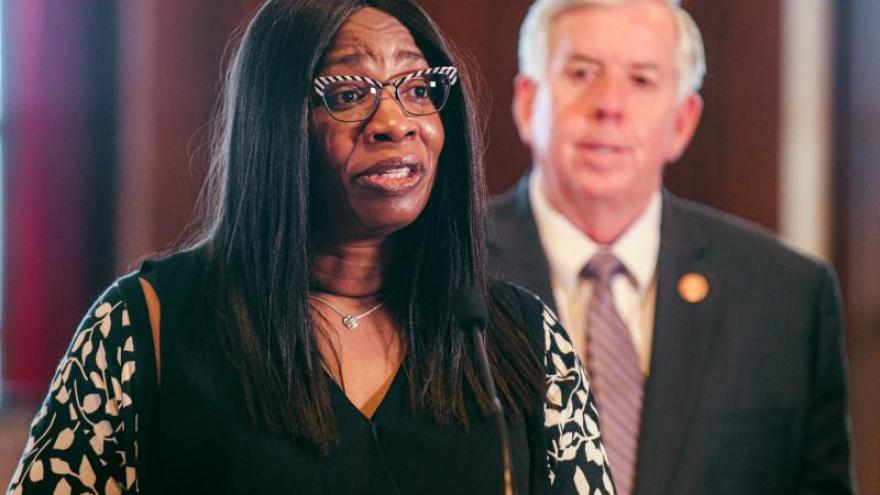 Judge Robin Ransom, who was appointed to the Missouri Supreme Court on Monday, talks to reporters during a news conference on Monday as Gov. Mike Parson looks on.

(CNN) -- A Black woman will soon sit on Missouri's highest court for the first time.

Ransom most recently served on the Missouri Court of Appeals, Eastern District, a post that Parson appointed her to in 2019.

She previously spent a little over a decade as a circuit judge for the city of St. Louis and was a family court commissioner before that. She also has experience in the St. Louis County prosecuting attorney's office and public defender's office.

"I am proud and honored to name Judge Robin Ransom as the newest member of the state's highest court," Parson said in a statement.

"Judge Ransom will add valuable experience, perspective, and balance to the court. I have high confidence that she will continue to be a fair enforcer of the law, faithfully interpret the law as written, and reasonably consider decisions made at the trial and appellate level in her own evaluation."

Ransom is the third Black judge on Missouri's high court

Aside from being the first Black woman named to the state's Supreme Court, Ransom is only the third African American judge to serve on it -- feats she alluded to in her remarks.

"Of course it's not lost on me the historic nature of this appointment, to be the first African American woman appointed to the Missouri Supreme Court," she said at a news conference on Monday.

"As the daughter of a fireman who worked and lived in a segregated engine house when he worked for the fire department, this is a very happy day for my mom, myself and my entire family."

But Ransom emphasized that she sees herself as much more than her racial identity, saying that she has "never lived by a label or by any identity that anyone's tried to put upon me."

Ransom will help decide key cases in the state

Ransom's appointment could have significant implications for how key cases in the state are decided, though she cautioned constituents that her role comes with limitations.

Among the questions likely to go before the high court in upcoming weeks is whether the state must expand Medicaid, given that voters approved a plan to do so last year.

The announcement also comes as local government officials and law enforcement in Kansas City, Missouri, could be gearing up for a court battle over police funding -- one that could eventually make its way up to the state's Supreme Court.

The Kansas City council recently passed two ordinances that would reallocate more than $40 million of the city's police budget towards other community services and crime prevention efforts. The police commissioners board is expected to sue over the move, according to minutes from a Monday meeting.

Parson, who is a Republican, told local talk radio station KCMO on Monday that he would take support for law enforcement into consideration when selecting judges to serve on the Missouri Supreme Court.

"We're going to pick three Supreme Court judges in the next four years as we go through this process," he told the station. "I'm going to make sure that these judges hopefully understand how important law enforcement is to me and to this state."

Later that day, though, Parson declined to elaborate on those comments and said his decision to appoint Ransom wasn't based on any specific cases that are set to appear before the high court.