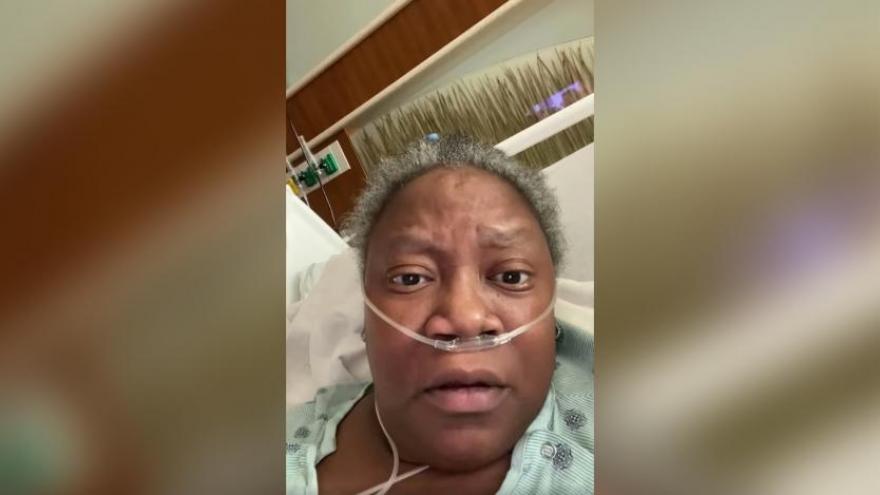 Black physician Susan Moore died of Covid-19 weeks after she described a White doctor dismissing her pain and concerns about her treatment as she lay in an Indiana hospital.

(CNN) -- A Black physician died of Covid-19 weeks after she described a White doctor dismissing her pain and concerns about her treatment as she lay in an Indiana hospital.

Dr. Susan Moore passed away on Sunday due to complications from Covid-19, her son told the New York Times. The internist died about two weeks after she shared a video in which she accused a doctor at Indiana University Health North Hospital (IU North) of ignoring her complaints of pain and requests for medication because she was Black, even though she was both a patient and a doctor herself.

In a video that was posted earlier this month, she filmed herself from a hospital bed and recounted her experience at IU North. Moore said her doctor brushed off her symptoms, telling her, "You're not even short of breath."

"Yes, I am," Moore said in the video, which she shared on Facebook December 4.

She had to beg to receive remdesivir, she recalled in the video, the antiviral drug used to treat patients who are hospitalized for Covid-19 and are not in need of mechanical ventilation.

And despite her pain, the doctor told Moore he might send her home, she said, and he didn't feel comfortable giving her more narcotics.

"He made me feel like I was a drug addict," she said in the video. "And he knew I was a physician."

Moore had also posted updates on her Facebook page along with the video.

Moore, who was an internist, said her pain was "adequately treated" only after she raised concerns about her treatment. She was later discharged from IU North, but returned to a different hospital less than 12 hours later, she wrote on her Facebook page.

"I put forth and I maintain if I was White, I wouldn't have to go through that," Moore said.

A spokesman for IU North confirmed to CNN that Moore was a patient at the hospital and that she was eventually discharged, but declined to say more about her, citing patient privacy.

"As an organization committed to equity an reducing racial disparities in healthcare, we take accusations of discrimination very seriously and investigate every allegation," the spokesman said.

In a statement issued on Thursday, Dennis M. Murphy, President and CEO of Indiana University Health, defended the technical aspects of the treatment Moore received, while conceding "that we may not have shown the level of compassion and respect we strive for in understanding what matters most to patients."

He also asked for an external review of the case.

Racism in health care is nothing new

Moore's story speaks to a broader issue of what experts call implicit racial bias in health care toward Black patients. Studies have shown that Black patients are in some situations prescribed less pain medication than their White counterparts. And a recent article in the New England Journal of Medicine attributed unequal treatment in part to "enduring racist cultural beliefs and practices."

The article cited a 2016 study that found half of White medical students and residents "held unfounded beliefs about intrinsic biologic differences between Black people and White people," falsely believing the pain of Black patients was less severe than White patients.

"Acceptance of this inequitable treatment as 'normal' is historically rooted in and supported by the belief that Black people are intrinsically disease-prone and, implicitly or explicitly, not deserving of high-quality care," the authors of the New England Journal of Medicine article wrote, comparing the issue of racism in medicine to racism in policing.

Racial disparities in medical treatment have been further underscored by Covid-19, which disproportionately impacts communities of color.

To a "majority of physicians, predominantly who are White in the United States, the perception is that African Americans do not need as much for pain," said Dr. Ala Stanford, a pediatric surgeon and the founder of the Black Doctors Covid-19 Consortium.

Moore leaves behind her 19-year-old son, Henry Muhammed, and her elderly parents, both of whom have dementia, according to a GoFundMe set up on their behalf.

According to the New York Times, Moore's family said she was born in Jamaica and grew up in Michigan before studying engineering at Kettering University. She then earned her medical degree from the University of Michigan Medical School, the Times reported. The GoFundMe page describes her as someone who loved to practice medicine and was proud to be a member of the Delta Sigma Theta sorority.

CNN has reached out to Moore's family for further comment. Her son told the New York Times she was adept at advocating for herself at hospitals, where she often received treatment for sarcoidosis, an inflammatory disease that affects the lungs.

"Nearly every time she went to the hospital she had to advocate for herself, fight for something in some way, shape or form, just to get baseline, proper care," he told the Times.

"This is how Black people get killed," Moore said in the video, "when you send them home and they don't know how to fight for themselves."

Stanford acknowledged Moore wasn't her patient, and she didn't know what the situation was at the hospital where she received treatment. But she felt that Moore's need to repeatedly advocate for her own care was "unacceptable."

Additionally, Moore's decision to ask for pain medicine was not just to relieve her pain, Stanford said, but also would support her recovery by making it easier for her to breathe. And Moore's request for an antiviral is now part of standard treatment for Covid-19, Stanford added.

"This is just basic," Stanford said. "This is standard for what you get. I know that from taking care of enough people with coronavirus in the hospital and helping them through it."

Moore first tested positive for Covid-19 on November 29, according to her Facebook post. By December 4, she was hospitalized at IU North in Carmel, Indiana. It was only after a CT scan showed new lymphadenopathy -- a disease in which the lymph nodes become enlarged -- that the hospital agreed to treat her pain, she said.

"You have to show proof that you have something wrong with you in order for you to get the medicine," she said in the video.

Dr. Stanford said that the lymphadenopathy would indicate that "the disease process was going on for a period of time," and that Moore's body was fighting off the disease.

According to her Facebook posts, Moore was eventually able to speak with the chief medical officer of IU Healthcare, who said he would ensure she get the best care. He also told her diversity training would be conducted.

On December 7, the hospital discharged Moore and sent her home, per her Facebook post. But less than 12 hours later, she was sent to a different hospital following a fever and a drop in her blood pressure, according to the Facebook post. Moore said she was receiving treatment for bacterial pneumonia and Covid pneumonia. She described the care at the second hospital as "very compassionate."

The next day Moore wrote she was being transferred to the ICU. It was the last update shared to her Facebook page.

Her story has resulted in an outpouring of generosity from people who have heard it, and the GoFundMe page has raised more than $100,000 as of Thursday night.

"She is me," said Sanders, who is also Black. "She is me and we are her. It could have been any one of us that happened to."

Stanford -- who told CNN she recognized implicit bias and racism in medicine, but had chosen to try to change things from within the health care system -- echoed that comment. She told CNN that when she first learned about Moore's story, it stopped her in her tracks and brought tears to her eyes.

She shared it with a group of her friends -- all Black women surgeons across the country. They could all relate, Stanford said, having experienced the same treatment despite their expertise.

"We all have the stories," she said.

"If any of us gets sick, please don't be silent. Be vigilant, be present, be public," Stanford wrote to them, adding of Moore, "She was one of us."