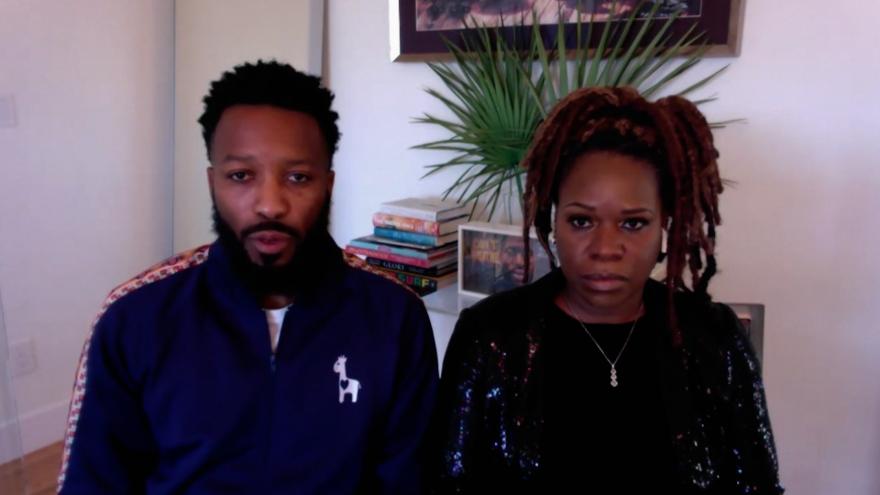 (CNN) -- Tenisha Tate-Austin and her husband became suspicious when the Northern California home they spent years renovating was valued by an appraiser far lower than they expected.

So when they asked for a second opinion last year, a White friend pretended to own their home and they removed all artwork and photos that could show that it actually belonged to a Black family.

The new appraisal for their home in Marin County was more than $1.4 million and nearly half a million dollars higher than the previous estimate, they said.

"What that appraisal did is what we were actually asking the appraisers to do, to not consider race, to not consider neighborhoods and or the lines that have been drawn and perpetuated by redlining," Tate-Austin told CNN.

Last week, the couple filed a lawsuit in federal court in San Francisco, arguing that racial discrimination played a role in the low valuation of their home.

In their lawsuit, the Austins say, the first appraiser, Janette Miller, who is a White woman, violated the Fair Housing Act when she took into account the family's race and the racial demographics of the house's location for her appraisal.

CNN has reached out to Miller and her company, Miller & Perotti Real Estate Appraisals, which has also been named as defendant in the suit, multiple times for comment.

The Austins are seeking financial damages and asked the court to "permanently" ensure that the defendants won't engage in discriminatory housing practices directly or through others, the lawsuit says.

The Austins had spent three years renovating their home. Since 2016, they added a deck, a gas fireplace, renovated the bathrooms, and even increased the total square feet of the home, the couple said.

"We put a lot of time and effort into the house, and that didn't happen overnight," Tate-Austin said.

When Miller appraised their home last year, the Austins say she compared their home to those in areas with a significant Black population, according to the lawsuit.

The population in Marin County, where they live, is more than 85% White, according to the US Census Bureau.

Research has shown that homes in largely Black neighborhoods are valued less than homes in mainly White areas, even when housing type and income of the areas are the same. In the average US neighborhoods where the share of the population is 50% Black, homes are valued at roughly half the price of homes in neighborhoods with no Black residents, according to recent research from the Brookings Institute.

Homes in majority Black neighborhoods in the US have been undervalued by an average of $46,000 over nearly a decade, according to an analysis by Redfin. The firm looked at more than 73 million single-family homes listed and sold between January 2013 and February 2021 and found a major gap between houses sold in Black and White neighborhoods.

Other homeowners are hiding their race

Like the Austins, there have been others families of color who recently have concealed their race or identity when getting their home appraised.

In Indianapolis, a Black woman previously told CNN she did not reveal her race or gender on an application when arranging for an appraisal. She kept communication to email and told the appraiser that she would be out of town and her brother would be at her home during the appraisal. Then a White friend posed as her brother and met the appraiser instead of her.

The appraised value more than doubled -- it had been her third appraisal -- and it led her to file a Fair Housing complaint against the lenders and appraisers she had worked with alleging racial discrimination.

The Austins said they took a chance at "white washing" their home because they knew of the discrepancy in home appraisals and they how they are not the first family who have received a lower home estimate.

The couple and their attorneys continue litigating their case but said they wanted to speak up to encourage other families of color to fight if they think their property is worth more.

"Hopefully, at the highest level we can start seeing systemic change and people being held accountable for devaluing Black and Brown lives, because that's essentially what they did to us," Paul Austin said.