A billionaire will pay off debt of Morehouse College's 2019 graduates. Here is what that gesture means 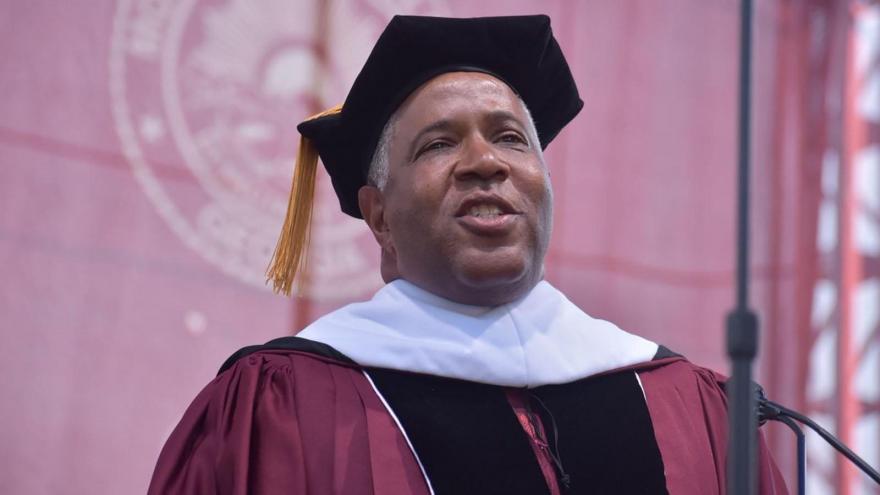 Billionaire investor Robert F. Smith announced during his commencement speech that he would pay off the student-loan debt for the Morehouse College graduating class of 2019.

"When you have to service debt, the choices about what you can go do in the world are constrained," Morehouse President David A. Thomas said Sunday. "(Smith's gift) gives them the liberty to follow their dreams, their passions." Thomas told CNN on Monday that the exact amount of student loan debt to be covered was still being calculated.

Smith's gesture, which Thomas called "a liberation gift," will enable graduates to have more capital to do things like start businesses and support their families.

Here are some reasons why Smith's pledge matters:

According to recent Federal Reserve data, Americans owe $1.5 trillion in student loans. Outstanding student loan debt exceeds auto loan debt ($1.1 trillion) and credit card debt ($977 billion). The issue of a free college has emerged as a key topic on the 2020 campaign trail. Several candidates have expressed support for making sure students can graduate without debt. One candidate, Massachusetts Sen. Elizabeth Warren, has proposed eliminating debt for tens of millions of Americans and making all public colleges tuition-free in an ambitious stance.

Morehouse graduate Jonathan Epps, 22, said he has $35,000 in student debt. Elijah Nesly Dormeus, who is the first of nine kids to graduate college, said he had $90,000 in debt.

"It'll sink in as the years go on. I know that for a fact," Epps said.

African-American students are more likely than their peers to take out federal student loans regardless of whether they attend public or private institutions or community colleges, according the Center for American Progress. The Center's analysis in 2017 of data from the National Center for Education Statistics shows more than 80% of black students took out loans for their undergraduate education within 12 years of entering school in the 2003-2004 school year at public and private institutions compared with more than 60% of white and Latino students.

At community colleges, more than 60% of African-American students took out federal loans and less than 50% of white or Latino students did within that time, the report said.

Nearly half of African-American students defaulted on a federal student loan within 12 years of entering college, according to the Center for American Progress report. Black students owed more than 100% of what they originally borrowed within that time, the report said

"On behalf of the eight generations of my family who have been in this country, we're going to put a little fuel in your bus," the 56-year-old Smith, the founder of the investment firm Vista Equity Partners, told the students of the school in Atlanta.

This story has been updated to reflect that the total amount Smith will pay is still being determined.