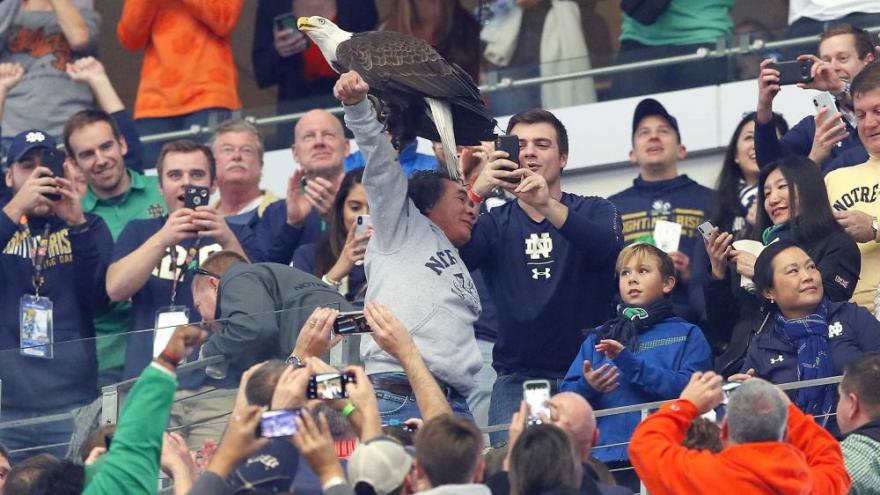 Some football fans at the Cotton Bowl ducked out of the way as a bald eagle, trained to fly around the stadium during the National Anthem and land on the field, grew confused and landed on two fans in the stands instead.

Some football fans at the Cotton Bowl ducked out of the way Saturday as a bald eagle, trained to fly around the stadium during the National Anthem and land on the field, grew confused and landed on two fans in the stands instead.

The eagle, named Clark, was supposed to circle AT&T Stadium and land on the field to kick off the College Football Playoff semi-final game between Clemson and Notre Dame in Arlington, Texas.

But as he made his way around the stadium, Clark startled the crowd by landing on the back of a surprised Notre Dame fan for a few seconds before taking off again.

Another Notre Dame fan then stuck his right arm out and Clark swooped down and perched on it until his trainer, Daniel Cone, came to pick him up.

Amused fans pulled out their phones and recorded photos and video of Clark's adventure.

Clark, an American Bald Eagle, was born at the World Bird Sanctuary near St. Louis, Missouri. Due to a deformity in the scales of his talons, he couldn't be released into the wild. So Clark entered the center's flight-training program and is now one of their flying ambassadors.

This was Clark's first time performing at AT&T stadium and it was his biggest venue, according to Cotton Bowl officials.

Before the game, the bird and his handlers practiced his routine without a hitch.

No one was injured in Clark's detour-filled flight, and the eagle is now resting with his handlers.

"While Clark's flight at the Cotton Bowl did not go as planned today, he is safe and sound," posted the World Bird Sanctuary on Facebook. "He tried his best in this very large, new, busy place, and is now relaxing with us and has enjoyed his planned victory meal. He will always be a champion to us!"

Some people on Twitter thought Clark's choice of landing spots might have been a good omen for Notre Dame. But the Fighting Irish got swamped by Clemson, 30-3.