A baby born with part of his skull missing beat the odds. He's the first with the condition to survive past birth 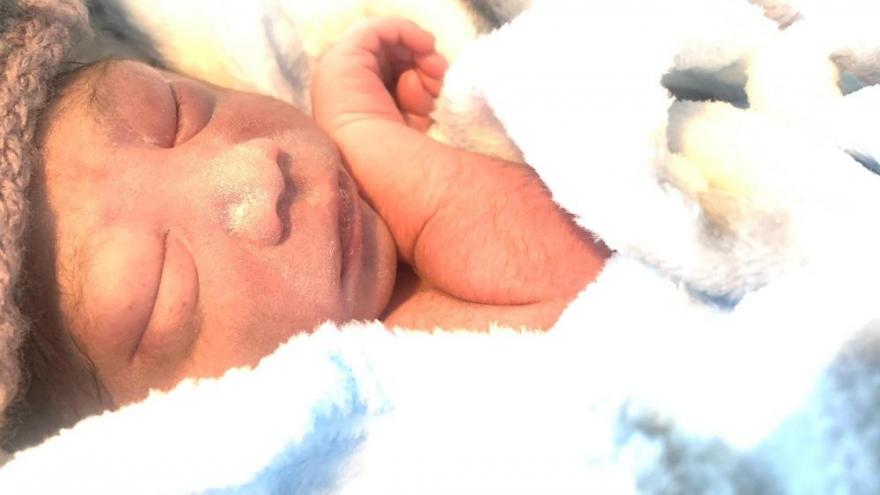 Lucas lived for hours, then days, surprising doctors. He underwent surgery four days after he was born.

(CNN) -- Maria Santa Maria was told she would never spend more than a few minutes with her son.

The mother of three girls from Garfield, New Jersey, had previously given birth without complications. But in the first few weeks of her most recent pregnancy, her baby was diagnosed with a rare cranial condition that is almost certainly fatal.

But now her son is 7 months old and living at home. He's the only baby known to survive his diagnosis.

Her baby's condition is rare

The crushing diagnosis came during Santa Maria's first ultrasound: Part of her baby's skull was missing. Doctors told her there was no hope for his survival.

"They always said there was no possibility of him making it," she said. "I did feel like I was losing him."

Her son has exencephaly, a rare condition in which a child's skull isn't fully formed, so the uncovered brain is exposed to amniotic fluid inside the uterus. The brain typically drives skull growth, but with part of the skull missing, the brain often grows in the path of least resistance, which can damage its function.

Previously reported cases of babies diagnosed with exencephaly have ended in death.

Her son defied odds and lived past his birth

Santa Maria's physicians gave her the option to abort her baby or, if he was born alive, spend a few minutes with him before his death. She chose the latter.

So when her son, who she named Lucas, was born, the Santa Marias braced for grief. Santa Maria's three young daughters visited their mother in the delivery room, where doctors explained that the baby brother they just met would soon die. Her husband Augusto called a funeral home to make arrangements.

But hours passed, and Lucas was breathing on his own. He was eating. He'd already been alive longer than any other child born with exencephaly.

The Santa Marias started to consider the possibility that their son might live.

A first-of-its-kind surgery saved him

That's when Dr. Tim Vogel, director of pediatric neurosurgery at the North Jersey Brain and Spine Center, suggested surgery. If he could stabilize Lucas and what looked like a water balloon on top of his head, the Santa Marias could bring their son home.

"If he goes home and this fluid sac ruptures, that would be unsurvivable," Vogel told CNN.

Half of Lucas' basal ganglia, the part of the brain responsible for sensory-motor integration, hadn't formed correctly, but the other half had, and was protected.

Luckily, young children have a high capacity for neuroplasticity, or the brain's ability to adapt to change and relearn. If Vogel removed the damaged part of Lucas' brain, he said, the functioning part could reassign the damaged area's duties. The procedure would reduce his likelihood of seizures and further brain damage, too.

The procedure had never been done before. But the Santa Marias decided the potential reward outweighed the risk.

After four days of convincing hospital staff to allow the procedure, Vogel was given the OK to operate on Lucas. The surgery went well, and he was sent home a few weeks later -- weeks longer than he was expected to survive.

At 7 months old, Lucas has recovered remarkably. He eats cereal and baby food, goes to physical therapy and coos to his mother when he's awake.

They're all signs that Lucas is developing on par with other children his age, Vogel said.

"I think he's exceeded our expectations," he said. "The fact that when we see him and he's eating, trying to crawl, getting physical therapy -- it's kind of an unwritten fast-forward."

Vogel will continue to work with Lucas as he grows to help foster his neurodevelopment and protect his brain.

"Lucas is going to be with me for a long time," Vogel said. "Every time I see him, it's just so encouraging."

For now, Santa Maria is just enjoying the time she's spent with her son. She never dreamed she'd know Lucas like this. It's hope, she said, for parents of children who've received diagnoses that seem insurmountable.

"Moms always say, 'Even if we had him for five minutes, it was all worth it,'" she said. "Thanks to God we got so much more than that."