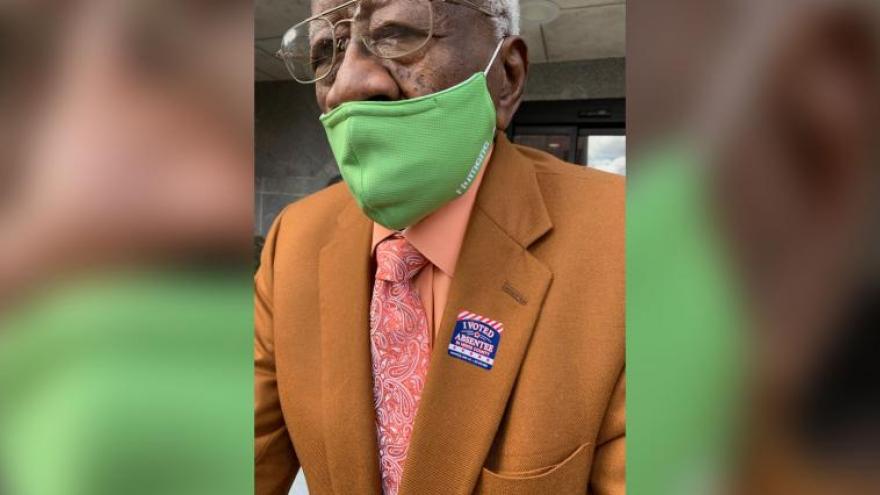 He is the son of a sharecropper, a US Army veteran who served in World War II and a retired educator who spent decades working at historically Black colleges and universities (HBCUs).

Smith also remembers a time when many African Americans, including himself, couldn't vote. When he turned 21 in 1942, he said he wasn't allowed to register in Louisiana, and he cast his first ballot only after he returned from the war in 1946.

Though the 15th Amendment legally granted African American men the right to vote in 1870, discriminatory voting practices in many states meant that Black people were effectively barred from voting until the Voting Rights Act was enacted nearly 100 years later.

So as Smith waited in line about 10 days ago to drop off his ballot at the Hinds County Courthouse in Jackson, Mississippi, he said he was cognizant of that fact.

"I lived through the whole process of gaining the ballot, so being able to participate was satisfying for me," he told CNN.

Smith said he had been following the presidential campaign closely, listening to what both candidates said about their visions for the country as they traveled the nation over these past few months. He cast his ballot early on the advice of his son.

Though the line at the courthouse was long and moving slowly, Smith said, he was happy to be there as people exercised their constitutional right.

"It was very pleasing to see so many people out to vote," he added. "And to be a part of the excitement that was going on around me."

Smith was born on a plantation in Louisiana

Smith was born in May 1921 on a plantation in the small town of Rayville, Louisiana. His father was a sharecropper who eventually became a Baptist preacher.

Smith was the first person in this family to finish high school and attend college. But his education was interrupted when he was drafted by the US Army in World War II. It was then, when he was stationed at Camp Kilmer in New Jersey, that he met his future wife, Grayce, on a night that he and a friend ventured into New York City.

After the war, the couple got married and Smith went back to school. He earned his bachelor's degree from what is now Southern University and A&M College in Baton Rouge, and his master's degree at the University of Illinois at Urbana-Champaign. After completing his PhD, he was hired as a professor at Florida A&M University in Tallahassee, where he lived with his wife and their three children for 20 years.

Eventually, he made his way to Mississippi, becoming a dean at Jackson State University and Tougaloo College before retiring in 2002 -- when he was older than 80. Because he loved teaching college students and being a role model for young adults, he said, his job never really felt like work.

Now as Americans head to the polls, Smith said he's excited to have a say in who will become the next president of the United States.

"Any time you can play a role in the selection of leadership it's a good feeling," he said.