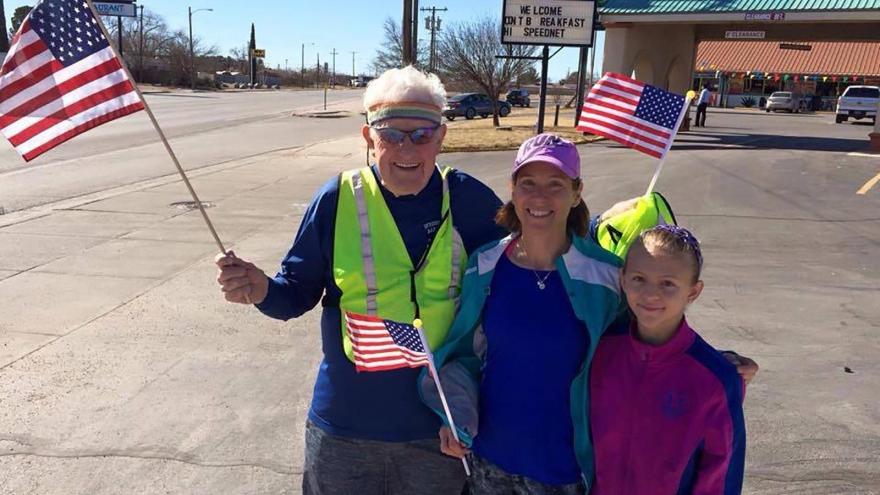 Ernie Andrus has drawn thousands of supporters during his runs.

(CNN) -- Two months after he turned 90, Ernie Andrus wanted to do something special, a feat that people assumed at his age he couldn't complete.

Over the course of two years and 10 months, over 2,631 miles, he crossed the country on foot, running from California to Georgia. He finished in August 2016, one day after his 93rd birthday.

"I could never turn down the chance for an adventure," he told CNN by telephone Wednesday.

At age 95, the World War II veteran has decided to do it again.

He celebrated the Fourth of July with a slow run through the Florida Panhandle town of Monticello. He's clocked 175 miles into his second coast-to-coast trek, which he began in March when he left from Georgia's St. Simons Island.

Andrus expects it'll take him five years to make his way from the Atlantic to the Pacific Ocean.

He hopes to run 13 miles a week through grueling heat or freezing cold for as long as he can. It's an effort he hopes will attract the attention of the branch of the military in which he served.

As he runs, the Navy veteran is raising funds to sail a restored World War II tanker to Normandy for a D-Day anniversary, a feat that he says will cost millions.

He runs for fun and funds

Andrus served in the Navy's Hospital Corps during World War II, manning the sick bay on a landing ship tanker or LST in the Pacific Ocean. His position didn't see much action, so he would stick his head through the porthole to "see the fireworks," he said.

Even when he was a young man, running served as a release for Andrus. When pangs of depression struck, he'd hop off the ship and take off running on the Pacific islands where it was stationed. The damp heat kept those runs short, he said.

When he and his shipmates caught wind that a mostly intact LST, the last of its kind, was docked off the coast of Crete, they set out to restore it to its former glory so it could serve as a memorial.

The team spent months repairing the ship to resume full operation and set out to sail from Greece to Mobile, Alabama, but Andrus was benched at his doctor's request. He hopped right back on when it docked in the United States

USS LST 325 is open to tours at its home port of Evansville, Indiana, a former WWII shipyard. But Andrus saw grander plans for the restored ship: the beaches of Normandy.

So now he runs for fun and funds. He encourages supporters to donate on his website.

His last trip raised $33,000, but he's hardly raised anything on this run. Luckily, he has a little more time to make a dent.

He'll go for as long as he can

Andrus runs Mondays, Thursdays and Sundays, resting in between, for an average of 4½ miles each outing (down from the 6-mile standard he maintained on his first trip; at 95, he knows his limits).

He wakes before the sun rises to beat the heat and find a shoulder along a paved road where he can run safely. He's trailed closely by state troopers and his travel partner in their cars.

Some days, he runs undetected through town. But some cities like Jasper, Texas, or St. Simons Island in Georgia, greet him with crowds 2,000 strong.

He takes whoever's in his crew that day out to breakfast after the run and then quickly dozes off in his motor home. He'll rest, travel and explore along the way before his next outing.

It's a routine he'll keep up as long as his body allows.

He's determined to find out.

Running as a release

He made his first national tour solo. This time around, he's accompanied by friend and retired firefighter John Martin, who tracked Andrus down in California, where he'd bought a house after he finished his 2016 trip, and ran with him.

Putting down roots was the partial impetus for a second trip; he got bored of running the same trails in his neighborhood.

So the two set out in a motor home to make the trek again.

"I just needed to get back on the highway and have some fun in the years I've got left," he said.

But it's impossible to feel lonely now, he said. The friends he's made in his travels are motivation to keep running for as long as he can.

"There's a lot of good, loving people in this country," he said. "I'm on memory lane now."