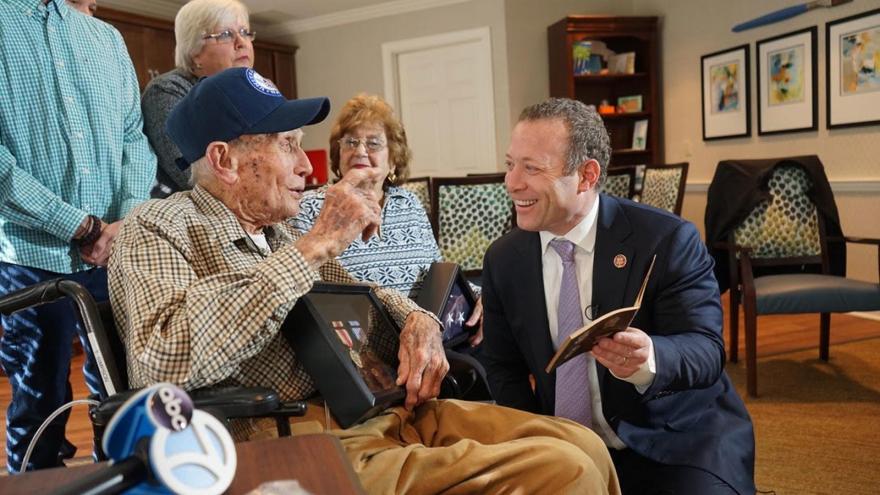 (CNN) -- A 92-year-old veteran finally got the medals he deserved decades after serving in World War II.

Thomas Simpson, who served in the Navy, said he was determined to get them after one of his grandsons asked him a question. "He came up to me and said, 'Pop Pop, what did you do during the war?' And I said, 'Someday, I'll get my medals and I'll show you,'" Simpson told CNN.

US Rep. Josh Gottheimer secured the medals and visited Simpson at the Sunrise of Old Tappan assisted living facility in New Jersey to present them.

"I know they're not medals for bravery or anything like that, but it just makes you feel humbled," Simpson told CNN.

Less than 400,000 of the 16 million veterans who served in World War II are alive and 294 are dying every day, according to the US Department of Veterans Affairs. That's why Gottheimer said he knew it was important to get Simpson his medals before any more time passed.

"It's an absolute honor and privilege to hear Mr. Simpson's story, and to thank him for his service to our great country," Gottheimer said in a statement. "After sacrificing so much, (veterans) and their families should never struggle to get the care or recognition they so rightfully deserve."

A sense of duty

When Simpson enlisted at the age of 17, he said he did it because, "I was just doing what the good Lord put me on Earth to do," he said. "Part of that was to protect my country and that's what I did," Simpson added.

He was sent to Okinawa, Japan, where he worked as a cook on a small amphibious barge called a landing craft tank.

After serving for a little over two years in the Navy, Simpson returned home, got married to his wife Dorothy and worked at the post office. Later, he joined the River Vale Police Department. "I was a cop for 10 or 12 years and then I was chief for 22," Simpson said.

Simpson is now retired so he has more time on his hands. But after receiving his medals, he said he's got a new way to pass time.

"I've been looking at (the medals) all morning," Simpson said. "They mean everything. (It feels like) I'm back in the Navy again."

Now, Simpson is finally able to tell his stories of World War II to his family -- all seven grandchildren and three great-grandchildren included -- and show them the medals to prove the tales.