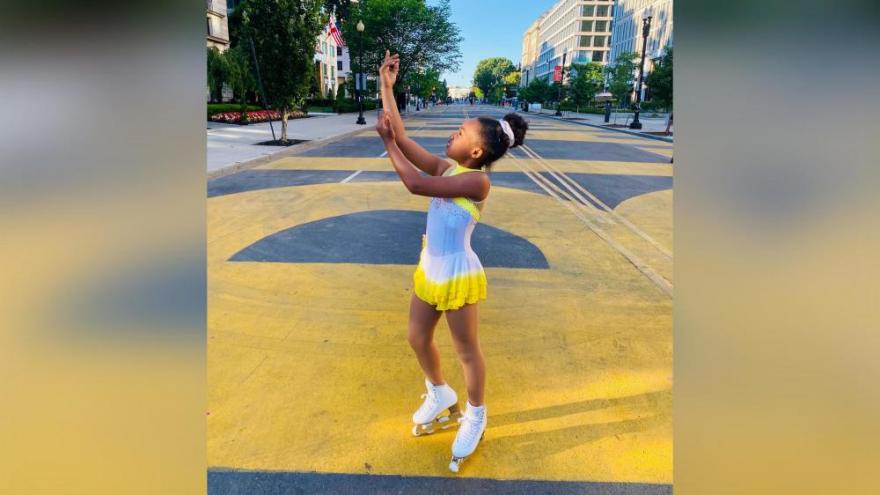 (CNN) -- A young figure skater channeled her emotions through a beautiful skate routine she performed over the Black Lives Matter mural in Washington, DC.

Nine-year-old Kaitlyn Saunders paid tribute to the Black Lives Matter movement with her routine, which she said was inspired by the many injustices that black people face in the United States.

"I want to replace the negative messages that people have in their minds with positive ones," Kaitlyn told CNN. "I feel free and powerful when I'm on the ice. Like I can fly and no one can stop me. I wish everyone could feel like that."

The young skater is used to performing on ice. But due to coronavirus restrictions that closed down rinks, she quickly learned how to take her talents to the streets on inline roller skates.

On June 8, Kaitlyn arrived at Black Lives Matter Plaza at 5:30 a.m., just minutes before sunrise, to perform her routine. With the help of her parents, she recorded the performance and shared it on Instagram and Facebook.

In a dazzling white and yellow outfit, Kaitlyn glided freely to her favorite song, "Rise Up" by Andra Day, while skating atop the painting.

The massive banner-like mural spans two blocks of 16th Street, a central axis that leads southward to the White House. Each of the 16 bold yellow letters spans the width of the two-lane street, creating an unmistakable visual easily spotted by aerial cameras and virtually anyone within a few blocks.

"My daughter has been watching neighbors, friends and people she's never met around the world stand up to inequality and injustice and say, 'You matter and we care,'" Katrice Saunders, Kaitlyn's mom, told CNN. "I want her to not only watch that movement grow and grow, but I want her to be an active contributor and force for change."

This is Kaitlyn's fifth tribute performance. In January, Kaitlyn skated to "Respect" by Aretha Franklin as a tribute to diversifying the sport of figure skating.

In February, she performed to both "Freedom" by Beyoncé and "Freedom" by Pharrell Williams for Black History Month. In April, Kaitlyn created a skate routine to "Smile" by Lady Gaga as a tribute to the frontline workers during the pandemic.

Through skating, Kaitlyn hopes to spread joy and bring awareness to issues of justice and inequality -- one routine at a time.