A 9-year-old created a portrait of John Cena with 750 Rubik's Cubes. His 'superpower' helped 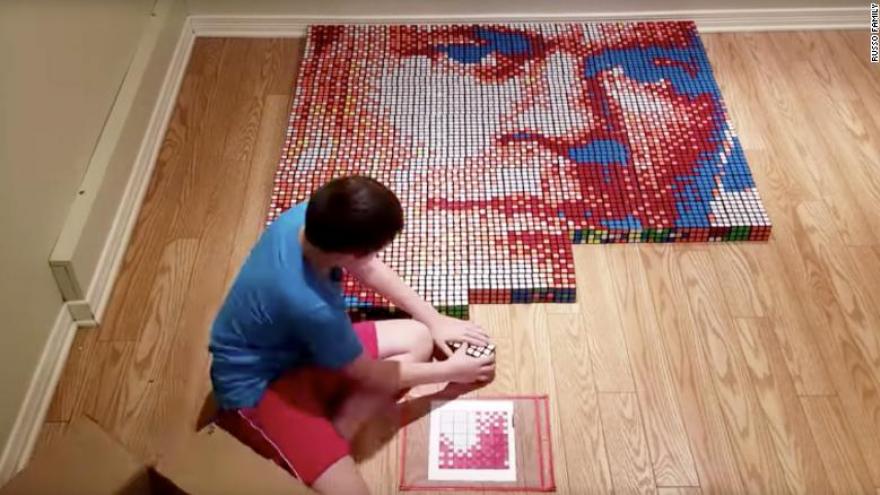 A new video involving John Cena is going viral, but it isn't of the popular wrestler bodyslamming one of his opponents. No, it's 9-year-old Benjamin Russo creating a huge portrait of Cena with 750 Rubik's Cubes.

(CNN) -- A new video involving John Cena is going viral, but it isn't of the popular wrestler bodyslamming one of his opponents. No, it's 9-year-old Benjamin Russo creating a huge portrait of Cena with 750 Rubik's Cubes.

The video starts with Benjamin holding up a series of cards, in which he explains he has dyslexia and struggles with reading and writing. "I mix up my words. I get very frustrated and upset too sometimes," the cards read. "But having dyslexia also means I can do something amazing! Like this..."

The video then shows Benjamin configuring hundreds of Rubik's Cubes into specific patterns. At the end of arranging all 750 cubes, the patterns come together to reveal an enormous portrait of Cena himself.

Then, Benjamin lifts up two more cards. They read: "Dyslexia is not my disability. Dyslexia is my superpower."

The process took five hours, Benjamin's dad, Louis, told CNN. "My wife and I looked at each other and said, 'Just how does he do it?' It's just incredible to watch," the proud father said.

"This is the embodiment of #NeverGiveUp," Cena tweeted. "Benjamin demonstrates courage, perseverance, vulnerability, tremendous strength... and he's an ARTIST!"

Cena even called Benjamin "a hero of mine" when he appeared on CBS' "The Talk" on Friday.

A message of positivity, not disability

Dyslexia is a common learning disability that results in difficulties with specific language skills, particularly reading, according to the International Dyslexia Association.

Benjamin's dyslexia makes homework and school a struggle, but it also allows for his amazing talent to shine through, his mom, Melanie, explained.

"Dyslexic brains are very different. The right side is really strong, so they can be very artistic, very musical. I truly believe that he has this amazing ability because of dyslexia," Melanie told CNN.

Unfortunately, because the family can't buy 750 Rubik's Cubes every time Benjamin takes on a new project, the John Cena portrait had to be taken down. But Benjamin has already completed his next one -- it's none other than Keanu Reeves.

"The general public sees dyslexia basically as flipping words around, flipping letters around, and that's where it ends," Louis said. "We never talk about the advantages and the special gifts that many dyslexics have, and Benjamin is not alone. So I think that's what we're trying to do is get the positive out there and not so much the negatives."