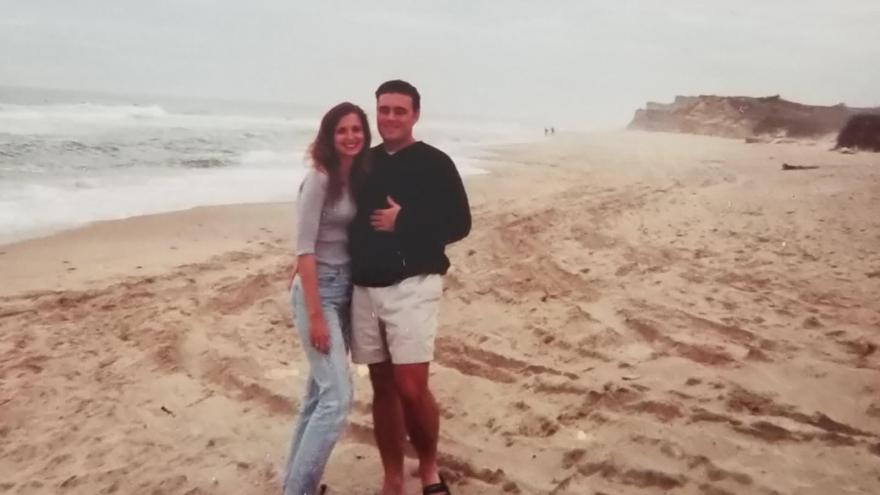 Monica Iken-Murphy wanted her husband, who was killed on September 11, to always be part of her life. So she used the diamonds from her wedding ring to create a new one when she remarried.

(CNN) -- Monica Iken-Murphy wanted her husband, who was killed on September 11, to always be part of her life. So she used the diamonds from her wedding ring to create a new one when she remarried.

Now, she is pleading for the return of her ring and two diamond bands that disappeared last month after she left them on night stand in a home a co-worker rented in Westhampton, New York. Iken-Murphy said she reported the rings missing to Southampton police, who are investigating them as stolen.

"I just need my rings," Iken-Murphy told HLN's Lynn Smith on Wednesday. "It's not about money for me. It's about how meaningful they are, and what significance they have."

There is a reward of $10,500 for the return of the rings, Iken said. Most of the money comes from two donors, including a board member of September's Mission, the nonproft Iken founded in 2002 that seeks to preserve the legacy of the terrorist attacks victims, including first responders who have died from 9/11-related illnesses and those who continue to suffer.

Iken-Murphy met her late husband Michael Iken on Sept. 11 1999. They were married for 11 months when Iken, who worked as bond trader at Euro Brokers on the 84th floor of the World Trade Center's South Tower, died in the terrorist attack. He was 37.

He called her on the day of the attacks to tell her everything was okay.

"The last thing he said was 'people are jumping out the window, I have to go'," Iken-Murphy said in a video she posted on Twitter.

Years later, she fell in love with Bob Murphy, a New York firefighter. They married in 2006.

Iken-Murphy said she designed the new wedding ring with the diamonds from the ring Michael Iken gave her to make sure he would always be a part of her life.

Her new husband lost fellow firefighters on 9/11 and understood her desire to carry Iken's spirit into their union.

"I didn't choose for the tragedy to happen in my life," she told CNN in an interview. "I didn't move on. I moved into the life I was given."

The Pope even blessed the rings at a ceremony at Ground Zero in 2015 that Iken-Murphy attended with her two young daughters.

Iken-Murphy celebrated her late husband's birthday Sunday at Ground Zero with his favorite Merlot. He would have been 55.

"I do everything in his honor, carry his spirit and his legacy so that my girls ... can continue that for me," she said of her daughters, 13-year-old Madison and 11-year-old Megan.

Iken-Murphy had hoped to pass the ring on to her daughters. That way, the love keeps going she said.

"They will always have that ring from the union of two souls," she said.