A deadly earthquake has most of Puerto Rico with no power, no water and residents fear tremors will bring more destruction 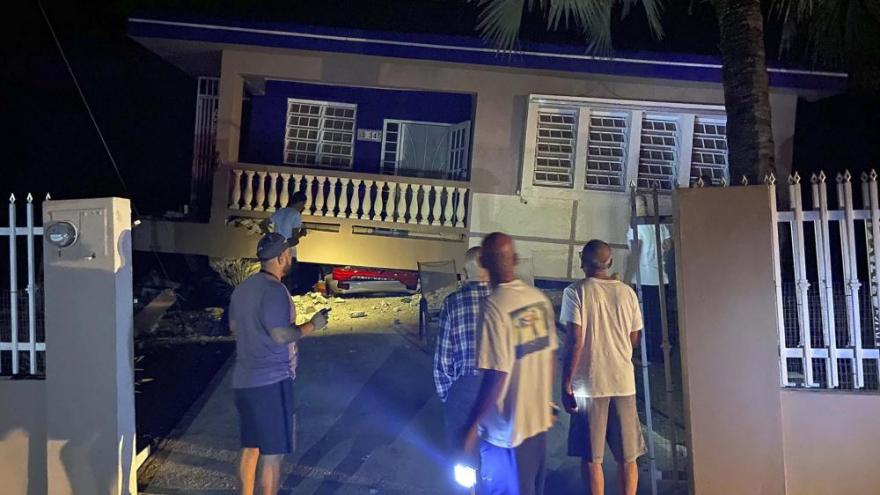 Power outages and damage to homes and buildings were reported near Puerto Rico's southern coast after a 6.4 magnitude earthquake and several other strong tremors rocked the island.

(CNN) -- Hours after a deadly 6.4 magnitude earthquake rocked Puerto Rico, people on the southern coast fear more homes could soon collapse and most of the people on the island remain without power.

Tuesday's quake -- the strongest and likely the most damaging of a series of quakes that have hit the island since December 28 -- left a man dead, caused dozens of homes and structures to crumble and cut power and water service to swaths of the island.

Gov. Wanda Vázquez Garced declared a state of emergency and activated the Puerto Rico National Guard as she pleaded with people to remain calm and prepare for aftershocks.

"We have responded to many difficult situations, and here we are once again ... helping our people move forward," Vázquez said.

Engineers were working to reestablish service to close to 300,000 of the island's 1.1 million utility customers who were without water service Tuesday, Vázquez said.

The 6.4 quake struck at 4:24 a.m. (3:24 a.m. ET) while most were still asleep. It centered just off Puerto Rico's southern coast, about 6 miles south Indios, a town of a couple thousand people, the US Geological Survey said. Several aftershocks have followed, including a magnitude 5.6 temblor striking just south of Indios at 7:18 a.m., USGS said.

In the town of Guanica, families sat on white plastic chairs and cots in the parking lot of the Mariano "Tito" Rodriguez Municipal Coliseum. About 255 have been taking shelter there since a 5.8 magnitude quake shook the US territory on Monday but officials now fear the building it's not stable.

"My home is like a hammock," said Hector Cruz, a resident of Guanica. "It's like a drill coming from underneath the home."

The earthquakes come more than two years after Hurricane Maria devastated the US territory in September 2017 and many in southern Puerto Rico said the earthquakes damage had been worst.

"There's no warnings for this," he said about the earthquakes. "A hurricane gives us time to plan ahead."

When asked about what concerns him the most about the aftermath of the earthquakes, Escalera said, "It's our homes... that homes will not be safe to live in and the possibility of a collapse that will cause a person's death or serious injuries."

In the city of Ponce, roughly 15-mile drive east of Indios, a 77-year-old man was killed and at least eight others were injured Tuesday, Ponce emergency management director Angel Vasquez said.

More than 400,000 of Puerto Rico's 3.1 million people would have felt strong or very strong shaking, the USGS estimates, though the entire island would have felt lesser effects.

Zulma Bracero, deputy mayor of Guanica, told CNN that authorities were providing tents to help residents sleep outdoors on Tuesday night. She said nothing seems safe and the situation is worse than the aftermath of Hurricane Maria.

Riko Gonzalez and his parents were sleeping in their home in Yauco, near Indios, when the 6.4 quake struck. They awoke to a rumble and scurried out of the house. China and glasses were smashed on the kitchen floor, he said.

It was "horrible, nothing compared to the (magnitude) 5s from yesterday," Gonzalez told CNN.

"People are afraid to go to bed, to then be woken up to worse earthquakes than the day before," he said.

In Guayanilla, just north of Indios, parts of the Inmaculada Conception church were in ruins Tuesday. Part of an exterior wall collapsed, and piles of rubble lay on the ground, pictures posted to Facebook showed.

The Guayanilla area already was counting its losses from a day earlier. A significant tourist attraction, the picturesque Punta Ventana rock formation and arch on the coast, collapsed because of Monday's shaking, the mayor said.

In Ponce, workers at Damas hospital were evacuating all patients Tuesday morning except for those in intensive care, the facility's Executive Director Dr. Pedro Benitez told WAPA.

"(Patients) were running around the hallways, so we had to get them out of the building for their own safety," Benitez said.

It could be the worst quake in more than 100 years

Tuesday's quake continues a series of seismic events that have shaken Puerto Rico across 11 days. Hundreds of small earthquakes have hit the island since December 28, the USGS says, including at least 29 over magnitude 4.0.

Monday morning's 5.8 tremor struck just south of Indios. While that quake damaged some homes in Guanica and Guayanilla, no serious injuries were reported.

The earthquakes since December 28 appear to have been foreshocks to Tuesday morning's largest quake, CNN meteorologist Pedram Javaheri said.

Tuesday's quake "will trigger aftershocks, but these will decrease in frequency over time," the USGS said in a news release.

It likely will be the island's most damaging earthquake in more than a century.

In 1918, a strong quake shook Puerto Rico and caused a tsunami, resulting in 116 deaths and economic loss of $4 million, two times the annual budget for the whole island at the time, according to the Puerto Rico Seismic Network. That's about $73.4 million in buying power today, according to the government's Consumer Price Index inflation calculator.

This is the largest earthquake to hit Puerto Rico since 2014, when a 6.4 magnitude quake struck 61 miles northeast of the island. That quake briefly disrupted power and caused only minor damage to Puerto Rico, as it was centered much father offshore than Tuesday's earthquake.

It's unclear what the full extent of the damages in Puerto Rico be but experts say the island could need hundreds of millions of dollars in aid.

Chuck Watson, an analyst with Georgia-based Enki Research, a disaster research group, said the quakes could cost the island up to $3.1 billion in economic losses.

The estimate accounts for damage to both public and private property, as well as lost tourism, wages and business due to power outages. USGS has estimated the earthquake could cause economic losses greater than $100 million.

Watson says his estimate includes how multiple aftershocks can potentially damage weak structures, as well as the lingering damage left by Hurricane Maria. Some of the infrastructure damage is still not rebuilt following the 2017 storm, the American Society of Civil Engineers has said.

Following the damage from hurricanes Irma and Maria in 2017, Congress appropriated $42 billion to the recovery effort in Puerto Rico, $16 billion of which went through FEMA, $20 billion through Housing and Urban Development, and the remainder through more than a dozen smaller agencies.

Only about $14 billion of these funds have been spent.