A 6-year-old is making clay koalas to raise money for the Australian fires. He's raised over $100,000 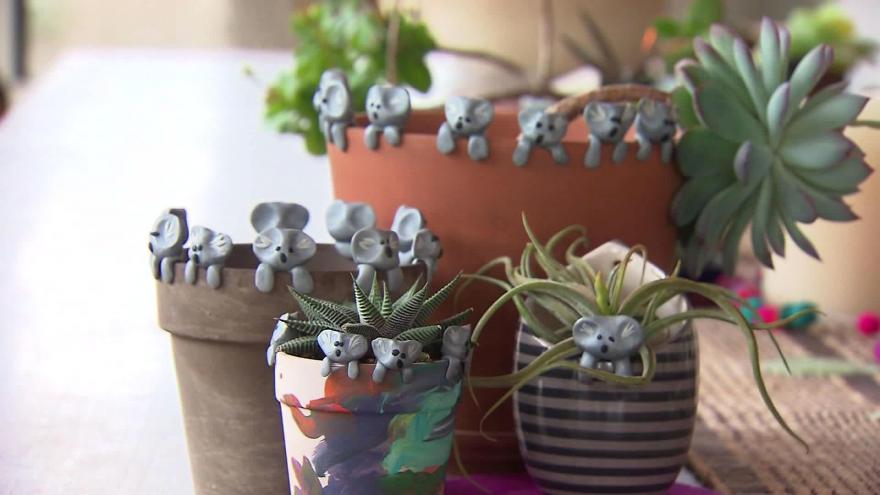 Owen's clay koalas will go to the homes of people who donated $50 or more.

(CNN) -- One little boy has done so much to help his animal friends in Australia and he's doing it by making one clay koala at a time.

Owen Colley, a 6-year-old from Hingham, Massachusetts, was upset to learn about the Australian bushfires two weeks ago, his mom Caitlin Colley said. He asked if any animals had been hurt in the fire and his mom said yes.

Quiet, he left the room and drew a picture of a kangaroo, a koala and a dingo in the rain. The picture represented his wish for Australia, a wish for rain and wildfire relief, his mom said.

"It was really the first time Owen had made a wish for something other than Lego or something other than himself," Caitlin Colley told CNN on Tuesday. "We asked him if he wanted to help and ... together we came up with this. We could make some clay koalas and give them in response to donations from friends and family."

Owen started making little gray koalas out of clay and his parents set up a way for people to donate to Wildlife Rescue South Coast, a wildlife rescue group in New South Wales. The Colley family is sending one of Owen's koalas to each person who donates $50 or more. So far, he's made about 55 clay koalas.

As of Tuesday evening, Owen has raised more than $20,000 for the rescue group in just a week, his mom said. It started with $1,000 in donations via Venmo in an Instagram post, which was their fundraising goal. It got so big that the family launched a GoFundMe campaign.

Nearly half a billion animals have been affected by the fires in NSW alone and millions of them are potentially dead, according to ecologists at the University of Sydney. Birds, reptiles and mammals, except bats, are among those affected. Insects and frogs aren't included in that number.

He wants people to know more about Australia

The kindergartner knows a lot of animals from Australia and he can prove it. He rattled off a list of animals: Tasmanian devil, kangaroo, wombat, kookaburra and koala.

While it's about helping the animals, Owen is also helping because he has a connection to Australia. His father, Simon, grew up in the suburbs of Sydney and Owen even lived in Australia for a few months when he was a toddler.

"He has a pull to Australia," Colley said. "He's very proud of the fact that he lived there. I don't think he remembers any of it but he's proud of it."

Owen talked about missing Australia and wanting to go back. His mom said he was sad when she told him it wasn't a good time to go because of the fires.

Making each koala with 6-year-old hands

Owen already enjoys making clay creations, so making these special koalas for a good cause made sense, Colley said. His mom made a sketch of the koala, an iconic Australian animal, and together they created the design for the clay creatures.

It takes 3 or 4 minutes to make each koala. Making the koala heads is Owen's favorite part, he said.

Owen uses silver Sculpey clay to make the koala's head and body. He adds white clay to make its fluffy ears and black clay to shape the animal's face.

The koalas bake in the oven at 275 degrees and that takes 17 minutes, Colley said. The creations are called Owen's clay koalas.

So far, Owen has made about 55 koalas. The only problem is that he ran out of clay. His mom said she's bought all the Sculpey clay she could find within a 20-mile radius and they're waiting for more to ship in.

"We're seeing all of the donations coming in and we're like, 'Oh my gosh, we don't have the clay,'" Colley said. "We have every intention to fulfill every koala, it just won't happen by tomorrow. It's a 6-year-old using his little hands to make the spaces and the ears, so it does take time."

The donations range from $5 to up to $150, Colley said. Donations that earn an Owen-created koala have come in from just about every US state, Colley said. Mom and dad will pay the shipping costs of the koalas when they're ready to be sent out.

Owen aspires to help more organizations and help animals across Australia, Colley said. The family is looking at how to do that.

Owen's parents are explaining the online campaign in a way he can understand it. Every $25 raised helped feed a joey for a month. A joey is Aussie slang for a young kangaroo. They've helped hundreds of joeys thus far.

Colley hopes that other parents and children can find ways to help with those affected by the bushfires.

"Anyone can make a difference and when we come together we can make an even bigger difference," Colley said. "I just I love the idea that maybe other kids can take this to their communities and sell little clay koalas locally and raise money for this great cause."

Update: Since this story published, Owen has now raised more than $100,000 for Wildlife Rescue South Coast, as of Thursday afternoon.