A 6-year-old boy opened a lemonade stand after his dad died, so he could treat his mom on a date 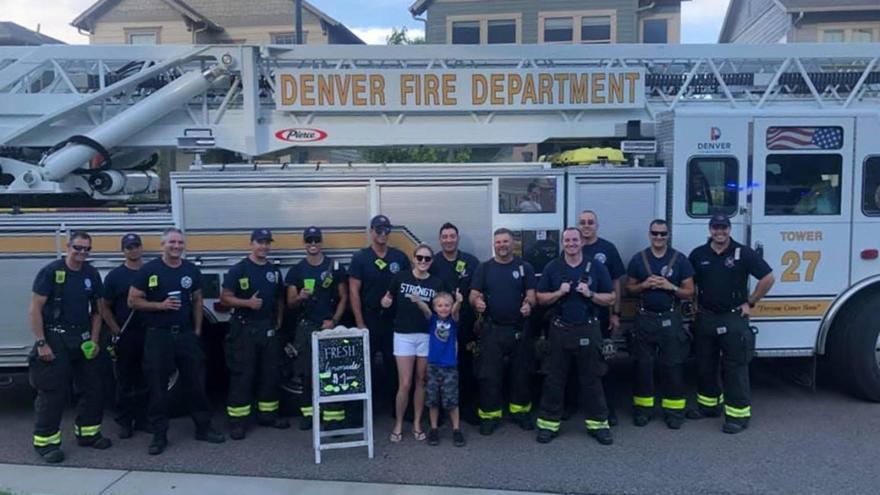 Brady Campbell promised his dad that he'd look after his mom, so the 6-year-old boy opened a lemonade stand to make money to take her on a date.

(CNN) -- Brady Campbell promised his dad that he'd look after his mom, so the 6-year-old boy opened a lemonade stand to make money to take her on a date.

His dad, Brandon Campbell, passed away on July 7 after a six-month battle with Stage 4 colon cancer. He was 37 years old.

The next day, Brady insisted on selling lemonade, outside their Denver, Colorado, house, his mom Amanda Campbell told CNN. She said he told family members he wanted the money to take her on a date.

"I think he kind of came up with it himself," she said, adding he's "so very sweet."

Brady and his dad had been planning the lemonade stand for weeks and had made the signs together.

"it just never really happened because it was raining or Brandon was feeling too sick," she said.

"My dad and I came up with the idea of a lemonade stand to take my mom on a date because I didn't have enough money and I wanted to pay, so I did it," Brady told CNN affiliate KDVR.

Friends and family came by to show their support and a Denver police officer stopped to see what was going on.

That officer put in a radio call to other first responders who came to the stand.

"We had fire trucks and police cars and tons of officers and firefighters and they let him spray the hose and took him up in the big tower and he just had a blast, Campbell said.

She said Brady was a savvy businessman and made $244.

"My husband would be proud because he was a very successful businessman, so I'm sure he would have loved that," Campbell said.

A neighbor has set up a 'virtual lemonade stand' on GoFundMe that is raising money for the family and for cancer research.

She said she'll plans to give those donations to the Brandon Campbell Memorial Fund at the University of Colorado Anschutz Medical Campus and Colontown, an online community for colorectal patients, survivors and caregivers.

They haven't gone on their date yet, but Campbell said her son has plans.

"He's kind of scheming with a friend of ours, of what he wants to do," she said. "He does want to take me out every week."

Brady starts first grade soon and Campbell says he misses his dad, but is very resilient.

"He's been tough and he's been more concerned about me," she said.

She said it was hard for him to watch his dad -- a marathon runner who got up at 4 a.m. every day to work out -- suffer with cancer.

"That brings, I think, Brady a lot of peace and me peace."

Campbell said that she hopes that the attention their story is getting will raise awareness and encourage people to get tested for colon cancer.