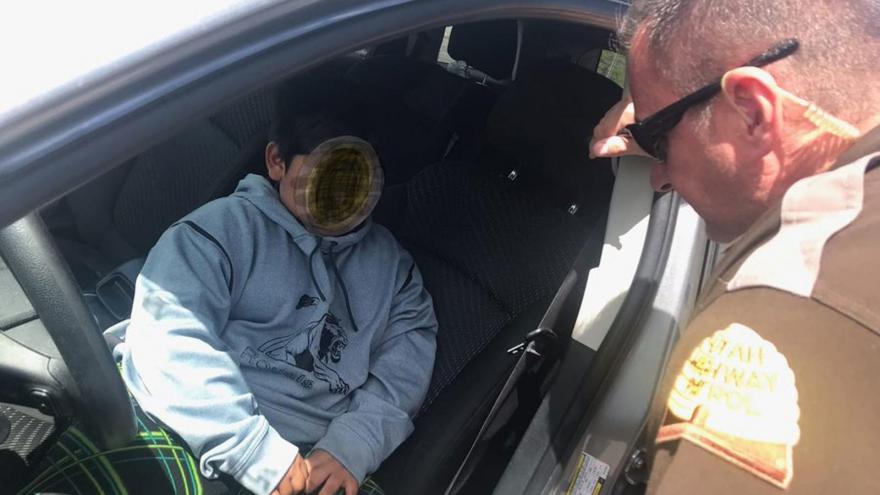 A 5-year-old boy was pulled over by the Utah Highway Patrol while driving his family's vehicle by himself Monday, May 4, 2020. Troopers obscured the child's face in the photo.

(CNN) -- A 5-year-old boy with $3 in his pocket was pulled over by Utah police while driving his parent's car to California to buy a Lamborghini.

The boy left in the SUV after arguing with his mother, who said she would not buy the luxury car for him, Utah Highway Patrol said on Twitter.

A trooper spotted the vehicle weaving on Interstate 15 at 30 mph, the Utah Highway Patrol said.

"How old are you? You're 5 years old?" Trooper Rick Morgan says in dash camera footage of the traffic stop. "Wow ... Where did you learn to drive a car?"

Morgan told KSL-TV he had to help the child get the SUV into park.

"He was sitting on the front edge of the seat so that he could reach the brake pedal to keep the car stopped while I was standing there," he said.

Once he was pulled over, the child told the trooper he had intended to drive to California to purchase a Lamborghini for himself. He had $3. The starting price for a new Lamborghini is around $200,000.

Morgan says no one was hurt, and it will be up to the local prosecutor to decide whether to file charges against the parents, who had left the boy in his sibling's care while they were away from home.